We have rented a few leased lines that present themselves as a layer 2 network, i.e. you have one big pipe at the datacenter and the remote sites have smaller pipes. Inside the layer 2 network you can do whatever you like. Probably they use 802.1ad to give each customer their separate network inside their network. AFAICS most sites are connected via plain VDSL.

We decided to put a router at each site, and give each site its own VLAN. The firewall at the DC thus has as many VLANs defined as there are sites. Each site thus uses its on address range in its own VLAN. 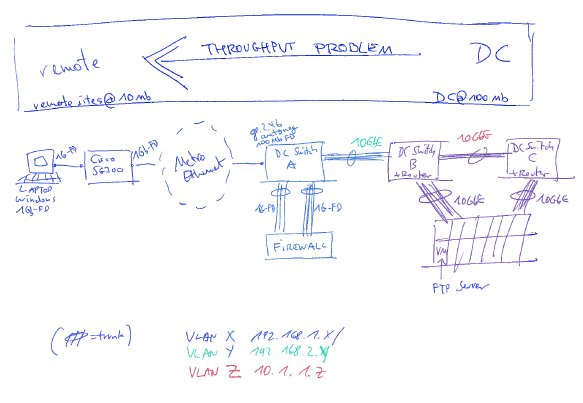 Now, we are faced with throughput problems:

It does not matter which side initiates the transfer. The only consistent thing is that one direction is not working well. Too bad it is the direction toward the site because that would be the bandwidth we need most as we'd like to use terminal server clients.

About 10 seconds into the transfer, the throughput drops. We see DUP ACKs when sniffing. Which maybe leads me to rate limiting at the provider's end?? (Currently, they don't have a clue, and I like to make sure we're not at fault before escalating)

NOTE The remote sites are limited to 10Mb somehow. Setting the switch-to-Metro-port to 10Mb doesn't help either. In fact it's the worst then (max. 30 KB/s). Setting to 100Mb works fine but already starts to produce the outlined problem. Same for 1G.

Captures of the problem can be downloaded here:

In the image you see the Wireshark IO Graph with some error details:

In case the other side initiates the transfer (i.e. put from dc, instead of get from remote), the problem remains unchanged.

Please indulge me with what you think could be the problem here.

This must be a congestion control thing.

The first "1G->10M" is the "invisible" 10M at the remote site, where everything including the uplink port speed is set at 1G, even though there's only 10M behind it (being sold).

However the 100Mbps at the DC are real 100Mbps, the interface is configured at 100Mbps on the physical layer.

We see the packet loss increasing with incrementing bandwidth (when approaching 10Mbps we have 0.93%, starts to be critical... and would also explain why TCP has problem performing)

We are not oversubscribing the DC link since it's at 100Mbps and cannot send more than 100Mbps. However the remote sites are at 10Mbps.

Why can't TCP handle that all on its own?

Update #3 I have now used the following scenario:

Here is the packet loss in the DC->remote direction: (iperf 9 Mbps UDP test)

The other direction is fine. However, when running a TCP test the remote->DC direction does not perform much better than the DC->remote direction (about 5Mbps).......

I'm not sure we reached the bottom of this.

Short story, you need to control the speed mismatches on both sides of your metro Ethernet links... I redrew your diagram for the sake of clarity... Note 1

FYI, if your provider implements MEF-compliant services, they are not shaping, they are policing. TCP traffic tends to perform better with shaping.

The need for your own QoS

You seem to question the need for qos, so I will quote from the MEF "Understanding Carrier Ethernet Throughput" Whitepaper, page 9... by way of review, the customer in the MEF Whitepaper's Figure 2 has a better situation than you do... they purchased a 50Mbps CIR, but their UNI is delivered on a 1GE... your remote site has a 10Mbps CIR on a 1GE UNI.

Responding to other TCP questions in an edit...

We are not oversubscribing the DC link since it's at 100Mbps and cannot send more than 100Mbps...

I disagree, you can send microbursts at 10GE because your DC has 10GE links, but the metro UNI is 100Mbps. One open question is how much buffering you have on your Enterasys LAN switch (Switch A) when you make the transition from 10GE to 100M.

Why can't TCP handle that all on its own?

TCP handles things by slowing down when it sees packet loss... it really slows down (and may abort the connection) for serious packet loss. So, TCP is doing what it should... as a network engineer, your goal is to build a network with conditions that make TCP happy.

Other TCP questions from chat

Marki said: I don't understand what is being dropped where and by whom and why and why TCP doesn't simply handle the fact that there is (real) 100Mb at one end, and only 10Mbps at the other.

Regarding TCP's need for buffering, and the consequences of no buffers:

Fact number 1: TCP needs buffering for speed transitions because it's designed as a feedback-control system.

Using a driving analogy: as good drivers we always leave a few seconds worth of space between us and the car in front of us; in some ways, that space between cars is roughly analogous to a network buffer. If the person in front of us slams on the brakes when an animal runs in front of them, the space between our cars (hopefully) prevents us from hitting their car. We leave space because it takes time for our eyes to see the brake lights, our foot to react, and the brakes to dissipate enough heat; our eyes give us a visual feedback control system.

Likewise, when an FTP session is blasted out at 10GE, bursts of traffic could be up to 4MB long (in your case) due to of TCP scaled window-size before the socket must stop and wait for a TCP ACK. Meanwhile if the 10GE stream of traffic suddenly hits a "Fast Ethernet", TCP needs to gradually slow down. Deep buffers in network gear allow TCP to drop far fewer packets when it makes speed transitions; however, if you have no buffers, you could drop perhaps 99% of that 4MB TCP window when it's throttled from 10GE to 100M. Think of that severe 99% loss as a TCP socket crash; TCP reacts predictably to relatively gradual packet loss. TCP to reacts much less predictably to ongoing, severe packet loss Note 3.

To the question of why you shouldn't use an asymmetric Metro Ethernet CIR with 100M at the DC and 10M on the remote, ask yourself a rhetorical question "who is buffering that 100Mbps traffic burst when it hits the cheap 10Mbps Ethernet NID that your metro-ethernet provider gave you?"... (hint: nobody is buffering).

If nobody is buffering the large (see Note 2) speed transitions then those points are potential places to intermittently drop traffic.

What is being dropped by whom:

When TCP traffic leaves the data center, there are three places it could be dropped:

When TCP traffic goes to the data center...

How to mitigate the speed mismatches:

There are two key points to remember about iperf (all information based on iperf version 2):

The output above clearly shows problems in the DC to remote direction; we should expect to see 9Mbps or more when things work well (i.e you expect at least 90% of capacity - 10Mbps at the remote site). Now, let's look at traffic in the opposite direction (when iperf pushes data from the remote site to the DC)...

You're able to send around 80% of your remote CIR's capacity, but that's still less than what I expect.

marki said: Don't forget, the problem only shows itself when the flow is 100Mb->10Mb, not the other way round.

The problem shows itself in both directions, but the iperf symptoms seem to be worse in the DC -> remote direction. See my analysis of the iperf output above.

To make this concrete, let's look at your FTP pcap when pushing a file from your DC FTP server (130.1.6.4) to the remote site (192.168.191.2). The transfer from the 100M metro ethernet side gets limited at several points during the transfer. You can see this if you look at the dc-to-remote_remote-side.pcapng pcap, and filter on expert.message contains "segment not captured" 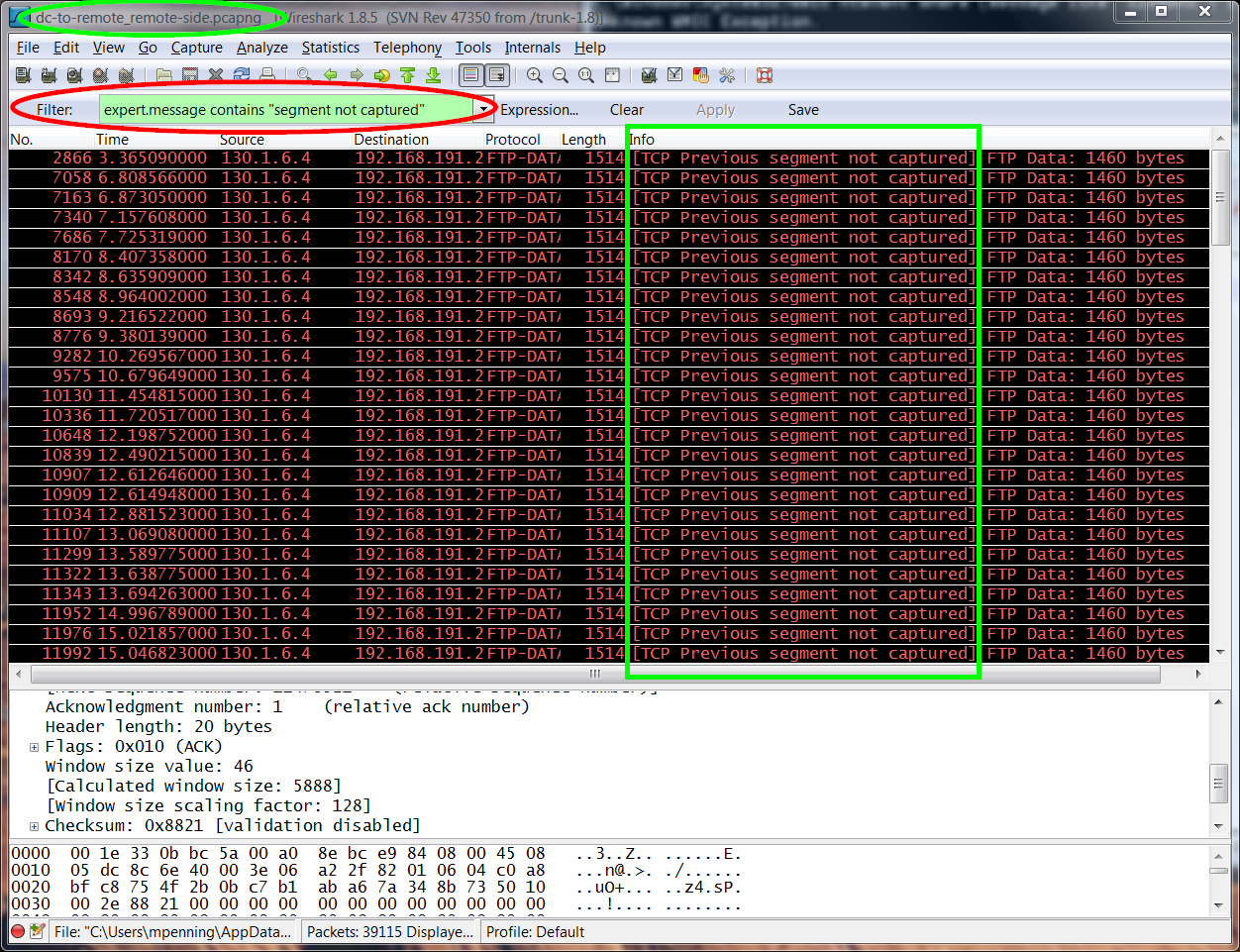 Note 1 I choose CBS values of 25KB per 1Mbps MetroEthernet CIR; this is a common ratio used by providers... YMMV
Note 2 My personal rule: "large" is a speed transition that is significantly larger than a 10:1 speed transition
Note 3 I can't give hard numbers for what is and isn't too much packet loss for TCP. If the loss is bad enough for your applications to suffer, then it's too much. My personal rule: When dealing with a wired corporate network completely under my own control, any (unintentional) packet loss is too much. That said, there are some switch models that cut corners on buffering; these switches may occasionally drop packets... it’s a judgement call as to whether you have to live with the problem or buy better switches. FYI: It's not always obvious, but TCP periodically increases the transmission rate of a socket to ensure that it's getting as much throughput as possible; many TCP implementations know they are going too fast when they see packet drops.

While discussing this problem was very interesting, the ISP has in the meantime started exchanging the DSL modems on the different sites by another brand. Some packet fragmentation issue they say. And hey, 9.5 Mbps in both directions without any problems or special settings.

Not the answer you're looking for? Browse other questions tagged ethernet tcp troubleshooting packet-analysis metro-ethernet or ask your own question.