I have a requirement to build a network that has 3 internet feeds, 2 of which will be designated to VLANS 10-20 and the 3rd feed for VLAN 30 (only). I have in my posession the following hardware:

The problem arises in the fact that the ASA will not do policy routing and hence, need a router to do the routing to the relevant ISP's. I have a design in mind however am a little hesitant that it'll work and thus, would greatly appreciate if somebody could validate it.

I have a /29 and a /30 to each ISP; i'll be using the /30 to get to the public internet space, with the /29 being used for various services/clients sitting behind the switch, of which i'd like to have the ASA act as the NAT/inspection box. 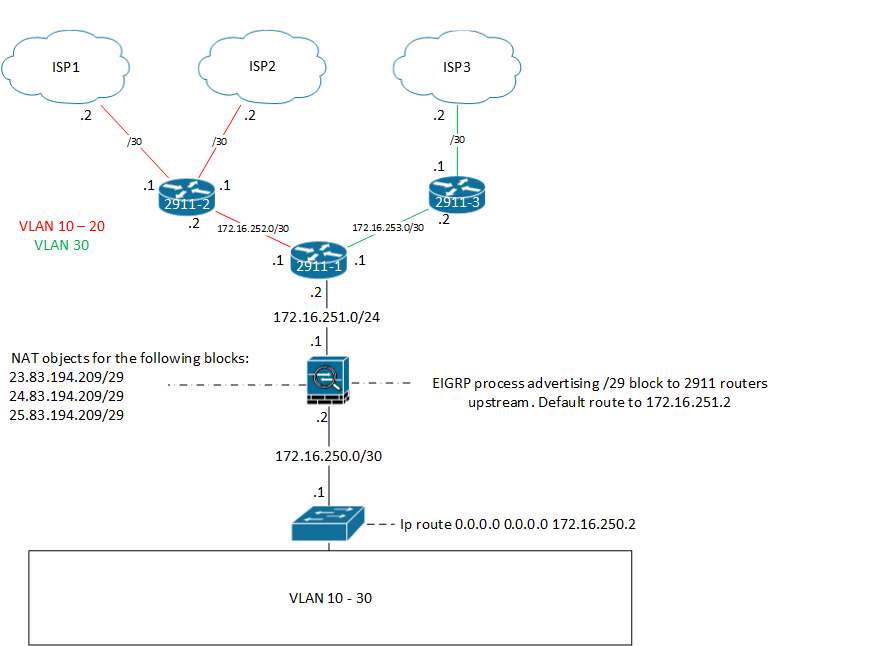 The plan would be to do a static NAT on the ASA for certain VLAN's to an IP on the 172.16.251.0/24 subnet, i'll then configure PBR on 2911-1 to match this source subnet and route it out the correct interface and hence, the correct ISP.

There is a requirement for VLAN10-20 to be able to failover between ISP's however i can easily implement IP SLA on 2911-2 to sort this out. As a worst case, if ISP3 was to be taken out by a backhoe, there would be a need to route this traffic out via ISP1 or ISP2, again, easily done by fixing policy route on 2911-1.

Given the design, it seems as though there are too many private networks between the 2911's however i could just be over-analyzing the layout.

I know there is a workaround to have the ASA do pseudo-policy-routing with the use of NAT rules, however i'd prefer a supported (and scalable) solution. So as it stands, my options are -

If anybody can lend me a hand, that would be excellent!

Your design in the diagram is a reasonable approach. Do policy-based routing on 2911-1, and do you NAT on the border routers.

An alternative, if you can use contexts, is to connect VLAN 30 directly to the ASA (either with a different interface, or use sub-interfaces and a VLAN trunk. Make the ASA the default gateway. Connect 2911-3 similarly with a separate interface. Now you can create a separate context for VLAN 30 traffic, and direct it to ISP 3. This may or may not be practical, depending on your situation.