I spent some time on this topic, but a lot of things is still unclear to me.

In this scenario two things can happen.

The Pre-fragmentation for IPsec VPNs feature increases the decrypting router's performance by enabling it to operate in the high-performance CEF path instead of the process path. An encrypting router can predetermine the encapsulated packet size from information available in transform sets, which are configured as part of the IPsec security association (SA). If it is predetermined that the packet exceeds the MTU of the output interface, the packet is fragmented before encryption. This function avoids process-level reassembly before decryption and helps improve decryption performance and overall IPsec traffic throughput.

I've checked what are the default settings in newer IOS and they are as follows:

So how does this reflect above statements? Is the pre-fragmentation turned off by default, or not? When should we use "ip mtu" on an interface and when not?

Things are even more confusing, if we add the chart from the cisco DocCD to the mix. http://www.cisco.com/c/en/us/td/docs/ios-xml/ios/sec_conn_dplane/configuration/15-mt/sec-ipsec-data-plane-15-mt-book/sec-pre-frag-vpns.html

If pre-fragmentation works by default, what is the purpose of "ip mtu" command? Any best practices?

I had a similar issue using a Static VTI IPSec tunnel. Initially the tunnel interface IP MTU was set to 1400 bytes with the "Crypto IPSec DF-bit clear" command set under the global configuration. The expected behaviour was for packets received (being forwarded to the VTI) should have the DF bit cleared and allow the packet to be fragmented before encryption is required. We found that any packets arriving with DF bit set that exceeded the tunnel IP MTU were being dropped and not switched to the tunnel interface.

After a long discussion with Cisco TAC it was explained that that VTI tunnels do not support fragmentation before encryption (as per bug ID CSCsr97396/CSCsh30577), This is apparently undocumented in any publically available Cisco documents including configuration guides... poor show Cisco considering this bug has been known since 2007!!!

The fix is to ensure the tunnel interface IP MTU is large enough (changed IP MTU to 1500) not to cause fragmentation. In the solution we deployed the egress interface is a point to point ATM interface (OC12/STM4 ATM SPA) with a default MTU of 4470 so no post encryption fragmentation will occur. 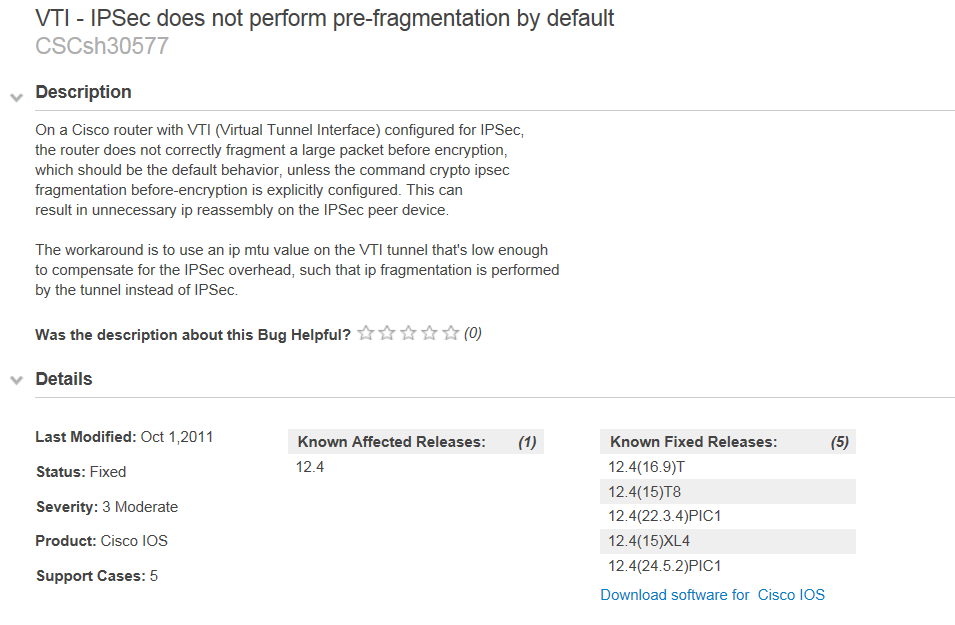 2
How many IPSEC P2 SA's can exist before tunnel performance is impacted, and why?
27
Exactly when is PMTUD performed? (Path MTU discovery)
4
IOS to ASA dynamic and static VPNs - sharing same crypto ACL?
1
MTU when creating IPSec Packets
1
Cisco ASA-5505 - Can ping the Internet from LAN connected devices, however I cannot ping from the LAN interface to the Internet
1
Huawei AR160 IPSEC over DSL Packet Loss
1
Cisco IPSec Pass-through on ASA 5505 not working
4
How IPsec tunnel mode work without GRE
2
Confusion about MTU