Does anyone have any experience running GNS3 locally (on Windows or Mac) vs the VM Workbench? I tend to have larger and larger topologies and my 4GB of RAM get pretty loaded...

Anyway, can workbench calculate and utilize the idle PC value efficiently, and is there a significant performance decrease when using the VM in comparison to a local install?

I'll go ahead and provide some more "in-depth" instructions on telling GNS3 to use a "remote hypervisor" (a dynamips instance listening on another machine).

You can even use this setup with Amazon EC2 (or another utility computing provider). A setup with a utility computing provider would also be extremely useful for testing out topologies with a very large number of routers, to see how OSPF may behave at scale, etc. I've documented how to do this at my last job (but this was before GNS3 was so popular) and we used it successfully for numerous scale tests. This would also be ideal for folks that don't want to spend the money on a high-end server but can afford to spend a few dollars for a few hours of "server time" for GNS3 labs, without chewing up CPU cycles on their home machines.

The following instructions assume your remote hypervisor is running Linux.

Step One: Set up your Linux box. 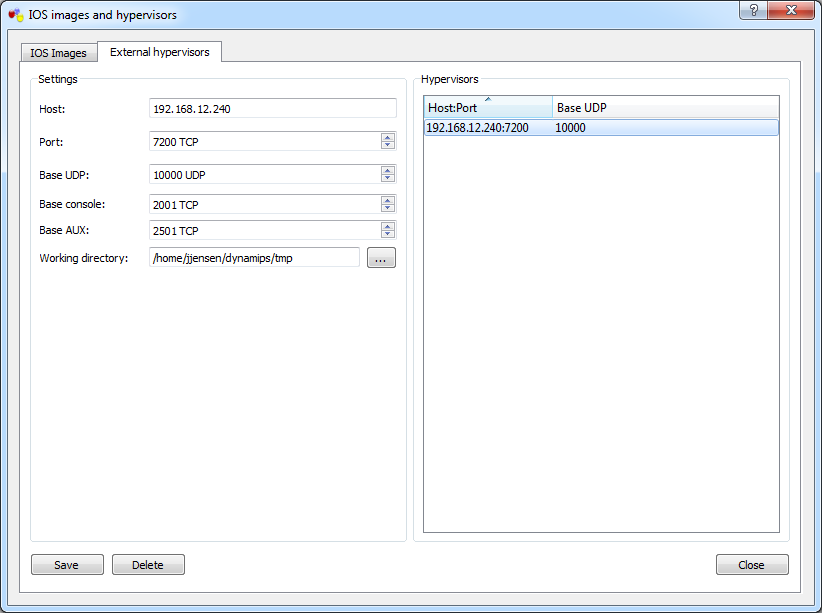 Once you have your remote hypervisor added, go back to the "IOS images" tab and add in IOS images. There are two important bits to remember: 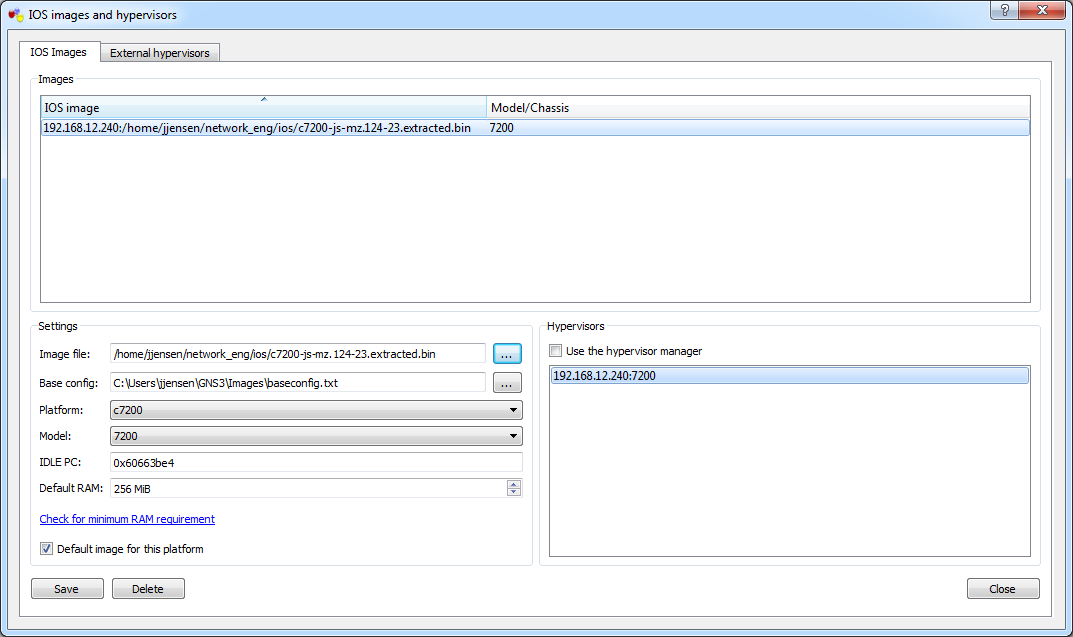 Once you have your IOS image added, start up Dynamips on your remote machine.

You should now be able to add devices to GNS3 topologies on your Windows machine, and GNS3 will communicate with the remote hypervisor on another machine. You also get the console access via PuTTy and such for free as well. Note that there isn't really a "configuration limit" on how you want to add your IOS images and hypervisors. You could even have it so that you have a separate remote hypervisor per IOS image if you wanted. Pretty powerful stuff.

If anyone could add additional answers on how to make this work with JunOS/"virtual" Olive, I think that would also be pretty useful. :-)

I've had a ton of success running either dynagen/gns3 on my local laptop, while dynamips sits on a remote linux server. My server has only 4Gb RAM and an AMD quad core, yet it handles 32+ router topologies with ease. Your .net file simply connects to a remote box. i.e. this part:

The latest betas of GNS3 now also supports idlemax and various other settings to tune youe environment even more. In the past you would've needed to edit the .net file outside of gns3

If you have a restriction on CPU/RAM then running GNS3/Dynamips/Dynagen natively rather than in a VM container is always going to use less resources.

The 'GNS3 Workbench' is only really useful when you are someone that perhaps can't install GNS3 on their machine or don't have the required skill (little) to get GNS3 setup yourself.

Not the answer you're looking for? Browse other questions tagged gns3 or ask your own question.