How to properly configure STP in this simple setup?

I know already that there is a chance that network packets "loop" in the "upper square", and that you have to use Spanning Tree Protocol (STP) to prevent loops.

Unfortunately, I don't understand how to configure this properly with VLAN ID's. I do not use VLAN's in my setup. Do you need to use them to make STP work?

R1 and R2 are both Cisco Catalyst 7200 routers. SW1 and SW2 are both generic L2 switches. ESW1 and ESW2 are L3 switches, which are running a Cisco 3725 IOS. In GNS they are called EtherSwitch. 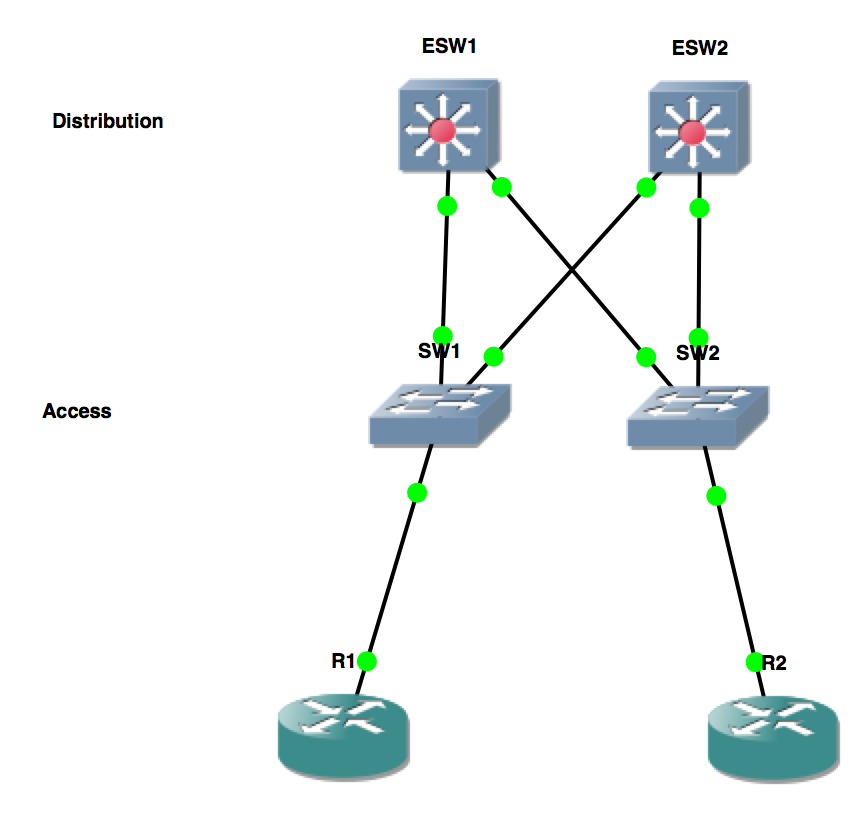 Add the following connections for the best possible redundancy:

Now you can lose either SW1 or SW2, and still have connection to your R's.

Just to clarify a couple of extra things, if you're interested:

Unless you're running some seriously ancient gear, Cisco typically runs STP in the default mode of PVST+ or RPVST+. This means that each VLAN you configured, will have it's own instance of STP running (PVST = Per Vlan Spanning Tree). This is helpful because let's say you have 2 VLANs, VLAN 1 and VLAN 10. If something breaks in VLAN10, it will adjust the paths accordingly, and leave VLAN1 completely unaffected, this means zero service disruption for VLAN1.

Just a little bit more older STP context, it used be that only a single instance of STP ran, no matter how many VLANs you had. That means, if you had a link in VLAN1 go down, all other VLANs would have disruptions because STP had to recalculate the loop free paths. This is why PVST is so important.

Along with each VLAN having its own instance of spanning tree, PVST+ adds some other capabilities. The important one being, alternate ports. Let's look at the difference of how an older version of STP would run vs. PVST+ when an outage event happens, if you had two interfaces, connecting the same two devices (in EACH VLAN, so lets just say you have VLAN1 only).

That blocking port doesn't know anything, if its up, it is only used if STP needs to recalculate.

The difference with PVST+ is in the initial calculation, when the loop free topology is built, redundant ports facing upstream to the root bridge will be an alternate port. This means that it KNOWS that the alternate port is a way to the root bridge, so should the primary link fail, it doesn't need to recalculate - it can immediately jump to the FORWARDING state and push traffic as normal, instead of being forced to run through all of the phases again.

Hope this helps, I apologize if it's a bit long winded - but it helps to know your options. If you need any clarification, feel free to ask.

Yes spannning tree is for preventing loops at layer2.

In this simple setup you may want to add a few of things:

You can then check your spanning tree root paths for vlan1 (default) on both sw1 and sw2. And add many other test vlans for your studies.

Note that should you shutdown sw1, your client R1 will still be cut off as it only has one link (path).

You could also consider researching/adding vtp version 2 to your scenario to propagate the vlans you create on ESW1 or ESW2 to the access switches.

Not the answer you're looking for? Browse other questions tagged cisco spanning-tree redundancy failover or ask your own question.

5
How can I determine the STP designated bridge on Cisco IOS?
14
STP blocking port selection
4
Help optimize a LAG with LACP and two different algorithms on each side
2
Adding a switch to provide redundancy
2
How fast can STP, RSTP, and MSTP find a new route?
3
How to prevent loop while trunking Fortigate and Cisco L2 Switches
2
Trying to configure STP on a small network and have a few questions
2
How should (per-vlan) STP behave when interconnecting access ports from different vlans on the same switch?
0
STP Loop with Third Party Switches