I have some pre-8.3 ASAs that I'm planning to upgrade to standardize on the new NAT semantics. I am aware of the big changes between pre-8.3 and 8.3+ from these two great Q&As.

What is unclear to me is how to choose from the numerous 8.3+ ASA software releases available to me. This is what the software release tree looks like in my Cisco support portal: 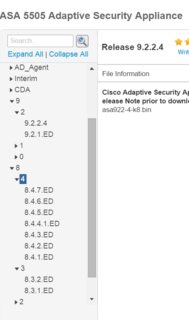 For IOS Cisco published How to Choose IOS Software Release which, among other things, defines the nomenclature for the version numbers (ie. format A.B(C)D) and software image type (ie. ED vs. GD etc). I have not found an equivalent document for ASA.

Surely there is some careful release engineering going on by Cisco to strive for stability in some ASA releases and new features in others. I haven't, however, found any document that helps me to sort between the two priorities.

I expect to read the release notes to establish what features are available in each release, but without other information I'd still be guessing at how stable each release is.

I guess I'm left with the following questions:

Absolutely, look at the open caveats in the release notes. For software that's been in the wild for a reasonable amount of time, the shorter the list of open caveats, the better. This has held true in my experience going back to 6.x.

ED = early deployment -- "Early Deployment releases offer new feature, platform, or interface support. Most non-major releases contain ED releases." This is a flag to tell you that there's something new--read the release notes as you say but it's usually benign in my experience. A fourth number (.x in your question) is a "interim release" that replaces another version previously released. For 8.4(4.1) ("8.4.4.1" above) there was a "build problem" with 8.4(4) so 8.4(4.1) was put out to replace it.

Maybe. I'd definitely say 8.4.7, as an example, would be more stable than 9.0 or 9.1, but a point-2 release could have reached sufficient maturity. It really depends on the open caveats and your specific config and use case.

dk1's answer was great. I just want to add one more thing: I think the most important thing to determine when choosing a release code is features. If there is a feature in 9.2 code you would make use of, then it doesn't matter how stable 8.4.7 is, because it doesn't do what you need it to.

I'm going to list the notable features for each code version that I know of, organize by major and minor release. I'll make this a community wiki so others can add to it as well:

(personal note: 8.3 changed the NAT, but you may as well consider it the rough draft and 8.4.2 the final. I would highly, highly recommend not using 8.3 for any reason)

7
Cisco Feature Navigator equivalent for ASA's?
7
Upgrading ASA and ASDM on a ASA5510
1
Checklist for replacing failed ASA hardware
1
Cisco ASA 5512 (OS 9.1(1)) HA failover issues
1
Cisco IOS versions vs Cisco ASA versions?
5
Advertise static route via BGP from Cisco ASA 5512-x
2
Why is it necessary to upgrade to ASA 8.4 on the way to 9.2?