OSI model and physical location of the layers

I understand that data passes down through the OSI model and then at the physical layer is transported as bits across the networkcables. But I'm confused at exactly where the layers are happening (in the PC, in the router etc ?). Does the processes at layers 7-2 happen in a PC before the data goes out on the cables as per layer 1? That doesn't sound right, as I know switches operate at layer 2 and routers at layer 3. But then wouldn't the data have already needed to go out on the cables to get to the switch or router? Thanks :-)

tl;dr Many different devices can encounter multiple OSI levels. Whichever end point is requesting something from a layer 7 protocol (like HTTP), will use all 7 layers before putting it on the wire. Intermediate nodes, like routers and switches might only use up to the first 3 layers, firewalls or WAN accelerators can affect layer 4, load balancers do interesting things as well.

If you're interested in a more detailed answer, look below - I tried(?) to keep it fairly simple, and use a real world example. 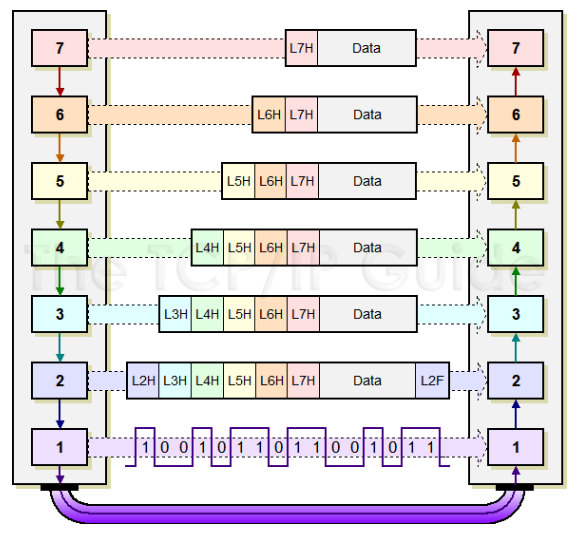 What layers encapsulate the data depends on what generates the data. In general, de-encapsulation will only happen for what is relevant to the data's current place in the network (on a router, on a host, etc.)

By this I mean, if I'm a router, I don't care that there is an HTTP request buried in this packet if all I'm trying to do is route traffic via Layer 3 - I will only strip off enough headers to get what I need, do my job, and move on to the next packet.

We all use the internet everyday in some way, so here's what a typical HTTP request will look like, taking the OSI model into account. For simplicity's sake, we can assume the network is available and there aren't any problems. 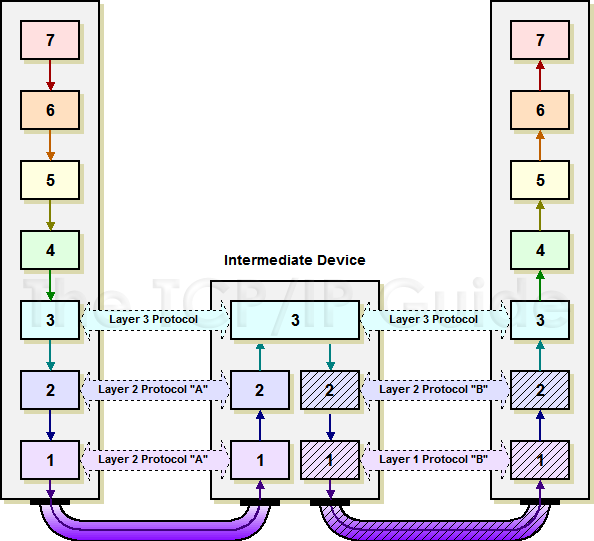 NOTE: It's fair to mention that other things can interfere with the typical behavior (firewalls, NAT/PAT, ACL's, etc.) But it's best to have a very solid understanding of where all the encapsulation and de-encapsulation is taking place to understand how those affect the network and the traffic.

The Layers can happen in multiple devices, at multiple levels. When it hits my firewall, for example, the firewall peels back all the way to Layer 4 to check the TCP ports against my ACLs. It then re-wraps the data down to Layer 1--and if I'm doing NAT/PAT, it even (gasp) modifies that data!!--and hammers that onto the wire to the next device, which may dig deeper, or not as deep.

The OSI Model layers are more for thinking about things. It may--or may not--necessarily be happening precisely. Some things happen on multiple layers. One kind of "thinking about things" is programming. In vague, general terms, each layer is handled independently and assumes that the layers below/above it are functioning properly.

But as useful as it is for thinking about things, as much as it's used to program and process data, don't forget that in the end, in the words of Monty Python, "It's only a model."

Not the answer you're looking for? Browse other questions tagged osi or ask your own question.

1
How to explain the data flow of OSI model layers in a single picture
1
What is the physical representation of the OSI model?
1
Question about the 7 layers of OSI Model
1
Where does the code for the OSI layer protocols exist?

38
OSI Model and Networking Protocols Relationship
3
Where do the layers of the OSI Model operate in the operating system?
1
Does every application use the layers of the OSI model?
1
OSI model peer communication
0
Is it possible to have a local area network with only layer 1 and not layer 2 of the OSI model?
0
OSI model: the session initializes the communication?
0
Why in the TCP/IP model the link & physical are one?
0
What is responsibility of different layers of OSI model and intermediate devices between sender and receiver when data packets are lost/corrupted?