I have two L2L VPNs connected to a central ASA. I want these VPNs to communicate with each other but there are some caveats i'm having issues with.

On the first VPN (VPN1), everything is working fine. This is a more "traditional" IPSEC VPN, with limited to no NAT. That is to say that everything communicates via real addresses and traffic is routed through the use of an interesting ACL. There are no problems here: HQ and VPN traffic move just fine to one another.

On the second VPN (VPN2), a newly provisioned link, I want clients on VPN2 to communicate with a server at VPN1. The challenge is that VPN2 uses IP space that overlaps with VPN1 and with the headquarters ASA that both of these VPNs connect to.

I want VPN2's traffic, all of it, to PAT to a single address. Headquarters should see this traffic as the PAT'd address and should never see the real addresses. In an ideal world, this PAT would be handled on VPN2 so that HQ doesn't need to know any details or manage any specifics. From HQ's perspective, and from VPN1's perspective, all traffic is simply sourced from an address that is in the interesting traffic ACL.

Additionally, once the PAT traffic hits HQ, another NAT needs to take place. This time, HQ needs to NAT, on a 1:1 basis, traffic going to servers in a "hidden" subnet. HQ exposes a subnet (which is in the interesting traffic ACL of VPN2's ASA, and thus encrypted via ipsec). The logical way you would do this on today's ASA code is

I can't seem to get a configuration with the following characteristics to work:

I'd like to figure out what the right configuration model is to achieve this. Ideally, my requirements would be that VPN2 only shows up to me as a PAT (and it should be handled on their end), and HQ ASA handles the NAT for traffic from VPN2 to VPN1.

This is a really old post, and that's a complex set of requirements. But I'll try to answer this question for anyone else who may be looking to do a similar thing. 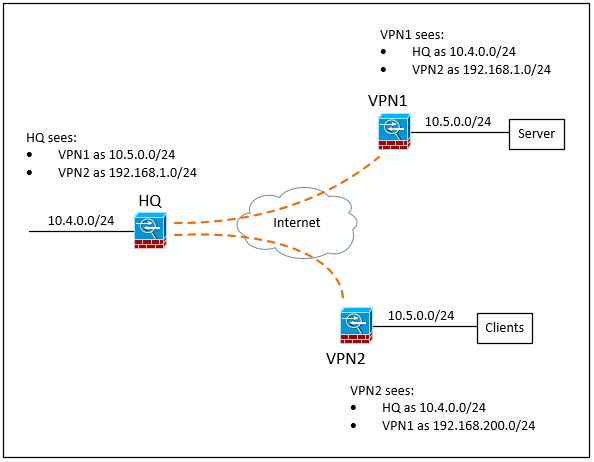 Hope this helps somebody.

Not the answer you're looking for? Browse other questions tagged cisco-asa firewall or ask your own question.

3
NAT and ACL order - Cisco ASA, Palo Alto, Checkpoint
3
ASA 5525-X PAT only for one IP subnet
3
Migrating from Cisco ASA 5508 to Cisco Meraki Firewall Appliance at small office
2
Can Cisco ASA be a firewall for another public IP?
4
Error Message %ASA-3-210007
0
Pass traffic to ASA from Spokes via Hub