I have two routers, AS50 and AS100, both are under my control. Since they are using different ASN, they should be eBGP routers. These two routers are connected by internet VPN and lease line, which means dual path between these two routers.

Lease line will take higher preference on packet routing while internet VPN will act as backup.

Most of your confusion seems to be related to your other duplicate question, which is the same as 3. above...:

I'm sorry, but you are mistaken; prepending your ASN out adjusts traffic inbound to your ASN.

Does prepend work with route-map in at all to adjust inbound traffic?

Yes, it does, but prepending inbound bgp routes influences outbound traffic flow from your BGP router. This is an example prepend in BGP policy to prepend 5 more of the last-as in the received AS path for an eBGP neighbor...

NOTE: Prepending is deceptive; it might seem like nobody should select a path if you have prepended a lot of ASNs to your announcements, but even if you did that's no guarantee that downstream routers won't send traffic to you over that prepended path. The reality is that internet routing is still a per-hop / per-ASN decision, and you're still somewhat at the mercy of others. See below for an example.

Strictly speaking, you loose complete control of inbound routing paths when you announce your prefix to multiple providers because there are independent routing decisions made downstream for return traffic to you. Furthermore, your announcements could even be modified by downstream providers after you send them.

This is one example of what can happen. Continuing with the example configuration shown above... 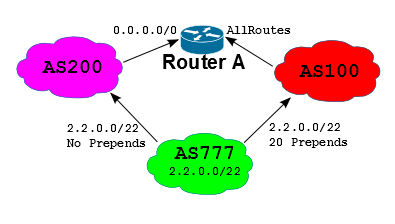 The problem is that you only have complete control of your outbound routing decisions. You don't get complete control inbound... so let's suppose Router A's administrator doesn't know your link to AS100 is bad. They are dual-homed to AS200 and AS100, but AS100 offers much cheaper transit, per-Mbps; therefore Router A's engineer takes full routes from AS100 and only uses AS200 as a backup (taking only a default from them).

AS 100's engineering team decides to set a high local-pref for 2.2.2.0/22 announcements from you. As such , the combination of full routes at router A and AS 100’s local pref means that you’ve lost control for ingress traffic through AS 100 to AS 777.

Since both routers are under your control, you can set the MED attribute with the command

instead of using as-path length.

Not the answer you're looking for? Browse other questions tagged cisco routing ipv4 bgp or ask your own question.