The SMB organization I work for is migrating to HP/3COM Comware L3 switches and we will be implementing the standard Core>Distribution>Access design.

Please refer to this diagram for clarification: 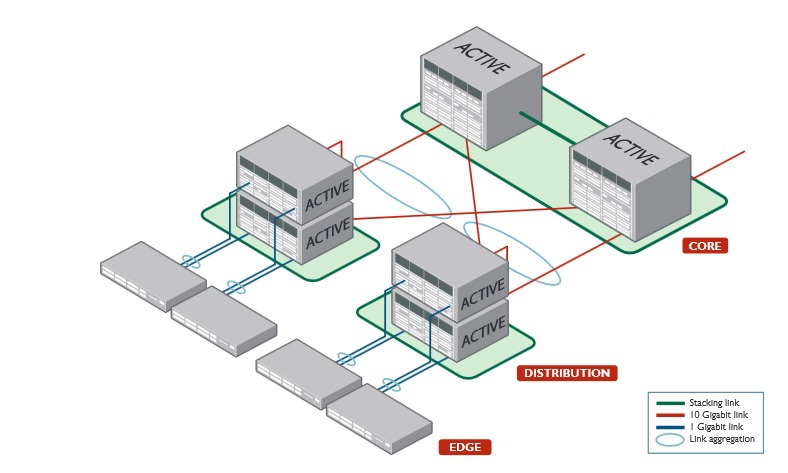 In the Cisco world, it's always been highly recommended to have layer 3 between distribution and core using a routing protocol. Mainly due to avoiding blocked ports due to STP, faster convergence/fail over times, L2 loop prevention etc. Also allowing inter-vlan traffic without sending traffic up to the core.

My question is: Is the practice of implementing a 'layer 3 distribution to core' applicable today in the HP world when it's possible to have a highly redundant layer 2 to the core without STP, using IRF?
I’ve researched a bit but can’t find clear guidance when it comes to specifically a core using IRF or equivalent.

I’m torn between the ease of L2 and the wildly recommended L3 solution. Thanks very much for your help.

Further Information: In the layer 2 example, I would be tagging traffic all the way to routed interfaces on the core using inter-vlan routing. This would allow me to do most of my configuration on the core without having to replicate it to the distribution - resulting in simplicity and less human error (Could be useful for eg guest VRF or security policies). The HP switch specs are well beyond our requirements therefore larger broadcast traffic isn’t an issue.

– Faster convergence around a link or node failure.

– Increased scalability because neighbor relationships and meshing are reduced.

These are all great reasons, but you won’t stand to benefit from any of them, as your setup doesn’t allow for it. If a packet arrives at your distribution node, it’s only going to have one node that it can go to next; your core which is using IRF. There isn’t a routing protocol that is going to be intelligent enough to determine that you have another (perhaps lower speed) connection combining your 2 cores. That additional hop is transparent and would require some manual intervention (somehow).

Personally, I don’t think it’s a good idea for you to virtualize your cores. Path determination is impossible, independent device operation is severed, and you completely eliminate the possibility of intelligent routing. All of those are critical to a well oiled network.

Though, you may have additional business requirements that dictate this design but aren't outlined above.

In the Cisco world, it's always been highly recommended to have layer 3 between distribution and core using a routing protocol.

This isn’t just the Cisco world, this is the Networking world overall. Network engineers work to eliminate STP in as many cases as possible because they know of the limitations it drags along with it. Routing to the access layer is recommended nowadays:

There used to be an idiom: “Switch where you can, Route where you must”. In recent times, that has been completely flipped on it’s head:

Tons of enterprise switches support some level of routing now. We can’t stand behind ‘my device doesn’t support that’ because that’s not the case, anymore.

Is the practice of implementing a 'layer 3 distribution to core' applicable today in the HP world when it's possible to have a highly redundant layer 2 to the core without STP, using IRF?

Yes, it absolutely is. HP’s Intelligent Redundant Framework is just another system virtualization technology like Cisco’s StackWise and Juniper’s Virtual Chassis, just painted a different color and tagged with ‘the most disruptive technology in ages’. Every vendor will tout how much better theirs is than the competitor, but it’s not a game changer or anything to write home about.

Layer 3 can be used in a "Broadcast" or "Point to Point" type of construct to stitch together today's networks. Your fault isolation can be extremely good, down to a single device, a single P2P OSPF or BGP connection. Prefix list filtering, ACL's and specific routing & PBR can be used here.

Layer 2 spans multiple VLAN's across multiple switches. This is a legacy design. If you can push layer 3 down to the access switch / ToR, you're saving yourself headaches and future-proofing your designs.

I personally will go for layer 3 to access layer if possible...

Run layer3 at the higher layer (static or dynamic routing). You will get the flexibility to apply traffic control and QoS besides the benefits others mentioned.

Not the answer you're looking for? Browse other questions tagged design layer2 hp layer3 3-com or ask your own question.

4
HP Procurve 5406 Traffic Control Via VLANs and STP
4
Network hierarchy model - Situation to implement core layer
4
Is this the core layer?
1
HP 1910 disable layer 3 mode
8
What is the difference between layer-2 and layer-3 broadcasts? Please explain with an example
1
HP IRF and number of access switches
3
L3 Core to Firewall question
0
Layer 2 and Layer 3 traffic with one cable
0
Routing switches at core and distribution