The physical layer must generate the electrical, optical, or wireless signals that represent the "1" and "0" on the media. The method of representing the bits is called the signaling method.

Encoding or line encoding is a method of converting a stream of data bits into a predefined "code”. Codes are groupings of bits used to provide a predictable pattern that can be recognized by both the sender and the received. In the case of networking, encoding is a pattern of voltage or current used to represent bits; the 0s and 1s.

I don't understand the difference between these two. When I describe line encoding in my own words, I would say encoding means putting the 1's and 0's in a certain pattern, so both nodes can understand that pattern. The encoding-protocol used defines that pattern. Is this correct?

I do not understand the definition of signaling... These two terms are explained on the same page in my cisco book, but to me signaling seems very similar to encoding. I can't differentiate the two.

Signaling is the method by which you define what a one or zero is. Encoding is how you use the 1s and 0s to represent information.

Just posting it as an answer since Ron didn't.

Signaling defines method (voltage, current, RF, light) will be used to represent a 1 or 0. For example; if I say a 1 is 5 volts and a 0 is 0 volts, this is signaling.

Think of Morse Code. The signal is the sound, pulse, or light. The message is encoded using the "dits" and "dahs", for example. 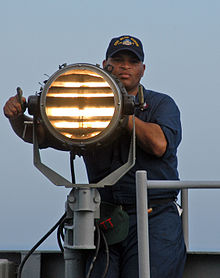 i Think both definitions are very confusing. the author needs to define them again. i find it useful that enconding is choosing the method of coding the bits with volt, RF, or light. whereas signaling is defining what a zero and one represent. For example, the manchester code is a good example of picking a volt graph to represent a group of one and zeroes whereas the low to high voltage and high to low voltage representing the zero and the one is an example of signaling. if im wrong correct me. this comes from the cisco book.

Encoding and signalling have all sorts of meanings. When referring to a baseband line code, they are basically interchangeable. The data stream is encoded into digital levels in a digital waveform, or rather – symbols, with a chunk of bits selecting one of the available discrete symbols of the modulation scheme, which in the case of a baseband line code can only be a baseband real ASK symbol. In this case the data is encoded using that signalling method. In another scenario, they might be different – you could use bipolar encoding but this time the signalling has more details, it might be using a certain carrier sinusoid, or it might be using a spread spectrum, or you could get manchester encoding, but the signalling could use QPSK, so you get a real and an imaginary line code, which can't be sent baseband.

Encoding can also refer to any coding such as FEC or interleaving that happens on the original data stream to improve the BER before you get the final data stream which is then encoded in a line code.

I would also say that encoding could be as simple as converting a bit stream to another bit stream that represents the amplitudes of the actual physical line code, so if 01 represented 1, 1 would be converted to 01, whereas the signalling details the baud rate that gets used, hence then the bandwidth of the signal. It also includes the power amplitude of the signal (the actual amount of power radiated from the antenna for the symbol representing 1 for instance), and may contain further details such as the carrier frequency or even the frequency response of the channel and the channel gain

Signaling includes the media-specific parameters: signal levels, wavelengths - like MLT-3, PAM-5, 850 vs 1300 vs 1550 nm, and imho even single-mode vs multi-mode fiber.

Not the answer you're looking for? Browse other questions tagged layer1 terminology or ask your own question.

5
Importance of encoding data to signal
1
How first byte is determined when data is encoded via manchester encoding
1
Why is Non-Return-to-Zero encoding called this way?
2
Manchester encoding: 'signal' and 'bit sent'