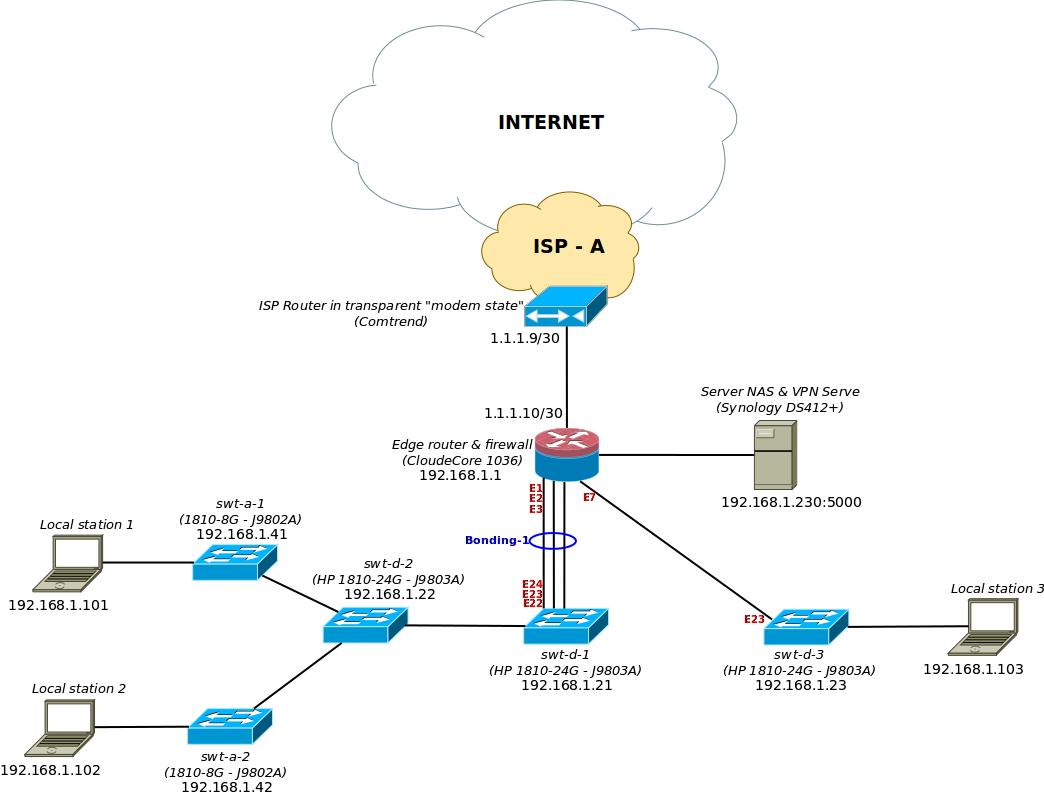 At above picture You can see part of my network scheme. Main router based on Mikrotik CloudCore1036 within one bridge and HP switches 1810-24G and 1810-8G - all default configured within default VLAN. All CC1036 interfaces were arp-proxy and arp-enabled mode.

At first look everything was fine - all hosts had access to the Internet and between them along the LAN.

First symptom was loosing connectivity to the NAS server from whole LAN site and from Internet using VPN.

Also ARP tables at hosts at Local station 3 wasn't complete !!! They didn't know about MAC addresses of their closest neighbors !!!

I suspected that there is problem with swt-d-3.

When I disconnected at swt-d-3 switch link E23 to the CC1036 trying to replace that switch - monitoring server showed that problem disappear immediately.

It was strange because problem was isolated to the Local station 3 LAN part. Theoretically frames and packets shouldn't leave swt-d-3 switch because problematic traffic was limited to hosts connected to this switch ports.

When I reconfigured CC1036 and changed bonding protocol from balanced-rr to the 802.3ad between CC1036 and swt-d-1 the entire network began working well !!! All hosts began see each other, connectivity problems with Nas server disappeared, and all ARP tables have become complete.

Why configuration at layer 2 at layer 3 device at different site of LAN caused problem at another part of the network ?!

First, to be clear, since you mentioned that you are bridging the interfaces on the Cloud Core, this is part of the same L2 LAN, not a "different site."

Second, misconfiguring a network device can create all sorts of unintended problems. Part of being a good network troubleshooter is being able to separate the actual problem from the symptoms.

What kind of mechanism at CC1036 has been activated that cause gaps in the ARP tables across the entire network many devices further ?!

In your fix, you only mention changing the Cloud Core from balance-rr to 802.3ad. Did you change anything on swt-d-1? If so, what?

My guess is that you had a problem with STP, which can happen when you don't configure your link aggregations properly on both sides. Problems I have seen when this happen are L2 loops or situations where one device is sending traffic to the second while the second device has the port in a STP blocking state.

With my knowledges and my Mikrotik adventures I advice to you :

Not the answer you're looking for? Browse other questions tagged arp hp etherchannel or ask your own question.

1
Guidelines for network design of bladecenter
1
Link Aggregation and Balancing Methods
1
ARP spoofing in different VLAN
1
Ping a host that is in the same LAN
6
What are the reasons for seeing an incomplete ARP?
2
How does ARP work on multilayer (Cisco) switches
0
ARP behaviors between hosts connected via switches
0
Prevent Users from Setting Specific Static IP