How does Ethernet 1000BASE-T recover framing if PAM5 is only used for error correction?

The descriptions I have found says that 4 of the states in PAM5 is used to transfer the 2 bits for effectively 125 MHz signalling, and the 5th state in PAM5 is used for Forward Error Correction (FEC), but there is no mentioning of frame recovery, like for example made with the 4B5B encoding in 100BASE-TX.

So, if the 5th state in PAM5 of 1000BASE-T is only used for FEC, then how is framing recovered for signalling on the Gigabit Media-Independent Interface (GMII) from the PHY?

Based on this presentation some of those PAM5 codes (2 byte "SSD" and respectively 4 byte combo "csreset" and "ESD") mark the start and respectively end of frame, similar to how J/K and T/R do the same for 100BASE-TX. 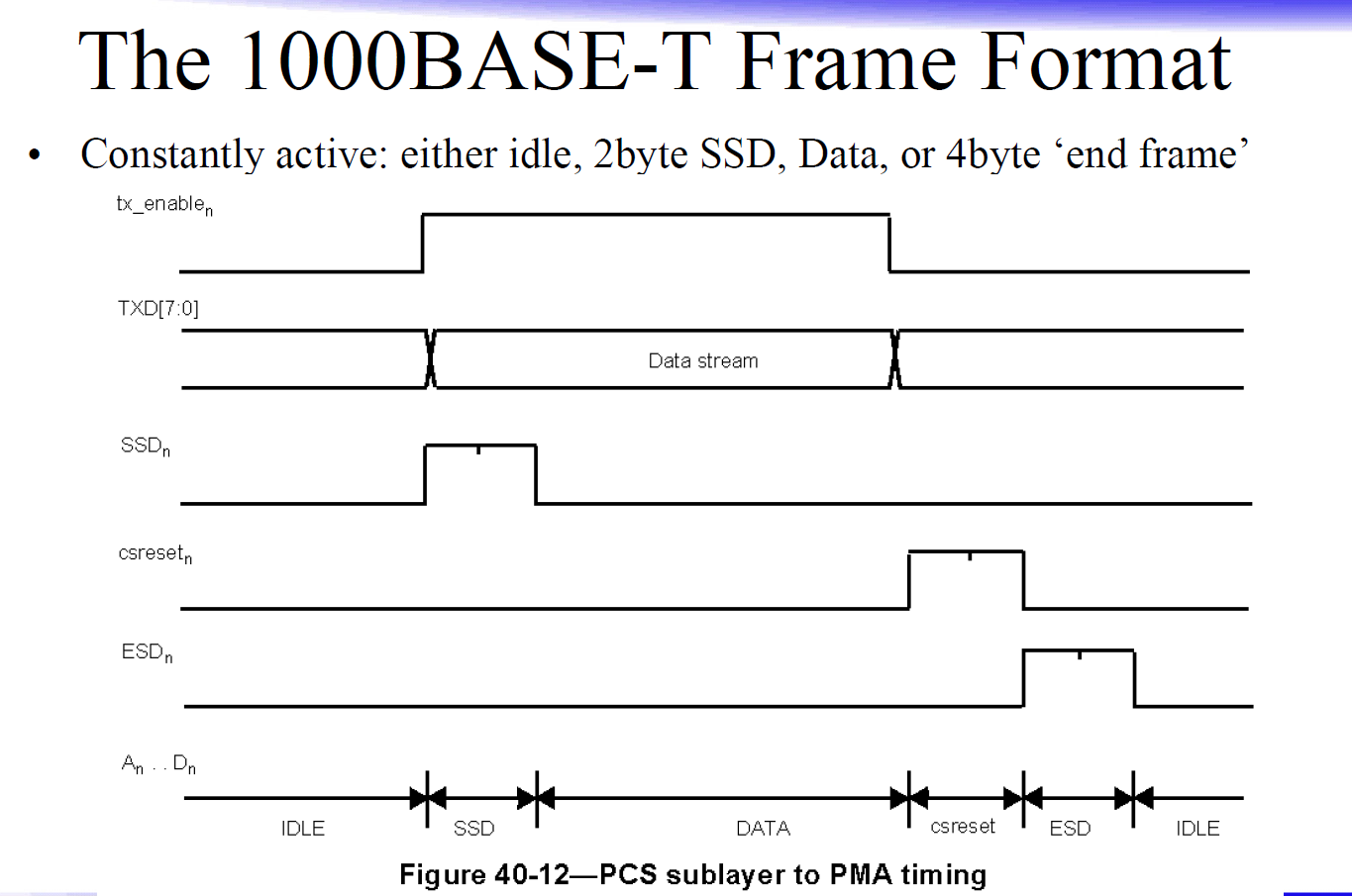 The 802.3-2005 standard explains how these are coded relative to normal data:

The actual codes are publicly available [for free] as ASCII table 40-1 and table 40-2. The codes are given per byte there, e.g. to send SSD, you send SSD1 and SSD2 in this order.

Not the answer you're looking for? Browse other questions tagged ethernet layer1 or ask your own question.

4
How do the different types of materials used in Ethernet cables affect reliability?
7
How does Ethernet detect a collision in the CSMA/CD method?
4
Why does 10BASE-T and 1000BASE-TX Ethernet have two Tx signals?
4
How does an Ethernet hub work internally?
2
MTU does not tally with Ethertype for Ethernet II frame
9
What is the purpose of an Ethernet magnetic transformer, and how are they used?
13
What does the naming convention for Ethernet standards mean: 1000BASE-T, BASE-TX, BASE-SX, etc.? What is the meaning of the components of the name?
1
Can ethernet port be used for getting a signal from passive circuit
15
How exactly does an Ethernet collision happen in the cable, since nodes use different circuits for Tx and Rx?
1
How does the Ethernet handles start of frame collision?