Multi-Node VSS core, how to configure? 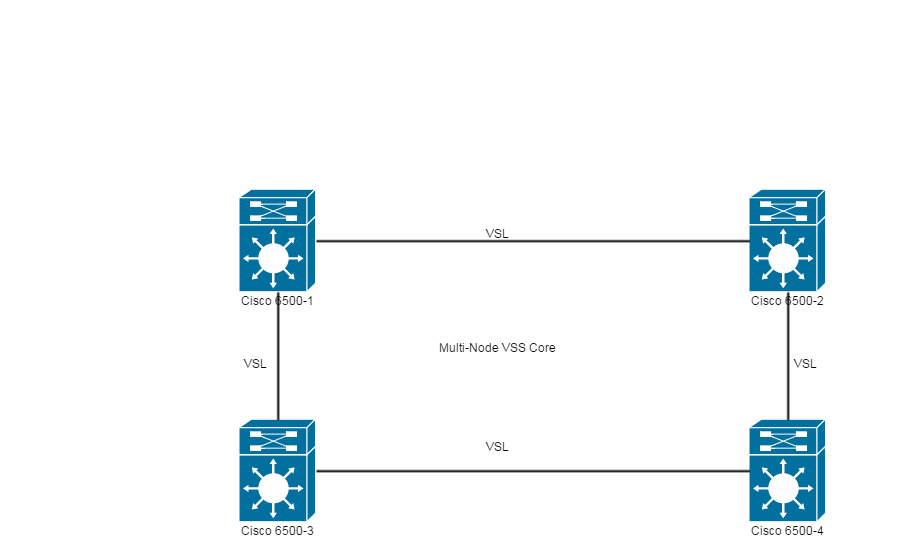 In this diagram we have 4 Cisco 6500 switch, which are connected via standard 10 GB VSL links. The questions are:

I'm so sorry, my mind is so puzzled that I asked all these questions in a row. Actually, it's my new task in hand and I have never ever done such thing before. Please share any kinda link, web page, or reference which you think may be helpful.

VSS only allows you to aggregate two physical chassis at a time. Remember there are really only two main drivers to even using VSS (and many arguments against it depending on who you ask):

In a "box" design like this, comprising four switches, you would use VSS on each pair separately. Then use the normal network protocols (Spanning Tree, routing, etc) to manage traffic to/through the other pair.

Based on your questions, I thought it might be good to clarify a few basic components of VSS.

Secondly, the VSL interfaces are only used among a single pair of switches. To cable two pairs of VSS Switches together (for a design like you reference), you would simply use existing ethernet ports and configure 802.1Q trunks or routed interfaces as needed in your design. Each of the two VSS pairs would appear as independent switches to the other. No multi-chassis Etherchannel or single point of management functionality is possible between the two VSS pairs, they are for all intents and purposes two separate switches.

See this very helpful VSS Q/A document that Cisco has put together, or the Cisco Solution Overview document for VSS for more information.

That design and equipment choice is sub-optimal. Cisco Nexus and/or 4500x switches are better value for 10G aggregation. Access cross-chassis etherchannel to core is what you should do.

Not the answer you're looking for? Browse other questions tagged cisco vss or ask your own question.

14
Why we get high fluctuation on bandwidth measurement Cacti graph?
12
NX-OS peer-switch issues with 6500 VSS
8
Switch replacement procedure 3560G to 3750X
11
Does Cisco 6500 VSS improve or hurt MTBF?
4
6807XL CPU process stuck at 25 / 30 %
3
link aggregation between switch and router
4
2-stacked switches with 2 uplinks to each ASA
3
How switch divert traffic to standby ASA when link to active ASA is down?
4
NTP architecture questions
2
Building Spanning-tree link