Why is eBGP receiving updates with `Origin IGP`?

Why is eBGP receiving updates with Origin IGP?

Is this normal or just an OS bug? 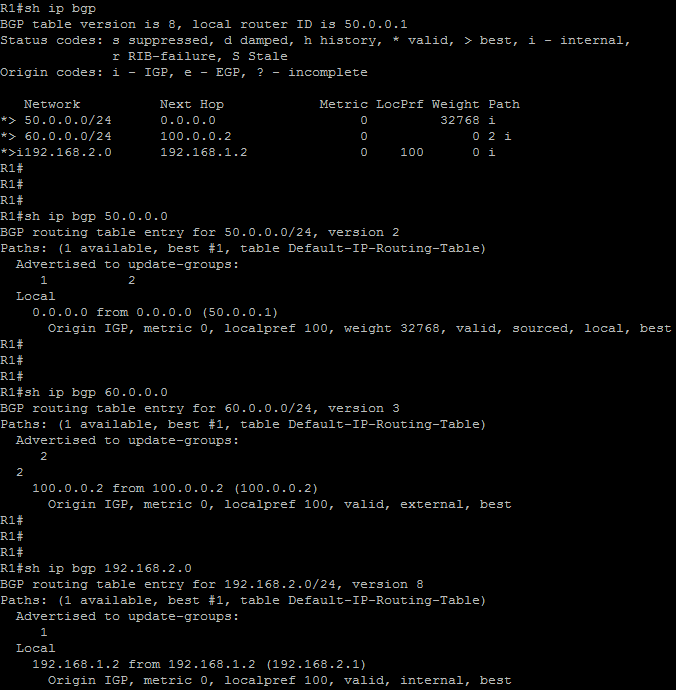 Routes show up as Origin IGP for one of these reasons:

Why does the BGP Origin code matter?

So the question might be asked, "who cares what the BGP Origin code is?"; the Origin code matters in certain cases. If you look at the BGP Path Selection algorithm, origin code is considered at step 6 of the 10-step algorithm; Origin IGP is considered the lowest if the weight, local-preference, and AS-path length are all the same.

Just for grins, I'm including the BGP path selection algorithm below... notice that the Origin code is at step 6, but there are very relevant decision points below.

Not the answer you're looking for? Browse other questions tagged cisco routing router bgp or ask your own question.

9
TCP Client / Server in Cisco EEM 3.0
13
How do I read optical transmit power via SNMP on Cisco ASR9k?
9
Why does "show adjacency" take so long to run?
4
cisco 877 router QoS on traffic with a specific destination
6
On the Cisco AIR models, what is the definition of radio reset code 71?
0
IOS Configure Terminal equiv in C3700 Software
1
How can I bridge multiple interfaces to a single one a Cisco ISR C891F but making each one able to communicate only to the destination interface?
3
No passive-interface error
1
BGP Best Path Selection Algorithm