Ask Question
Asked 5 years, 4 months ago
Active 1 year, 9 months ago
Viewed 8k times
2
This question already has answers here:
Why and how are Ethernet Vlans tagged? (4 answers)
Closed 5 years ago.

Since I'm a noob, I'm unable to post a follow up question on the following question... Why and how are Ethernet Vlans tagged? 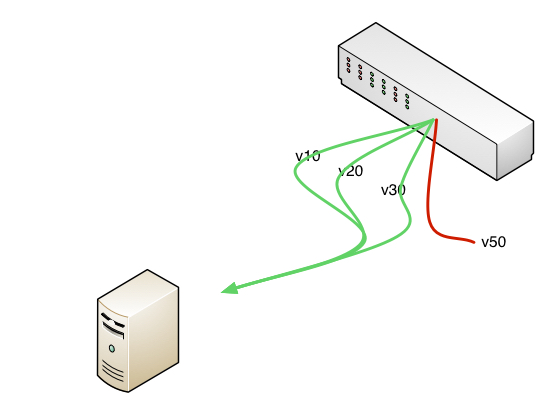 In my image, I believe I have correctly depicted how tagged networking works, going from the switch to a device. If v10, v20, and v30 are tagged, then that traffic is allowed to pass through to the client device. Since, v50 isn't tagged on this port, it's traffic would not be allowed to pass. The client device would, then, determine how to handle the traffic of the different vlans (such as an Access Point that has multiple SSID's for multiple vlans or a Host running virtual computers and the guest computers are on different vlans).

Since many devices (such as our home computers) do not (to the best of my limited knowledge) have the ability to apply the 802.1Q tagged header to their traffic (basically setting the computer's network card to where it sends it's traffic using a tagged network, such as the v10, v20, or v30), the traffic coming from the computer would be rejected. 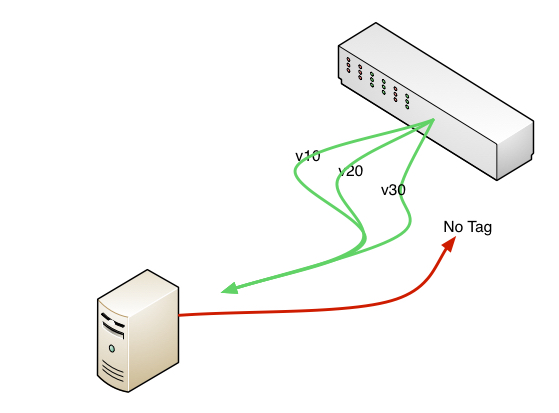 In this instance, an untagged network is required.

1.A That the vlan be untagged at the switch (such as v20)

1.B The device is able to tag it's traffic (such as a VoIP Phone) 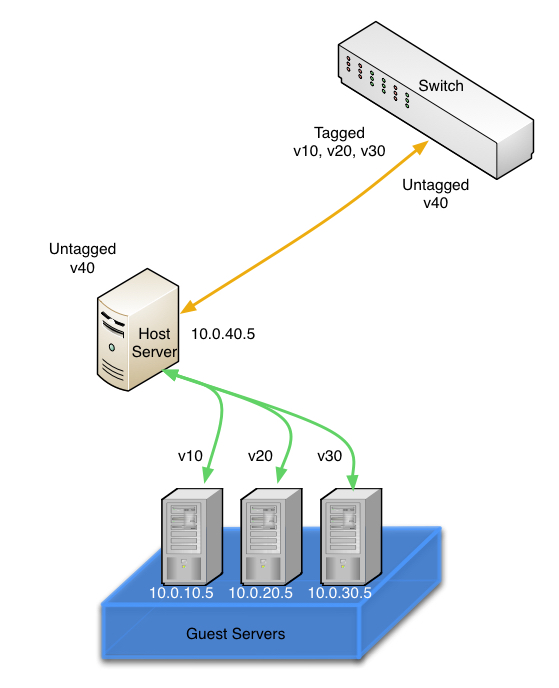 The guest networks then send their tagged traffic back through to the host server, who then relay's their traffic to the switch.

A. Send it via the untagged network and the switch routes the tagged traffic accordingly?

Thank you for your help with this!

UPDATE: The system is requesting that I update this question addressing why this is different than the Why and how are Ethernet Vlans tagged?. I would have added a comment to that question, but being a noob I don't have enough reputation points to post on it. While it does address my questions to some degree, part of this was trying to clarify my understanding and to ask a follow up question.

Tags are only attached to frames on trunk ports. Access ports, while members of a VLAN, do not tag frames as they exit the port.

Typically, end devices are attached to access ports, so they do not receive frames with tags. There are exceptions to this since some servers can deal with tags and are attached via a trunk port.

No, that does not accurately reflect how tagged and untagged traffic works.

First off, 802.1q VLAN tagging is done on layer 2 in Ethernet frames, so IP addresses have no bearing on the behavior of tagged or untagged frames. Second, tagging is not a system for allowing or denying traffic to or from specific VLANs. A frame should not generally be rejected simply because it has or does not have a tag.

VLAN tags are only a way for frame to specify what VLAN it is intended for. That's pretty much it (there are other things but let's get the basics down for now).

For an interface that does not process VLAN tags (or has the processing of tags disabled), all frames coming into that interface are considered to be on the same VLAN. For devices that do not understand VLANs, frames coming into any interfaces are just on the one network (VLAN) that the device sees.

For interfaces that do process VLAN tags, the tag tells the interface what VLAN the frame is for. Most of the time, when an interface is configured to process VLAN tags, one of the VLANs available on that interface is configured to be the destination for any frames that do not have a tag. That VLAN is often called the "untagged VLAN", "default VLAN", or "native VLAN". Untagged packets arriving at an interface with a default VLAN configured will be accepted and passed on to that VLAN. Not having a tag does not necessarily result in the frame being rejected or dropped. Sometimes for security purposes, there will be no default VLAN for an interface, or untagged packets will be explicitly dropped.

Also, VLANs are not entirely tagged or untagged. Interfaces are configured to use tags on all or all but one of the VLANs available on that interface, but which VLAN frames are tagged can vary from interface to interface.

Hopefully that clears it up a little bit.

When an Ethernet frame traverses a trunk link, a special VLAN tag is added to the frame and sent across the trunk link.

As it arrives at the end of the trunk link the tag is removed and the frame is sent to the correct access link port according to the switch's table, so that the receiving end is unaware of any VLAN information.

Not the answer you're looking for? Browse other questions tagged switch vlan trunk or ask your own question.

82
Why and how are Ethernet Vlans tagged?