"...understand that routers, which work at Network layer, don't care about where a particular house is located. They're only concerned about where networks are located and the best way to reach them." 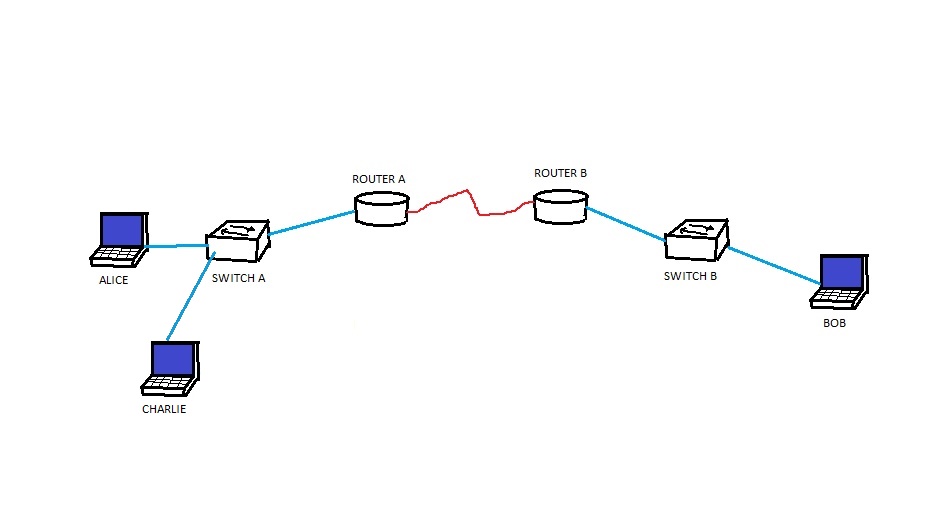 Using the diagram above as reference, I have some questions in mind:

I hope my questions make sense. I'm trying to get my fundamental right before going to advance topic. Sorry if my English is bad.

Let's make one assumption at this point to keep things simple - this is all Ethernet and IP.

Having said that there are two steps that I would add to your bridging summation that might clear up your understanding of routing (question 2) a little:

a) which interface to transmit the data out

b) if the destination is directly reachable or is remote (beyond a router).

So when Alice is sending data to Charlie she does a route lookup - it is determined that his machine is directly accessible on the LAN. She then ARPs for his MAC address. Once the route has been determined and the MAC address has been acquired the network stack can then assemble the packet for transmission. This particular conversation as you mentioned only traverses switch A as it inspects the destination MAC.

Now that we have fleshed out question one a little better let's apply some of these concepts to question 2.

When Alice desires to send data to Bob the first step is a route lookup. It is determined that Bob is not on the LAN. Thus the route to Bob is the default route (assuming Router A is configured as such). (As your book points out Router A - and by extension Alice - don't know where Bob is. They only know the general direction - or "route".) So Alice ARPs for Router A. Then assembles the packet with destination IP address(network layer) of Bob and MAC address(datalink layer) of Router A. Upon receiving this packet Router A 1)strips off the MAC address(datalink layer) of Alice 2)does a route lookup 3)ARPs for router B 4)then reassembles the packet with MAC address of Router B. Router B repeats these steps ARPing for Bob and forwards the packet.

So the network layer is assembled at the start - source Alice and destination Bob - and never changes. The datalink layer on the other hand is deleted and reassembled each and every leg of the trip.

So then while listening on the wire with tcpdump (using my local MAC as src and dst (to capture both the outgoing frame and incoming frame)), I ping 10.0.0.7 from my local machine in a different terminal window. The first ping sometimes fails as it has to do the ARP lookup:

In the tcpdump window, you can see what happens after I started the ping:

After the lookup and reply, my local ARP table is updated. This entry will stay present and won't need to do another lookup for that IP's MAC until the ARP cache timeout occurs for that IP (default is 60 seconds on Ubuntu):

Not the answer you're looking for? Browse other questions tagged switch router ip osi ip-address or ask your own question.

9
How are MAC/IP addresses used in routing
7
Why is the NDP Neighbor Solicitation message sent to the solicited-node address?
4
Communication between a Switch and Router?
1
Does every application use the layers of the OSI model?
3
Encapsulation and decapsulation basics for OSI layer
4
Mac address and IP address in physical addressing in Data-Link layer
4
How does Ethernet Switch ensures the validity of the MAC address table?