I have a question regarding a hierarchical design of a campus network.

Take a look at this image: 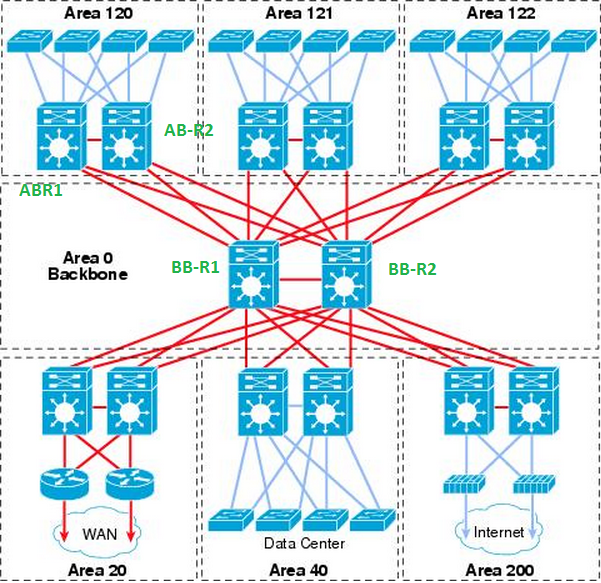 If I understand correctly the links between each Area Border Router and BBone router are point-to-point Layer 3 connections. With every point-to-point link in it's own subnet (probably a /30).

But I was wondering if, for example, links going from ABR-1 & ABR-2 to BB-R1 go to a switch, would this break the "L3 down to the access level" design idea? If so, why's that?

Switch now drawn- The green lines represent one subnet, and the red one a different subnet.

The idea behind "L3 to the access layer" is to avoid blocked links that would occur when STP blocks L2 loops, and allow multiple paths for increased bandwidth.

In your second drawing (assuming the link between the two ABRs in area 120 is not in the same VLAN), you don't have any L2 loops, so you don't have that problem.

So there's no significant disadvantage in having the links in the same VLAN. Technically you do have a designated router to deal with, but that shouldn't cause you to change your design.

However, if you're using an external switch (your backbone and area 120 ABRs connect to a common switch, each with a single connection), then you lose the bandwidth (and redundancy) that you would have with a separate physical link to each router.

Not the answer you're looking for? Browse other questions tagged routing ospf or ask your own question.