Private and Public IPs in the same OSPF area

I will have a routed network with both public and private subnets routed with OSPF. There will be two core routers that both have a default route to the internet.

My question is how I make sure that no traffic with a private src-addr is routed outside my OSPF-area and also how I NAT this traffic. My idea right now is to have a specific NAT-router set up in the network and then do policy based routing on the core routers.

EDIT: We are using L3 switches of different brands. The aggregation layer is mostly HP5400 and the core layer will be Dell S6000-ON. In the diagram you can see a simplyfied picture of our network. Right now we plan to have a dedicated NAT router (probably a linux machine) which lives on both private and public adresses to which we direct traffic from the core switches with PBR 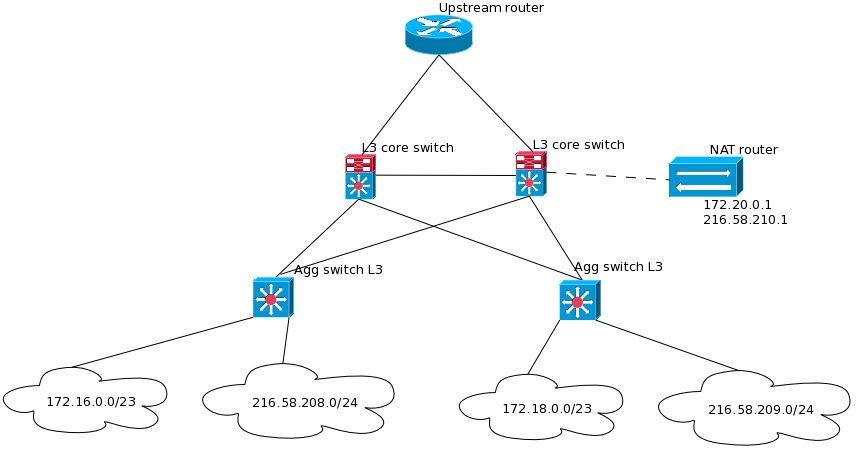 Core Switch is ON -> Open network, i would guess they run Cumulus Operating system.

Just do the Nat on the L3 core switches.

Match private IP's leaving for the Upstream router and nat them as required.

My idea right now is to have a specific NAT-router set up in the network and then do policy based routing on the core routers.

As long as you can set up a rule based on the combination of source (private) and destination (outside your network) that overrides normal routing and sends packets to the NAT box this should work fine as a means of bringing outgoing traffic to the NAT box. Incoming traffic can be brought to the NAT box by normal IP routing.

Having only a single NAT box is a calculated risk. It makes the NAT box a single point of failure but it also means that re-routes won't break established sessions.

Not the answer you're looking for? Browse other questions tagged nat ospf pbr or ask your own question.

5
What risks to continue to use a legacy public network address in specific address/port NAT on a private network
2
Designing OSPF mesh network
3
How to design a good (small) OSPF network
2
Optimizing Router Topology (Redundancy)
3
OSPF and VRRP network advertisements
1
Segregated OSPF Networks, cross same physical path, how to segregate back out at other end?
2
Multi Area OSPF and loop
3
Broken OSPF area and summarized routes