How to design a good (small) OSPF network

Ok, lets try again. It seems Im having problem asking the right questions so lets take it from the beginning. I work at a HPC center at a university. We have a number of small (<300 nodes) clusters and a few storage systems. To our site we get a statically routed /22 network.

Today we have the whole /22 in a single broadcast domain and we have decided to redesign and renumber the network for better scalability and performance. To do this we have bought two new L3 switches (Dell s6000-on) to use as our backbone. Connected to these we will have the aggregation switches of the individual clusters (which are HP 5400) and it will look something like this: 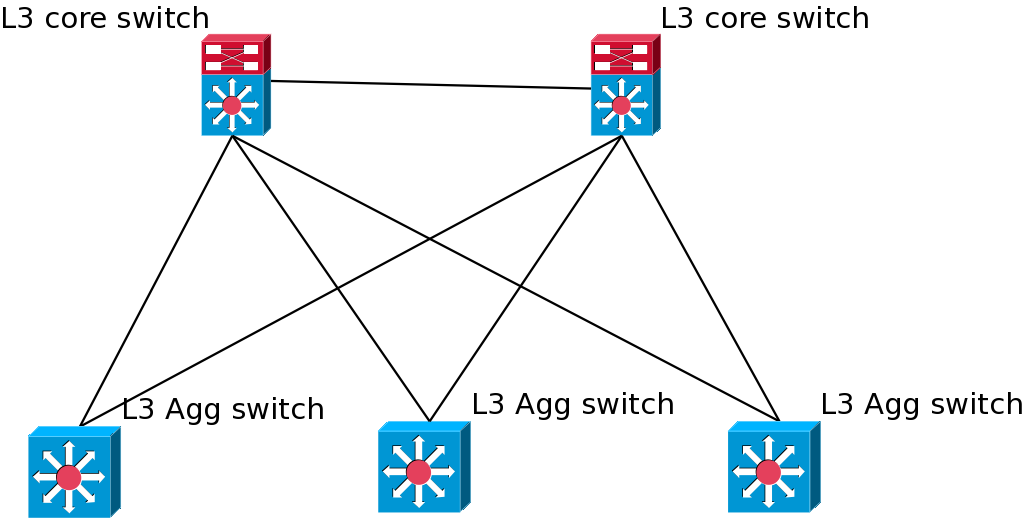 Now we want to renumber the hosts with private IP-adresses (one net per cluster) and use OSPF internally, to reach the internet we still use a default route to some central university router.

One important thing is that we still need to have some hosts with public IPs reachable from the internet (a few login nodes per cluster and some other services).

I hope this makes it more clear what Im after. Please feel free to ask for clarifications

Opt1: PBR - is messy, and hard to maintain, single nat device is single point of failure.

Opt3: get two routers/firewalls/devices that can sit between your core switch and the University network that can do the NAT for you

With the L3 recommended option, there can be smaller public IP vlan/subnets in each area.

take your public /22 and subnet with /28(64net x 14hosts) or /26(16Net x 64hosts) each, then have a vlan in each cluster for public IP machines. Also easier to filter/protect in future

But maybe the best way is to just split up the network into smaller ones and route them with OSPF as needed.

This comes from a corporate mindset where security is high on the priority list if not on top.

In corporates NO external access is allowed to internal machines, all public facing/accessible machines are in a DMZ behind FW controlling inside and outside access.

If you opt for the recommended NAT capable devices between core and rest of Campus network, you can do one-to-one nat there as required and all internal hosts can have private ip's. This also provides the possibility for better security as only specific services can be allowed inbound to hosts.

Not the answer you're looking for? Browse other questions tagged routing switch nat ospf pbr or ask your own question.