While the industry is preaching cloud in every market, and users, whether eagerly, reluctantly or unwittingly start falling in line everywhere, few seem to talk about the actual fabric of the Internet and the ever remaining complexity that undeniably sits between a customer and their mission critical cloud services.

As a result there is precious little acceptance left for connectivity issues of any kind; never mind that even a fairly large service provider in the northern outskirts of Europe, can influence the global flow of traffic between backbone providers or alleviate transatlantic congestion, to about the same extent as the nearby conference hotel, where said service provider host their customer training sessions, can keep United Airlines (Only due to a "pressing, unforeseen and otherwise undisclosed matter of passenger safety", of course. I'm sure you understand.) from cancelling the customer team's outbound flight, despite the hotel's obvious and undisputed obligation to make good the non-refundable room reservations.

In slightly simpler terms, customers increasingly expect that service providers take it upon them to ensure continuous service availability and performance, at least beyond the customer's own Internet uplink. With the competition never being further away than one click of the mouse, I feel multihoming is rapidly becoming an absolute requirement for even the smallest provider of SaaS or other Internet dependant service - Save being built on top of third party infrastructure, in which case the same requirement falls to said third party.

Unfortunately, BGP is as complex, cumbersome and scary as ever, and just does not seem like a good fit for a relatively small operation without a team of dedicated wan people. As such, I've been looking hard for a fairly robust, simple and inexpensive solution that will allow dynamic routing via two Internet Service Providers without running full BGP from your own AS.

Now, I think I finally have an idea for a usable design that will at least keep dynamic routing protocols at an arms length, and for the most part, within the respective domain of the two ISPs. 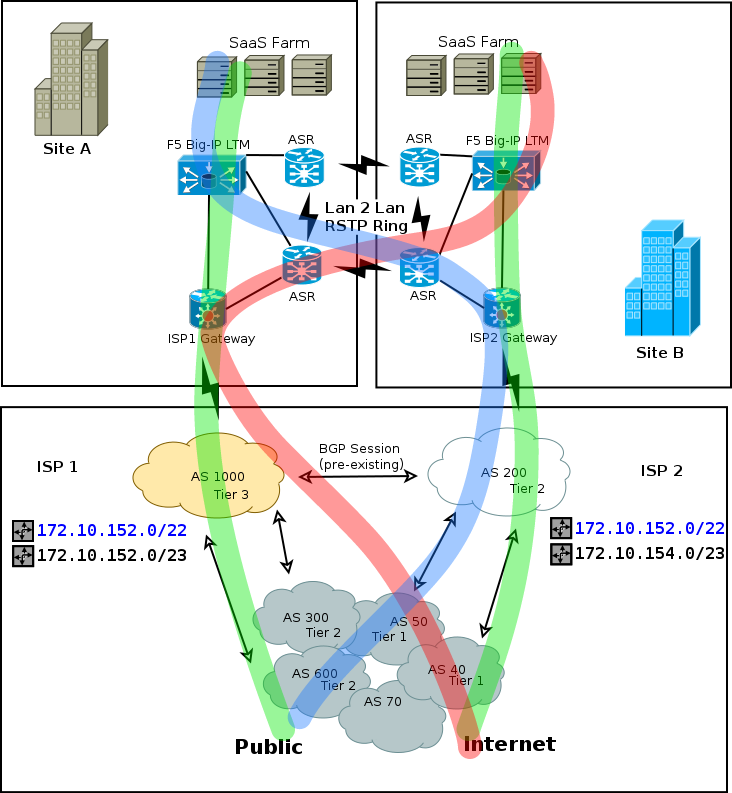 The setup makes use of a couple of notable mechanics of the BGP routing protocol and the F5 Networks BigIP appliance. First out, BGP will give heed to the most specific applicable route object. This allows both ISPs to announce the larger /22 route in addition to a more specific /23 route each, effectively cutting the block into two halfs during normal operation. As the two /23 routes combined account for the entire /22 block; as long as both ISPs are reachable, the /22 routes should be ignored, thus letting traffic flow according to the /23 routes to each of the sites along the green markers.

If, say, the link to ISP 2 goes down, AS 200 should withdraw both routes (or withdraw the small route and downgrade the other, as they can still announce on behalf of it's peer AS 1000) and traffic will start to flow to the /22 route already announced by AS 1000, with any luck, following the red marker.

Here the second of he two mentioned mechanics come into play. BigIP will by default transmit replies on the network port where a given request originated, and similarly (or so I hope) direct traffic to the originating gateway. Admittedly, I have not yet tested the part about replies being forwarded to the originating router; I suppose it could be necessary with some sort of rule to update the static gateway route entry, maybe use a simple local routing protocol or perhaps even let a VIP interface on BigIP (or if possible, on the remaining healthy ISP gateway) take over the IP address of the unhealthy ISP gateway.

In this specific layout, the fact that the two ISPs already have direct peering seem to add to the robustness of the solution. Most likely these are already announcing our routes to their respective peers on behalf of each other. This can both help reduce the immediate impact of an outage and speed up propagation of changes necessary to regain full reach-ability. If the AS 200 of ISP 2 becomes mostly unavailable, though somehow maintains connectivity to Site B as well as the BGP session to ISP 1, any traffic destined for ISP 2 that arrives at AS 1000 will simply be forwarded to AS 200 and join the path of the green marker from there.

Of course, if any of these scenarios are reversed and faults occur on the ISP 1 side instead, effects mirroring those previously outlined should present themselves, and traffic should similarly start to flow along the path of the blue marker.

As for the rest of the design, it should be possible, beneficial even, to combine this with DNS round-robin to distribute initial requests across the two sites. The setup is also meant to tolerate failure of any internal component up to and including a full site blackout.

So. Think this should work ok? Any reason it should not be done this way? Did I miss any big gotchas? See any possible improvements? Or perhaps even have an altogether better alternative? I am, as they say, all ears :)

Your thinking around the external BGP advertisements is sound, although as other have suggested, I'd highly recommend you run BGP with your providers for automated route-withdrawal on failure. Consider also the need to take a site offline for maintenance, or the need to add, move or migrate providers in the future.

Having said that, how about an alternative design:

BGP doesn't have to be a complex beast, and like any design: Good documentation should address any concerns about supportability into the future. If your management aren't supportive of building it right, then I'd advise that SaaS is not a space they should be getting into. Outsource to a player like AWS and make it Someone Else's Problem™

Regarding availability, depending on your SLA requirements, the manual failover from one ISP to another by calling the ISP and requesting the route be removed sounds like a procedure that would exceed an SLA. BGP routes do not change rapidly like internal routing protocols which makes me worried as to how long the change is going to take. Further if a ISP is having issues the reality they'll have staff available to satisfy your request in a timely manner also sounds risky to me.

Depending on SLA's I would want to have both ISP1 and ISP2 at both SiteA and SiteB. I would then want to run BGP with both ISP's. This would allow for automatic failover. However, it sounds like the option we all want to see is out of scope/budget.

I would just suggest monitoring the BGP paths with something like thousandeyes.com. You can set this up to send you email alerts should a path change, which may allow you to detect an issue before the ISP reports this to you.

The diagram you have up, looks like you have Cisco ASR which makes me think ASR1001 or something similar. If so, that's a great device to run BGP w/ your service provider. The only other device I see you could run BGP on (not sure how well it works) is the F5. This is with the mindset of keeping costs low.

The unique challenge here is a different ISP at each location and attempting a level of redundancy for inbound traffic to your SaaS.

Another idea would be to advertise only one prefix from one ISP and another prefix from another ISP. Setup the F5 with a VIP in each prefix at their respective locations prefix A at Site A with ISP1 and then prefix B at Site B with ISP2. Then use DNS to fail clients or load balance clients to your SaaS. If you set the TTL value on your DNS entries to 30 seconds, this could be near automatic. DynDNS has a load balancing option and a certain health check (is the server up, if not change DNS to the standby IP). Further you could write your own health checks to DynDNS's API and make the change that way should your script detect an event that would execute a command to change DNS. I would see making a DNS change as being much quicker versus calling your ISP to have BGP routes removed from being advertised because ISP's can be challenging to get things done and BGP does not converge fast at all.

As long as you are fully meshed and the you can backhaul your own traffic arriving at one site but destined to the other, sure, it will work. So if your peering session drops with either ISP, your more specific will be withdrawn (you HOPE!) and the traffic will flow to the aggregate route on the other ISP and you can then backhaul the traffic to the other site.

The most frustrating problem I see is network providers that advertise unreachable routes. Either through some screwup internally or whatever, they announce a route to their peers that they can not actually reach inside their network. There isn't much of a workaround for those cases.

As for the F5 handing reply traffic back via the interface on which it was received, most load balancers can do that. I don't specifically know if the F5 will but I know Citrix Netscaler will and A10 will so it seems to be a rather standard feature.

Not the answer you're looking for? Browse other questions tagged routing internet isp network-access or ask your own question.