Vlans can't see each other

OK so I hope I explain this correctly.

We have the following network setup: 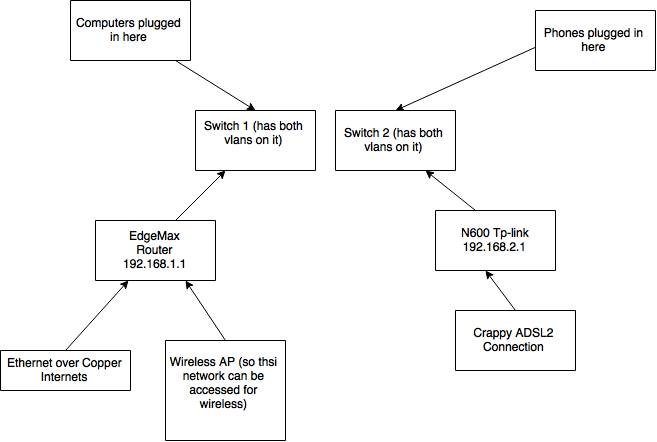 The issue is that None of the IP phones can ping the computers and vice versa. The reason the phones are on the seperate internet connection is so that if we eat all the bandwidth on the EdgeMAX which only have like 20MBPS it doesn't degrade the phones.

Is this going to be possible to have both networks even see each other? I thought it would have been fairly basic... but I feel like i'm missing some core networking knowledge for this setup... possibly in the ability for the TP links ability to see read routing packets through it's LAn ports but I'm a bit clueless.

Any suggestions as to what's doing wrong and how I could go about repairing it?

Note: switch1 and switch 2 are connected to each other (oopse on the diagram)

One way to enable traffic flow between the two VLANs would to have both the switches connect to the same router (or a layer 3 switch),because traffic between different VLANs needs to be routed.Remember that the ports between the switch and the router should be trunk ports and be enabled for both VLANs.

Question.... why do you have the AP plugged into the router? You're wasting a good FE port. Your AP's should be on the switch plugged into a separate VLAN.

Make sure your ports are trunked.

Try InterVlan Routing, that should be your fix. CISCO

4
IP Phones causing printing issue
4
Can't ping other vlan on same stack switch
1
Can't access world wide web from PC on VLANs
5
Extending VLANs to other switches
4
I have two vlans on the same router that can't ping each other
1
Making vlans talking to other vlans
2
VLANs on switch can't reach router
1
Vlan tips? New switches (hp 2920s), single subnet or multiple subnet per vlan?
2
Can VLANs with same no but on different switches communicate with each other?
1
Why can't devices belonging to different VLANs but to same network talk to each other?