How exactly does TCP react to a retransmission timeout? 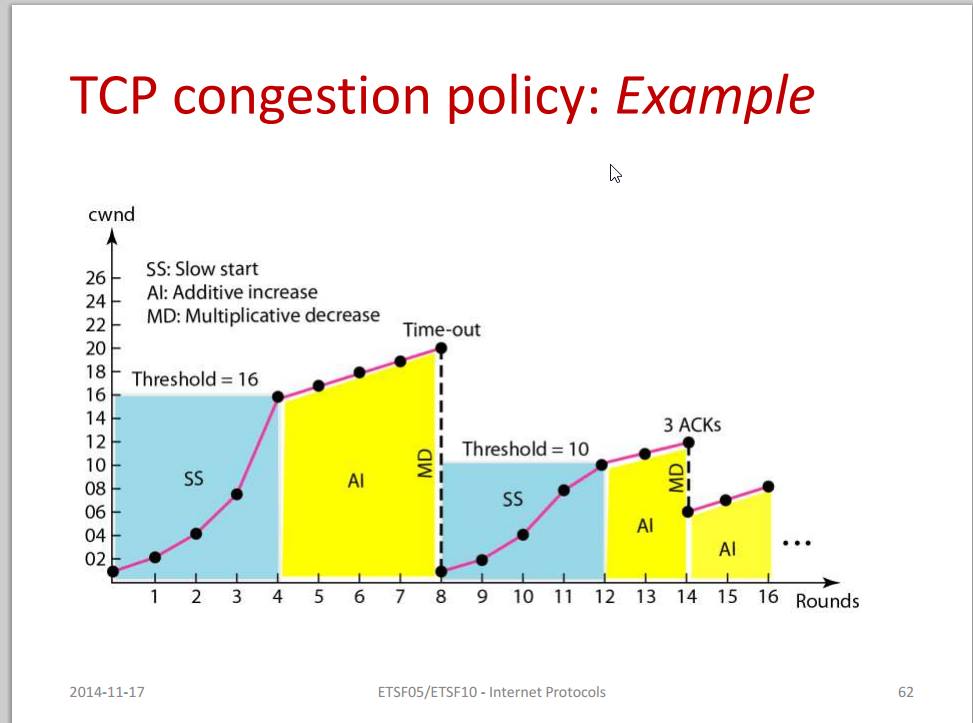 Hi! Could someone explain to me what happens at the time-out? Then the window size completely drops. I thought that at time-out the same thing as in 3 duplicate ACKs would happen; half the cwnd and go into additive increase. Is there a difference in how these indicators of congestion are handled?

What happens at the time-out is actually pretty clear from the drawing... The congestion window size drops back to its original value of 1 and slow start is run again.

The specifics of how a TCP stack will handle congestion events depend on what variant you are using. This drawing looks like an example of the TCP Reno algorithm.

When seeing 3 duplicate ACKs, TCP Reno concludes there is congestion, but the network is still working since some segments were ack-ed. In case of a time-out, the situation is worse: the network seems completely unresponsive. Actually, the fact that duplicate acks are being received before a retransmit timer expires means segments are still being received by the other side, even though some may have been lost (or re-ordered).

So, in case of the 3 duplicate acks, the congestion window is cut in half and then increased linearly. This is known as fast recovery, and its goal is actually to avoid waiting for retransmission timeouts.

Note that many more variants exist and actual implemantations can be more complex. Also observing these algorithms at work is not easy because other TCP mechanisms can interfere.

I do not know whether what you had in mind (using fast recovery in both situations) exists as a known and implemented congestion avoidance algorithm. It was probably tested and discarded when Reno was implemented. Feel free to do some digging around in the scientific papers in this area.

Not the answer you're looking for? Browse other questions tagged tcp protocol-theory layer4 transport-protocol congestion or ask your own question.

0
TCP - ack and retransmissions - Is this scenario possible?
2
Should all sent segments be requeued after a TCP retransmission timeout expires?
2
Congestion control,flow control, MTU and MSS, Rwnd-Cwnd and slow-start
0
TCP cwnd is increasing when congestion occur
1
Understanding TCP's slow start exponential increase congestion control policy
0
Is the TCP Reno Fast Recovery algorithm really linear?
1
What happens to the packets in the sender buffer when "eventually a timeout would be reached" for a **delayed ACK** in a AIMD TCP connection?
1
How TCP sequence numbers work in bidirectional communication/sliding window?
1
Tearing down the FSM description of congestion control
0
Difficulty in understanding the concept of "artificial inflate" and "deflate" in the fast recovery phase of TCP