Redirect inbound traffic to another router not running BGP

I've two routers on my ISP's core. First of them is a bit old Cisco gear, which is where I have eBGP sessions with my upstreams, IX and downstreams. The second is a MikroTik CCR, which act as DHCP Server, firewall, etc. for my customers.

Due to increasing of our network, the old Cisco router is not being able to deal with all current traffic fluidly, but because of internal reasons we can't change it to another gear for now.

I'm considering redirect all incoming traffic directly to MikroTik gear, in a such way it doesn't need to be routed by Cisco one. But I'm not sure it is possible.

I use a /29 range with each of my upstreams, so I can have MikroTik router addressed within same range as my and upstream's border routers. Ex.: 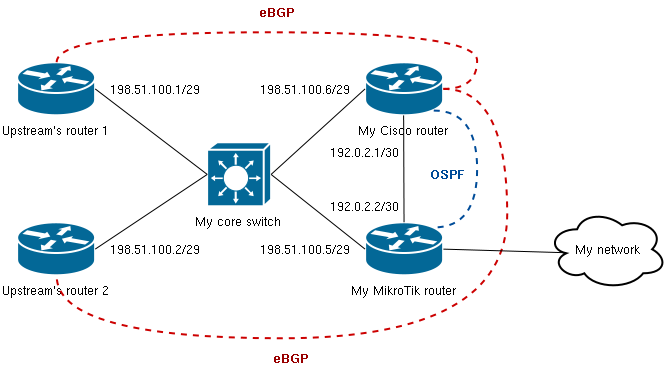 It would be easy to get this solved using as-path prepend if MikroTik gear was running BGP, but it isn't and can't get being for technical and commercial reasons.

I thought the redirection could be done by changing advertised prefixes' BGP next-hop attribute to MikroTik router's IP address, in the following way (in conformance with above network diagram):

However, I read somewhere this is only possible when BGP sessions are multihop, not when neighbors are directly connected. Moreover, from what I understood, changing next-hop is an iBGP only feature.

I'm far from being a Cisco expert and searched a lot but found no conclusive answer to my doubts, so could somebody tell me if is it possible to do what I described in above config. snippet or suggest any solution to my tricky situation?

Unfortunately I currently have no ways to run it on a lab (even using virtual machines) to test if works as intended.

I will be thankful for this and any further information you provide.

There may be a way to acheive this by exploiting the following BGP next hop rule:

When sending a message to an external peer, X, and the peer is one IP hop away from the speaker:

Could you try this:

This article shows an example:

This example shows how the next hop behaves on a multiaccess network such as Ethernet.

I assume that you want to affect INBOUND internet traffic, and you know how to handle your OUTBOUND traffic.

Then the easiest way to accomplish this would be to do "as-path prepending" on your Cisco router when it's advertising to its upstream. Then, your INBOUND internet traffic would definitely take the shortest as-path towards you, which will be through the MikroTik router.

To see an example, see this.

Create a vrrp address for the cisco and mikrotik and make that the default gateway from the core switch. Set the mikrotik as the higher priority member.

The mikrotik should have a default route received from the cisco router and a from "my network", preferring "my network" as the preferential route. This can be via OSPF or statically assigned.

Have an IP SLA probe either from the microtik or cisco to check the upstream connectivity to "my network". If there is a problem upstream, reduce the vrrp priority on the mikrotik router so traffic will head out via the cisco instead.