arp Requests not Being Answered After Server Move

So we just went through a big server move for a client - a couple of EX4200 switches we had installed from before-hand are now freaking out - all lights blinking always. Using WireShark I found that none of the arp requests are being answered. The central router is an SRX 550 which I am positive is online, but completely unpingable (I know this because i'm using traffic sent through it to type this right now). Any thoughts on why this could happen? It doesn't appear to be a broadcast storm, though every so often WireShark highlihgts a DHCP packet in red sent as a broadcast from 0.0.0.0 to 255.255.255.255.

Edit: I've attached a rough drawing of what my network looks like. The NS25 up top is really just a router-nothing exciting happens there. The SRX is used as a gateway/NAT/internal router, it looks like it isn't responding to "who has" arps, an any VLAN. I'll also add that there's another "management" network in front of the SRX but behind the NS25 which is working well. 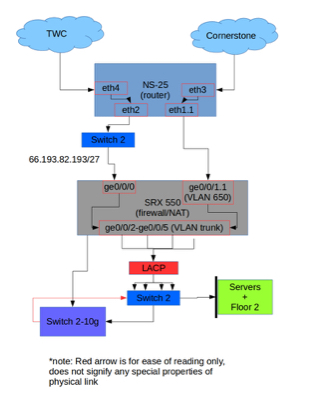 Edit2: I am able to hit the public side of my SRX, but not the private side, not even the devices I have a 1-to-1 NAT set with. What's going on here?

Edit3: I finally got into my SRX' management console - it says that the aggregated link I have to my access switches is down, even though there are activity lights on both.

Edit4:(boy, these are fun) Using Juniper's knowledge base #19798, I found that my SRX is not receiving the MAC addresses of the EX4200 (cli show interfaces ae0 shows 'Actor MAC and in Active LACP mode, with Partners all in Passive with MACS of 00:00:00 etc.). This is officially

So, for anyone desperate and frantically googling, it turns out that one of my core switches (a Juniper EX4200) lost its configuration (yes, all of them, even the rescue config), when it was powered down. I rebuilt the switch at around 5:30 that morning. The network was up by 8:30, it was a terrible night.

Not the answer you're looking for? Browse other questions tagged juniper arp switching or ask your own question.