Redistribution from OSPF into EIGRP and vice-versa issues 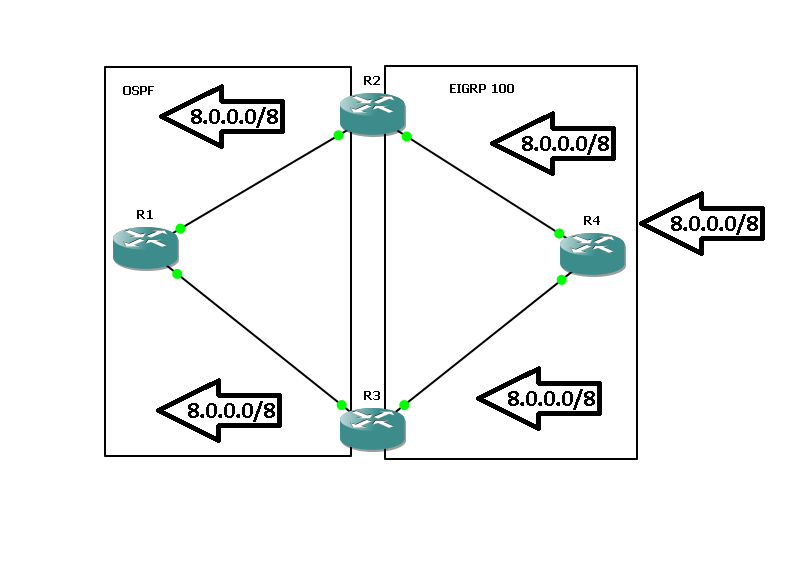 Since you don't provide any configuration I can't give you any specific answer.

In general when you perform two-way redisitrbution between two network protocols at multiple points you tag the routes so that when it reaches another redistribution point it will be filtered and hence not redistributed back into the original routing domain.

R1 should have two routes for 8.0.0.0/8 and possibly both in the routing table if it's the same cost. R2 and R3 will only have one route each with next hop of R4 in their routing tables since EIGRP has Administrative Distance of 90 which is more believable than 110 of OSPF.

Edit: Two-way redistribution at multiple points is always a bit tricky to understad but I'm gonna try to explain what I think is happening.

R4 retrieves the ad 170 advertisement from R2 but since it's has got a shorter path to 8.0.0.0/8 it will continue to advertise it's own path instead of the one coming from R2.

R2 retrieves route with ad 170 from R4 and route with ad 110 from R1 for network 8.0.0.0/8 and hence will insert route from R1 into routing table instead of the one from R4 and will not redistribute the eigrp route since it has already got a "better" route coming from R1.

Ofcourse it could be the other way around depending on who is first.

I found the answer to my question here Cisco Learning Network but do not know how to copy or use that stuff here in this forum!

Not the answer you're looking for? Browse other questions tagged ospf eigrp or ask your own question.

9
Static redistribution into EIGRP as internal failure
4
Cisco ASA RRI and OSPF redistribution
6
OSPF Route Tagging and BGP AS Prepend
2
Why do static routes not need a "default-metric" set when redistributing into EIGRP?
4
What is the purpose of EIGRP stubs?
3
OSPF and VRRP network advertisements
1
When do we need metric calculations when redistribute EIGRP to OSPF and vice versa?
3
Why OSPF E1 and E2 exist?
0
explanation on redistribution
0
Why does redistributing ospf in rip change the path of all routers on the rip network that are not directly connected to the router that redistributed