What is the point of ARP?

I'm a complete beginner at networking, but if I've understood this correctly, the gist of ARP is:

We want to use high level adresses to the highest degree possible but ultimately, we actually need the sinks MAC adress to transmit to it.

So, we are doing ARP because we do not want to broadcast the entire packet?

Follow-up #1: I recall reading that at least for Ethernet networks, broadcasting is basically as cheap as single transmissions. But at the time of sending the packet, we do not know if the sink is on Ethernet so we can not assume broadcasting is cheap?

Broadcasts interrupt every host on the broadcast domain, which is not a good thing. ARP must broadcast in order to find the MAC address, but, after that, the MAC address gets cached in an ARP table (it eventually times out). Caching the MAC address prevents excessive broadcasts from ARP - only the first packet needs to ARP (broadcast), and the rest of the stream can use the ARP cache.

The key to answer your questions is that for PC1 to communicate with PC2 what PC1 has and what PC1 want and how PC1 get what it want
First of all here in network we don't have any thing called high level address or low level address but we have physical address (MAC address) which is L2 address and have logical address (IP address) which is L3 address. And by using ARP we map both to gather to get something called ARP table.

So simply in our case we know 4 things from 5, we know SRC MAC, SRC IP , payload ,DST IP but we don't know DSP MAC. So the PC1 will send this packet as it is and for the part which it don't know it will send the Broadcast address of it (FF:FF:FF:FF:FF:FF) and only the PC which has this DST IP will replay this broadcast by its own MAC address which exactly what the PC1 need . 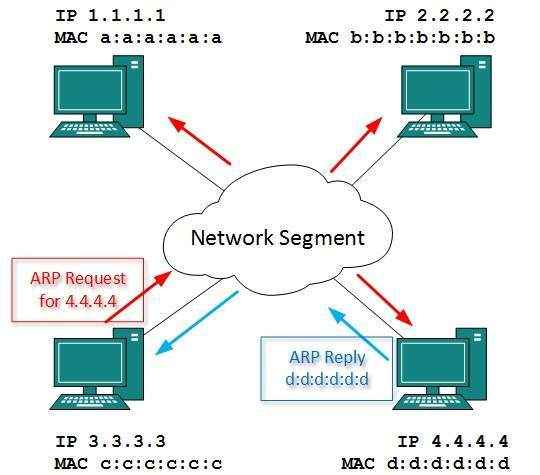 The address resolution protocol (arp) is a protocol used by the Internet Protocol (IP) [RFC826], specifically IPv4, to map IP network addresses to the physical addresses of host operates at layer 2 of OSI model . The protocol operates below the network layer as a part of the interface between the OSI network and OSI link layer. It is used when IPv4 is used over Ethernet is address resolution protocol it maps ip address to device Mac address . From layer 3 devices toward end devices traffic will be forwarded on basis of arp and Mac address table. Arp main function is to discover physical address of machine with network address. Arp acts as communication bridge between layer 2 and layer 3

We can see arp table in desktop with command arp -a

Not the answer you're looking for? Browse other questions tagged ip ipv4 mac-address ip-address arp or ask your own question.

14
What happens when the ARP cache overflows?
6
How ARP works in case of Virtual machine?
6
Understanding ARP and Routers
14
How broadcasting works on different networks?
2
Can PC2 on subnet mask /23 send a ping to PC1 (both connected on different router ports/networks)
11
Why do we need MAC Address if we can uniquely identify each machine with an IP Address
5
Network Device sending ARP request (opcode 1) but with Source IP 0.0.0.0
2
How does a router know the destination mac?
1
ARP cache in firewalls and difference from an end point device