This design guide on networkcomputing.com states the following:

When uplinking to Nexus 5Ks, one topology option is to dual-home the physical Fabric Extender. Dual-homing a FEX provides path redundancy, but cuts in half the total number of Fabric Extenders you can deploy

Let's say I have two Nexus 5000 series switches. They support a total of 24 FEXs if each FEX is dual homed. If I configure vPC on my 5000 series switches and dual home my FEX up to each switch, will I now only be able to connect 12 FEXs instead of 24 using these two switches?

The configurations are as follows:

•Total number of host vPC — With Enhanced vPC, each FEX port can be part of a host vPC. The host vPC does not consume port channel resources on the parent Cisco Nexus 5000 Series device.

please may you check this link Using Enhanced vPC

You need to read the fine print in the Cisco documentation:

Just because you have the hardware capability to connect a lot of devices doesn't mean that the software will support it. Based on the note above, the number that the software supports may vary per code release, and it may be lower than the number of physical connections you can make.

It seems pretty clear from the table that the number of FEX on a 5000 or a 5000 vPC pair is the same number: 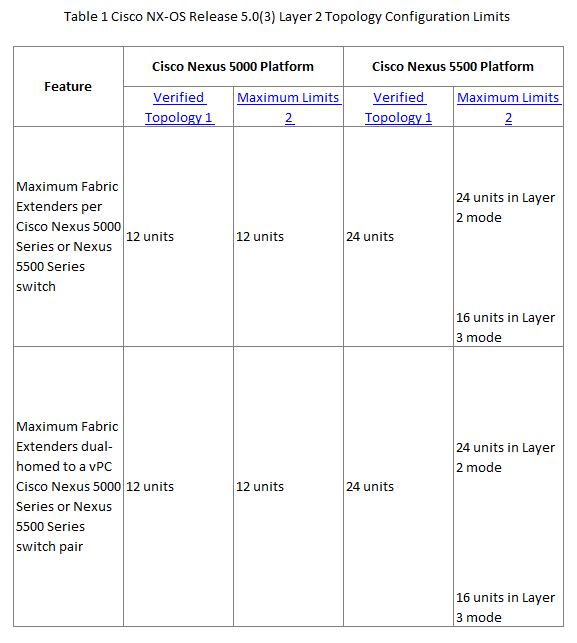 Not the answer you're looking for? Browse other questions tagged cisco cisco-nexus vpc data fex or ask your own question.