Ask Question
Asked 5 years, 2 months ago
Active 1 year, 10 months ago
Viewed 633 times
2
Closed. This question is off-topic. It is not currently accepting answers.

I'm not a network guru. I have had this scenario a few times at a hackathon or small event for technical people. There are usually a group of 50-200 but with an average of anywhere up to 4 devices per person making it necessary to support anywhere up to 1000 devices over wifi. I usually have a few physical ports in the wall of an event space and a few home routers to play with.

The challenge is that there might only be a limited number of allocated ip addresses on the existing LAN usually in some sort of centralized set up, but usually not enough IP addresses for the number of devices being requested.

So finally my question: if the original network is on 192.168.1.0 can I set up a new network broadcast domain such as 172.16.0.0 etc using one of the routers and allocate enough ip numbers for devices. Essentially taking 1 IP allocated by the DHCP on the existing network and multiplying it into effectively 1000's of IP addresses in a new secondary private network space. 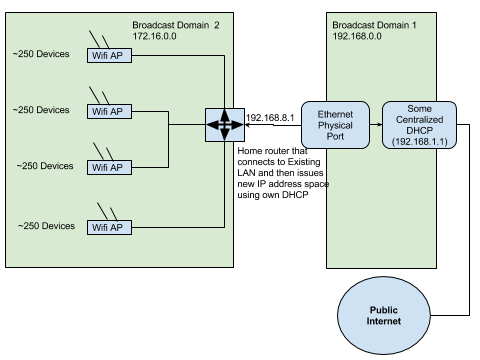 Its possible that this scenario may work in certain circumstances but not others, or that it may work but with limited functionality, so for bonus points and to help understanding try breaking your answer down into these parts...

You can daisy chain multiple networks together as long as the routers are aware of each others Routing tables. Sort of.

Be careful though. Most of the routers you'll be working with have firewalls,nat, and so on. I suggest that you turn all that off in the second router and let the first router do all the security and such.

Not the answer you're looking for? Browse other questions tagged routing router dhcp ip lan or ask your own question.

3
Create LAN B, and use LAN A’s internet connection
3
Easiest way to create VPN over a LAN (with good reason!)
1
Configuration and hardware for custom office networking
1
Regarding the DHCP issue with wireless LAN controller
2
Failover with two ISPs, one with public and one with private addresses
2
Why to use public IP addresses within private networks?
1
Private IP vs MAC
0
What are the differences between packet forwarding and network address translation in layer 3?