I'm trying to set up a small network such as the one in attached picture. 3 routers, 3 switches, 3 endpoints. Color boxes denote subnets. 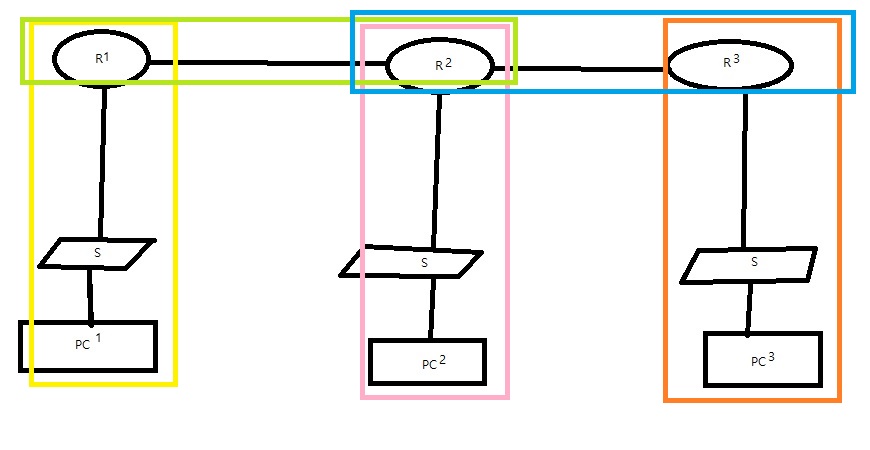 If I want to have only 1 DHCP server, which router would be the best/how would it be set up? I believe I should be able to set any one router to work as DHCP and hand out IPs from different pools for any endpoints(except for routers which have static IPs).

So, questions: 1. If R1 becomes DHCP server, how does it determine which pool to use for PC2 & PC3? Even with DHCP relay setup, they'd be coming from the same interface(same line). Or does R2 & R3 replace the source address when relaying the DHCP broadcast packets so R1 can look at that and use it to determine which pool?

Kinda confused here, any help would be awesome!

It's based on the sending interface where you have configured the ip-helper option(or dhcp relay in juniper). Look up giaddr.

If you have 2 ip adresses on the svi/interface it will send from the primary then the secondary.

Not the answer you're looking for? Browse other questions tagged routing dhcp design or ask your own question.

10
SRX DHCP client compatibility with HP Procurve DHCP Relay
1
DHCP pulling from pools other than within subnet
2
How are VPN Clients given IP addresses when they connect to VPN Routers such as VyOS? (How do Virtual IP Address Pools fit in?)
2
DHCP relay on Juniper MX
3
What's the difference between DHCP Disabled or Relay on an access point?
2
NXOS DHCP Relay - overwriting Option 54 (Server Identifier) differently in DHCPDISCOVER vs. DHCPREQUEST?
0
How the device chooses between multiple DHCP pools?
0
Per-VLAN DHCP pools on the switch