What is "collision domain"

What happens if more than one of the stations or ports wants to send a frame at the same time? Again, switches differ from hubs. In a hub, all stations are in the same collision domain. They must use the CSMA/CD algorithm to schedule their transmissions. In a switch, each port is its own independent collision domain. In the common case that the cable is full duplex, both the station and the port can send a frame on the cable at the same time, without worrying about other ports and stations. Collisions are now impossible and CSMA/CD is not needed. However, if the cable is half duplex, the station and the port must contend for transmission with CSMA/CD in the usual way.

I can't find the definition of collision domain in the book, or by searching.

Is it a definition that is not just for the context in the quote, but also for a more general case?

This will be a bit of a layman's answer, rather than quoting spec, but it should be accurate.

The collision domain is the sum total of the network segment (hosts, hubs) affected by the collision, and forced to deal with it by a random backoff delay.

Anytime a collision is detected on an Ethernet line, any and all interfaces on that line are required to stop transmitting. They each then come up with a random amount of time to wait before transmitting again, in an attempt to avoid another collision. In a crowded network, this delay will start to add up very quickly, and the collision domain is essentially the sum total of equipment that delay affects.

As in your quote, it comes up a lot less these days. The original Ethernet gear that filled the role of the switch was a hub, which simply repeated any frame sent to it out all of the other ports. Once a network got even lightly congested, this made collisions a common symptom. Modern switch technology virtually eliminates that problem, since any frame received by the switch is only sent to the host it's intended for. The only possible collision is between a host and the switch, making it a very small collision domain, affecting only that host.

With the advent of switches the concept of collision domain shrank to the port on the switch, and as was noted collisions do not occur on full duplex ports.

Now, let's take this to networks. Like the other answers here, before, these devices called hubs were used to connect various hosts. The hub was also a dumb device, in the sense that whatever data it received from one port, it would simply copy to all the other ports. Anyway, the problem with hubs was that it had only 1 collision domain. What do I mean by that? It meant that if I connected 5 hosts to the hub, it would only allow space (like our tunnel example) for just one system to transfer data at a time. If one host is transmitting data, and another host tried to transmit data, a collision would occur, or the two cars would collide and go boom! So when you talk about a collision domain, we think of a shared medium wherein collisions can occur. Of course, lot of prevention mechanisms came out like switches and CSMA/CD, etc. etc, you can read about those in the other replies. 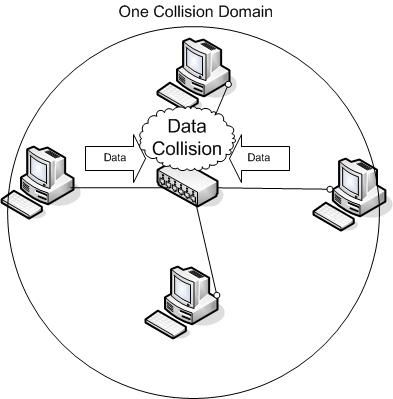 The image above shows that two hosts on either side of the hub tries to send data at the same time and since there is only one collision domain, only one is allowed to send. Two = boom (as shown in the image).

Not the answer you're looking for? Browse other questions tagged switch errors or ask your own question.

16
What happens when 2 computers transmits at the same time to a 3rd one in a full duplex switch?
2
Why don't switches always flood?
1
How collisions are handled in the daisy-chained switches?
5
I need the functionality of a pair of patch panels but I don't want to run one cable per port
1
Suppose we have a computer Network formed using a HUB but every connection is Full-Duplex. Would we STILL have the possibility of collisions?
1
Half duplex setting switch forwarding frame collides with host forwarding frame
3
Collision domain question
2
If no CSMA/CD on switches what are they using
1
Do switches allow parallel connections?