I am trying to set up communication across a network, and I have run into a bit of a problem.

In the diagram below, why is it that I cannot ping host 2 from host 1? Router 1 has interfaces on both networks net1 and net2.

What rule do I have to add to the routing table to tell router 1 that it can access net 2 on its 2.250 interface? 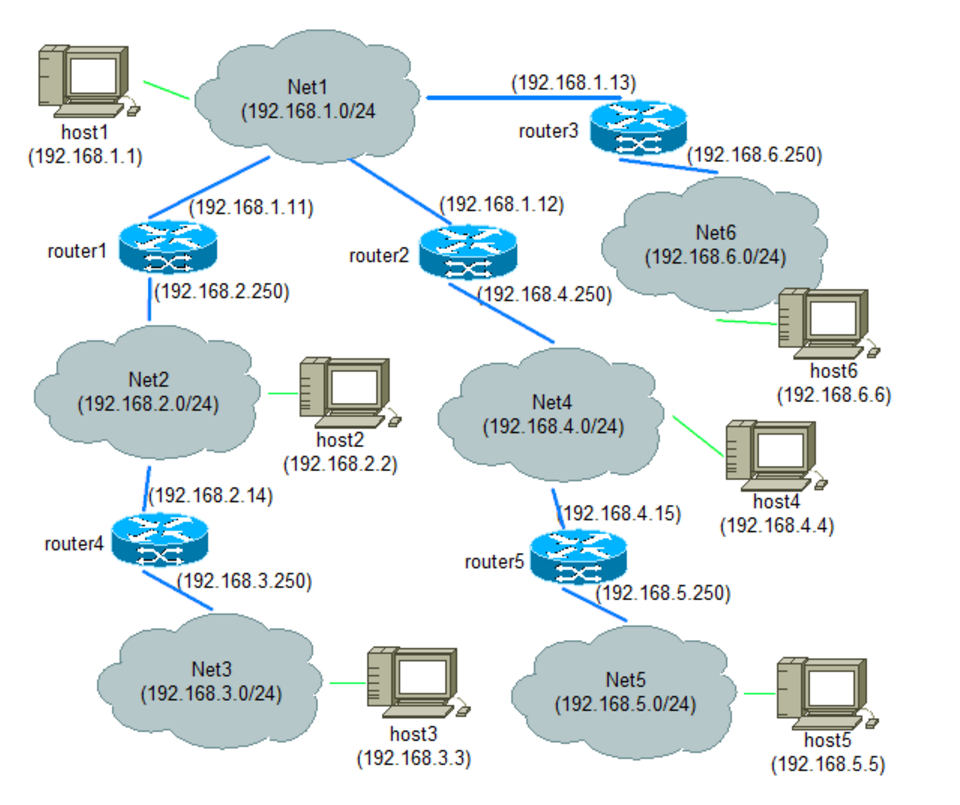 You likely have a routing problem, but it probably isn't on R1 (which should know both subnets because they are directly connected). We wouldn't be able to confirm without knowing the router/host configurations and possibly the router vendor/model.

Having more than one router, each with distinct networks beyond it and not directly connected to the other routers, on the same subnet as hosts can be less than ideal. While it can work just fine, there are generally not "good" solutions to the problems that arise.

First, you do have to make sure that the each router knows about the networks beyond the other routers. Static routes are problematic as they are more difficult to maintain and prone to error. So this means running a routing protocol. (For the rest of my answer, I will assume that a routing protocol is running between the routers.)

Running a routing protocol on the routers on the same network where hosts are connected creates security implications. This can provide valuable information to an attacker (internal or external on compromised resource) about the network topography and subnets in use. Additional steps would be required to secure this.

Second, you have the issues associated with the hosts themselves. Typically hosts only have one "default" route or gateway where they will send all traffic destined to non-local subnets.

Here you have a number of options, none of them what I would consider "good":

So, what are alternatives? Well, if you go back to my statement early on in this post, there are a few things I could consider better options:

The only thing i guess, you need to do is to add a route on host1 and 2:

Router already knows hoe to reach the two networks, ´cause it have directly connected.

You need to have routing set up on the routers so that every router which is on the networks of the two hosts knows how to reach the other network.

This would work if each host's gateway was Router1, but that may not always be the case. The whole point of routing is that the routers know how to reach the other networks, even if they aren't attached to the networks. You can do this dynamically with a routing protocol, or statically with static routes configured in the routers. Static routing doesn't scale, and it can't automatically respond to changes in the network.

Check the basics on host 1 and host 2:

Does host 1 have a default route via router 1, or a specific route to host 2's network via router 1?

Does host 2 have a default route via router 1, or a specific route to host 1's network via router 1?

As you've provided no useful debug, it's difficult to guess what's going on, especially as your diagram mentions many devices, but we're only interested in three of them - two hosts and a router - simplify the problem for yourself, and you may find it easier to work out the solution.

Not the answer you're looking for? Browse other questions tagged routing ping or ask your own question.

5
Route does not work / LAN port not reachable
1
Problem routing multiple switches and 1 router
1
How does a packet travel across multiple routers/subnets?
3
Router can ping and resolve hostnames, but VLANs and switch cannot
2
Why can't I ping the next hop router on a directly connected network?
2
EIGRP advertising of routes for other networks behind us
0
Simple VyOs Static Routing on GNS3
2
Cisco, Router can communicate; hosts cannot