Should the source and destination protocol addresses be the same in an ARP reply packet?

I'm trying to understand the contents of an ARP packet and the request/reply exchange from a Data Communications textbook and one example just doesn't make sense to me.

There is an example that states that an ARP packet request will look like this (assuming both devices are on the same network): 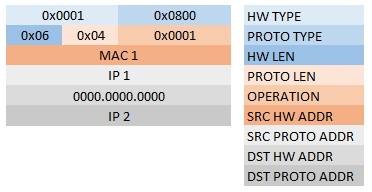 This makes perfect sense based on the information in the book.

The example then goes on to state that the reply would look like this (same assumptions): 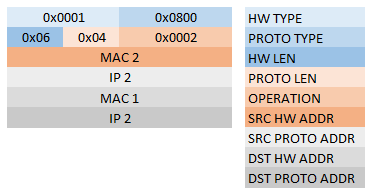 Is my book correct? If so, why?

When in doubt, the RFC which creates the protocol usually has the answer. RFC 826, An Ethernet Address Resolution Protocol has a description of what happens when a host receives an ARP request, including the rationale for why it is done the way it is. It says that you, "Swap hardware and protocol fields, putting the local hardware and protocol addresses in the sender fields." Some may interpret this to mean that you only change the sender fields, while other may think that swap means swap. This is how you get conflicting information and implementation of these protocols. Often a succeeding RFC will come out to explain which direction is the correct one. In this case, ARP is really a layer-2 communication, so the destination IP address isn't really the issue in a reply because the reply is back to the requesting layer MAC address, and it is not passed back up the stack to layer-3.

When an address resolution packet is received, the receiving Ethernet module gives the packet to the Address Resolution module which goes through an algorithm similar to the following. Negative conditionals indicate an end of processing and a discarding of the packet.

Notice that the triplet is merged into the table before the opcode is looked at. This is on the assumption that communcation is bidirectional; if A has some reason to talk to B, then B will probably have some reason to talk to A. Notice also that if an entry already exists for the pair, then the new hardware address supersedes the old one. Related Issues gives some motivation for this.

Generalization: The ar$hrd and ar$hln fields allow this protocol and packet format to be used for non-10Mbit Ethernets. For the 10Mbit Ethernet takes on the value <1, 6>. For other hardware networks, the ar$pro field may no longer correspond to the Ethernet type field, but it should be associated with the protocol whose address resolution is being sought.

Why is it done this way??

Periodic broadcasting is definitely not desired. Imagine 100 workstations on a single Ethernet, each broadcasting address resolution information once per 10 minutes (as one possible set of parameters). This is one packet every 6 seconds. This is almost reasonable, but what use is it? The workstations aren't generally going to be talking to each other (and therefore have 100 useless entries in a table); they will be mainly talking to a mainframe, file server or bridge, but only to a small number of other workstations (for interactive conversations, for example). The protocol described in this paper distributes information as it is needed, and only once (probably) per boot of a machine.

This format does not allow for more than one resolution to be done in the same packet. This is for simplicity. If things were multiplexed the packet format would be considerably harder to digest, and much of the information could be gratuitous. Think of a bridge that talks four protocols telling a workstation all four protocol addresses, three of which the workstation will probably never use.

This format allows the packet buffer to be reused if a reply is generated; a reply has the same length as a request, and several of the fields are the same.

The value of the hardware field (ar$hrd) is taken from a list for this purpose. Currently the only defined value is for the 10Mbit Ethernet (ares_hrd$Ethernet = 1). There has been talk of using this protocol for Packet Radio Networks as well, and this will require another value as will other future hardware mediums that wish to use this protocol.

For the 10Mbit Ethernet, the value in the protocol field (ar$pro) is taken from the set ether_type$. This is a natural reuse of the assigned protocol types. Combining this with the opcode (ar$op) would effectively halve the number of protocols that can be resolved under this protocol and would make a monitor/debugger more complex (see Network Monitoring and Debugging below). It is hoped that we will never see 32768 protocols, but Murphy made some laws which don't allow us to make this assumption.

In theory, the length fields (ar$hln and ar$pln) are redundant, since the length of a protocol address should be determined by the hardware type (found in ar$hrd) and the protocol type (found in ar$pro). It is included for optional consistency checking, and for network monitoring and debugging (see below).

The opcode is to determine if this is a request (which may cause a reply) or a reply to a previous request. 16 bits for this is overkill, but a flag (field) is needed.

The sender hardware address and sender protocol address are absolutely necessary. It is these fields that get put in a translation table.

The target protocol address is necessary in the request form of the packet so that a machine can determine whether or not to enter the sender information in a table or to send a reply. It is not necessarily needed in the reply form if one assumes a reply is only provoked by a request. It is included for completeness, network monitoring, and to simplify the suggested processing algorithm described above (which does not look at the opcode until AFTER putting the sender information in a table).

The target hardware address is included for completeness and network monitoring. It has no meaning in the request form, since it is this number that the machine is requesting. Its meaning in the reply form is the address of the machine making the request. In some implementations (which do not get to look at the 14.byte ethernet header, for example) this may save some register shuffling or stack space by sending this field to the hardware driver as the hardware destination address of the packet.

There are no padding bytes between addresses. The packet data should be viewed as a byte stream in which only 3 byte pairs are defined to be words (ar$hrd, ar$pro and ar$op) which are sent most significant byte first (Ethernet/PDP-10 byte style).

I quite agree with Mr Maupin's answer -- when in doubt, consult appropriate RFCs -- but a complementary point of view is this: When you read something about networking that sounds peculiar, try it yourself and survey some equipment.

Having implemented ARP in my time, it had never occurred to me that anyone could misread the ar$tpa field. The definition of it is absolutely unambiguous: "(ar$tpa) Protocol address of target" [of this packet implicit from context].

I surveyed all my easily available equipment and all, without fail, had the asker's IP address in the second slot in every ARP reply. (Windows, Linux, HP, Cisco, various networked devices.)

Here the simplest explanation is almost certainly the correct one: The textbook is wrong: just a simple typo in all probability. Why not write to the author and see what reply you get?

Not the answer you're looking for? Browse other questions tagged protocol-theory arp rfc or ask your own question.

6
How ARP works in case of Virtual machine?
1
ARP Network monitoring and debugging:
1
How do protocol stacks determine the destination mac of reply packets?
2
How does my network interface know which destination IP to ask for in an ARP request packet?
1
What is the difference between ARP and BUM Traffic?
1
Why does the receiver of an ARP request updates its cache table
3
Can the Ethernet source, ARP request SHA, ARP reply THA differ? Also ARP request TPA, and ARP reply SPA?
3
To what address does ARP reply in the presence of MAC masquerading
4
Why would a switch ever send an ARP request for a MAC address when it can just wait for the first packet to be received from a device?