In MPLS VPN, Which one become first? MPLS Label tag or VPN encapsulation?

In MPLS VPN network, which one is the first thing to do? I mean label tagging is first or VPN encapsulation is first? If you can, please explain about this case.

I think your question is not truly correct. First of all, as explain here

"an MPLS VPN is a VPN that is built on top of an MPLS network, usually from a service provider, to deliver connectivity between enterprise office locations. "

The MPLS is the mechanism that directs data from one network node to the next, based on short path labels instead network addresses. This avoid the routing table complexity. MPLS works in conjunction with IP and its routing protocols.

Based on this, MPLS VPN is a method to harm the power of MPLS to create virtual private networks. There are three different type of MPLS VPN:

So, the protocol on the base of all this environment is the Label Distribution Protocol (LDP), which routers, capable of MPLS, exchange label mapping information.

Label tagging is developped to works MPLS network also without VPN. Then, MPLS VPNs born to combine the power of MPLS and the Border Gateway Protocol (BGP) routing protocol: MPLS is used to forward packets over the provider’s network backbone, and BGP is used for distributing routes over the backbone.

The common thing (if you analyze a packet captured in a MPLS network) is the MPLS header that is (in a L3 MPLS) always putted between datalink layer and IP layer. 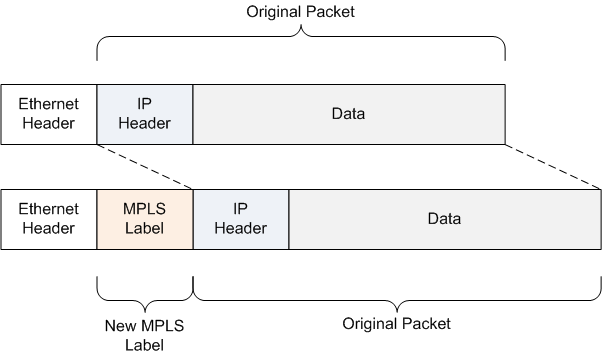 In a L3 MPLS VPNs, for example, the situation is this: 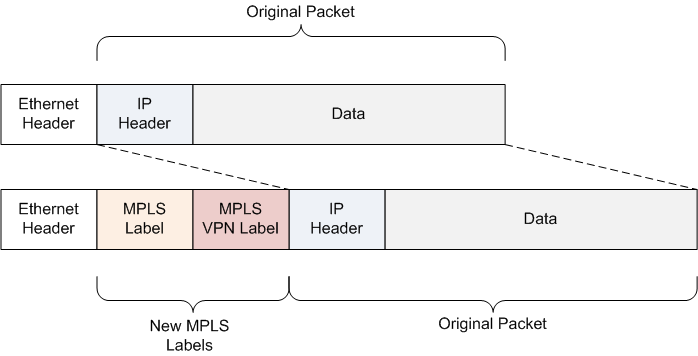 In details, the MPLS header frame format is:

I think you are confused.

In an MPLS VPN the layer 2 or layer 3 traffic being carried over an Label Switched Path is not encapsulated - MPLS does not provide an encapsulation method - it is a transport method.

MPLS labels are inserted (usually) above say an the Ethernet header and below the IP header, and it provides a transport mechanism across a packet switch network. It does not provide any encapsualtion method.

The "payload" is label switched across the LSP, only a transport service is being provided (in the case of simple layer 2 Ethernet VPN or a layer 3 IP VPN).

Not the answer you're looking for? Browse other questions tagged vpn mpls network-core mpls-vpn or ask your own question.

9
Label Distribution Protocol(LDP) in MPLS
1
Does one need to personally manage MLPS VPN connection to have MPLS between building or can the ISP provide this connection for you?
1
What are some use cases of a labeled unicast AFI/SAFI(1/4)?
3
SD-WAN vs MPLS VPN
3
why two VPN in VPN MPLS L3 can have same addresses?
1
Are mpls tunnels the only option for reachable L3vpn next-hop?
0
VPN MPLS L3 Routing
0
Why does Junos create two entries in LIB for single tag- one with "S=0" and other with implicit "S=1"?
2
MPLS-BGP - VPN isolation - RFC 4364
2
Many ways of configuring MPLS pseudowires, and choosing only one