VLAN routing on a SonicWall TZ215

I desperatly need some help. Ok, quick topic. We've a fiber optic link configure through a Cisco 2960 with 2 externals VLAN (one for voip, one for data configure through 4 of the 2960 ports) on which I don't have any control. In one of those 2 VLANs, I've all my local building patch panel and switch configure with 5 internal VLANs (management, phone, computers, wifi public and wifi admin). The computers VLAN (the X3:V73 on the TZ215) gives address over DHCP but in the range of the VLAN on the Cisco 2960 to be able to have direct internet access without using the WAN port on the TZ215. All that is working perfectly fine. But during my test phase, I've used the SonicWall IP as my gateway (X3:V69, X3:V73, X3:V83) and all the concerned VLANs grouped on the same TZ215 interface (X3 in this case), give me the access to all the VLAN configure on that port, which is nice. But now, after changing the gateway (to use the internet gateway of the fiber provider on the Cisco 2960) to put all computers in productions mode, I'm not able to access the other VLAN on the X3 port. I'm pretty sure it has something to do with the static routing, but after an afternoon trying to resolve this issue and a big headache later, I'm here asking for some help. I've tried to configure the SonicWall with 2 gateways, very bad idea with Windows...it slows internet badly and internal request on local computers just doesn't work.

Yes, sorry...I'll try to be a little more clear.

X3 Interface enter the first port of a GS724T linked with another GS724T and two FS728TP, all linked together by a trunk port.

So, my SonicWall computer vlan (X3:V73) address the computers in the pre-configured "good" range of IP to gain internet access without TZ215 WAN port.

So the switch in the port 3 doesn't gain internet access directly because it's not in the good range of the pre-configured Catalyst 2960 but that's totally fine.

In this scenario, as long as I keep the TZ215 corresponding interface IP as my gateway in my DHCP pool, I can access all 3 vlans configured on the same port even if I can't access internet, and that's exactly what I want. But as soon as I switch to the fiber provider gateway in my DHCP pool (to disable the WAN port on my SonicWall), vlans doesn't seem to see each other. I would like to be able to configure some of the vlans on the TZ215 X3 Interface (with my 3 vlans) to communicate together. Example, the X3:V73 Windows 2012 Server accessible from the X3:V83 Wireless Admin Network.

But the X3:V73 assign address in the range of 10.146.10.0 and the X3:V83 assign address in the range of 10.83.0.0. As long as I keep the interface IP of the TZ215 as my gateway, everything works fine but the goal of our last month mega-network-redesign was to gain access directly without the TZ215 WAN Port. And to achieve that, I have to switch the gateway to the one provided by our fiber provider and as soon as I did that, I lose access to the other vlan on the X3 Port.

BTW, Thank you VERY much to try to help me...If you really need a drawing, I'll try to "mspaint" something tomorrow morning.

Ok, here's the network diagram with old and new network : 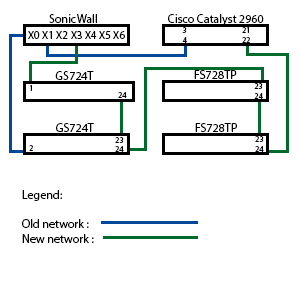 The question is, I want to do both. Remove the WAN cable and be able to ping all other devices on my 3 vlans on X3 port of the SonicWall.

I hope it's a little more clear and I would really like to thank everyone for their precious help.

You need to leave the gateway set to your TZ215 device...how is it supposed to know what route to use if you asks someone else? :) You are not tied to WAN interface X0, but you need to assign a WAN zone to an interface....and define routing between zones. It's not clear what your situation is, a network diagram could be a terrific help, though.

Not the answer you're looking for? Browse other questions tagged routing vlan sonicwall cisco-2960 or ask your own question.

3
SonicWall : Configuring WAN X1
3
SonicWALL TZ215 : 2 LAN interfaces and 1 WAN
1
Cisco Small Business RV 325 - Loose internet when VLAN enabled
3
I can't get a VLAN to talk to the LAN on a SonicWALL
1
Sonicwall Interfaces and DHCP servers
2
Sonicwall tz400 - is the proposed architecture for a site to site VPN possible?
3
Share an internet connection within three separate subnetworks/VLANs
0
Configuring HP Smart Switch and SonicWall with VLAN