How will VRRP and OSPF interact in the following scenario? 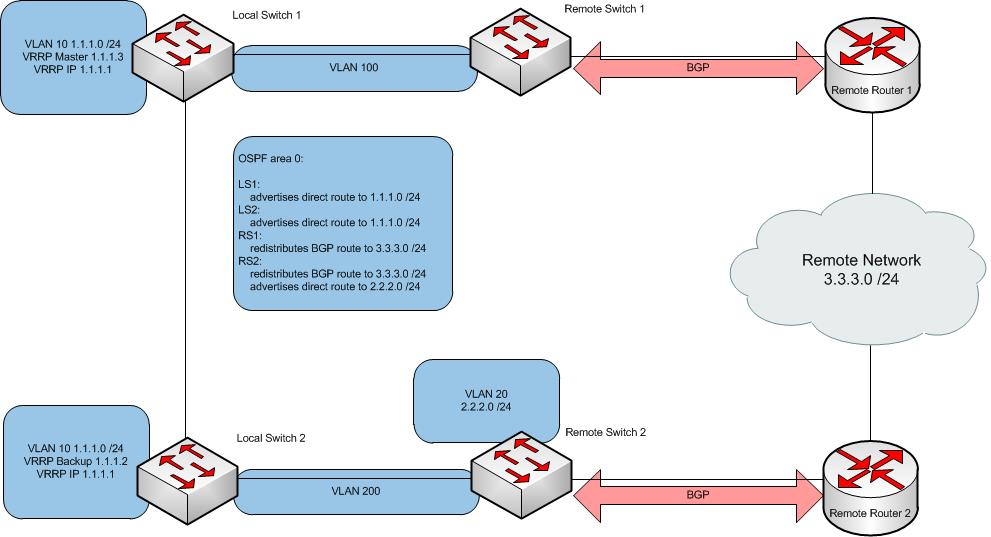 Where the OSPF area is comprised of the Local and Remote L3 Switches. Remote Network 3.3.3.0 is advertised to Remote Switch 1 and 2 using BGP (by the Remote Routers), both switches redistribute this route via OSPF. Remote switch 2 also advertises the directly connected VLAN 20 2.2.2.0. The Local Switches both only advertise VLAN 10 1.1.1.0.

VRRP will create a virtual gateway, and one router (layer-3 switch?) will be the primary and the other router will be the secondary which takes over if the primary router fails. This has nothing to do with the routing protocol.

Not the answer you're looking for? Browse other questions tagged routing bgp ospf vrrp fhrp or ask your own question.

9
JUNIPER: Why is OSPF adjacency breaking when I enable FBF on an OSPF interface?
4
Why BGP choose wrong Next-hop address?
4
Cisco 877 - Advertise OSPF default route only when PPP is up
2
MCLag active-active and VRRP
2
OSPF question over dot1q trunk
6
What considerations should be made when determining whether to use the BGP "network" command vs Redistribution?
0
explanation on redistribution
3
Layer 2/3 Ring with VRRP/OSPF
0
Layer 2 redundant network and OSPF