Ask Question
Asked 6 years ago
Active 3 years, 9 months ago
Viewed 13k times
0
Closed. This question is off-topic. It is not currently accepting answers.

First of all, a good network diagram will always make it easier for others to understand what you are trying to say. Even a quick little diagram is better than nothing.

I made this in an attempt to understand what you were talking about: 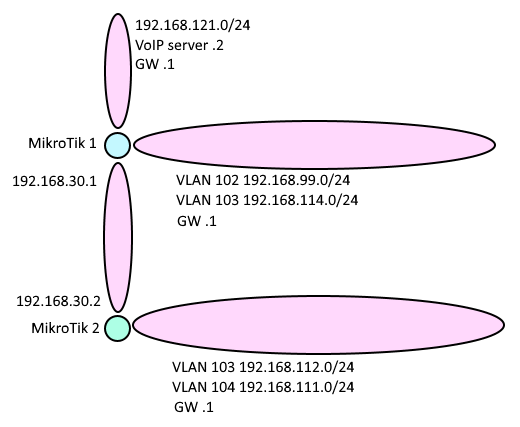 Stop thinking about the VLANs when you are talking about routing. A router does not care what VLAN a subnet is on until it needs to exit a VLAN trucked interface. While the router is routing between subnets, it just wants to know the subnet IP addresses.

Without more information it is hard to know what the problem is, but it is most likely a routing problem, just like @Nick B. mentioned.

Trunks are only used between two switches, or between a switch and a router to create a "router on a stick".

Since the two VLANs are on different routers with different subnet addresses, they aren't related at all. The traffic needs to be routed between the two routers.

Routers by default always create a route to directly connected subnets. So nothing should prevent two VLANs on the same router from communicating, unless the VLANs are configured incorrectly or firewall rules are blocking it.

As @Nick B. started at, do the following on the designated routers.

You might find the section on static routes in the Mikrotik Wiki helpful.

Firstly, you need to add a static route on Mikrotik 2 traffic to reach the voip server vlan on Mikrotik 1.

Secondly, you need to add a static route on Mikrotik 1 for return traffic to vlan 103 on Mikrotik 2.

Not the answer you're looking for? Browse other questions tagged vlan or ask your own question.