The switch management cannot send anything to a different layer-3 network without a default gateway. Telnet is a bidirectional protocol, and the switch, without the default gateway, would be unable to respond to the host which is attempting to establish the Telnet session.

When a host (including the switch management), wants to send a packet to another host, it needs to resolve the layer-3 address (IP, etc.) to the other host's layer-2 address (MAC, etc.) in order to build a layer-2 frame.

IPv6 does basically the same thing, but IPv6 doesn't have broadcasts, so it uses a special multicast group based on the last 24 bits of the IPv6 address. This doesn't interrupt every host on the LAN, and it, in all probability, with only hit the host for which it wants to resolve the layer-2 address. Multicast doesn't cross layer-3 boundaries, either, unless a router is configured to route multicast (off by default).

The short answer here is that the default gateway is the local router that gets traffic to other networks. It is the default way to get off of your network.

Remember, routers connect networks and switches create networks. If you are off on another (non-Vlan1) network, you must route the traffic. For instance, your home LAN (x.x.x.x) and your ISP network (y.y.y.y) have a router to connect them (commonly called a cable modem).

When I want to Telnet to the switch, I set the IP address of the VLAN 1 interface, and it works.

I was also puzzled to know that even though I did not configure a default gateway (using the ip default-gateway command) on my Catalyst 2960 L2 Switch. I could ping/telnet to it not only from a host on the same subnet, but also from hosts on remote subnets.

Hosts send packets to its default gateway when the packet's destination IP Address is in a different subnet, and if no default gateway has been configured they simply can't communication outside its local subnet. So, the question is how come the Switch's VLAN 1 Interface is a able to send data to the local router/gateway if it hasn't been configured with such?

Well, turns out that although the Switch's VLAN 1 Interface doesn't know the IP Address of its Default Gateway, it issues an ARP Broadcast to learn the MAC Address of packet's destination Host (just like it would if the packet's destination IP Address was in the same subnet) and once the router's LAN Interface receives the ARP Broadcast message it tries to match the Target IP Address to any of its routes, if a match is found (meaning that the router knows how to get to the subnet the Target IP Address resides in), then it replies with the MAC Address of the interface in which the ARP Message was received. 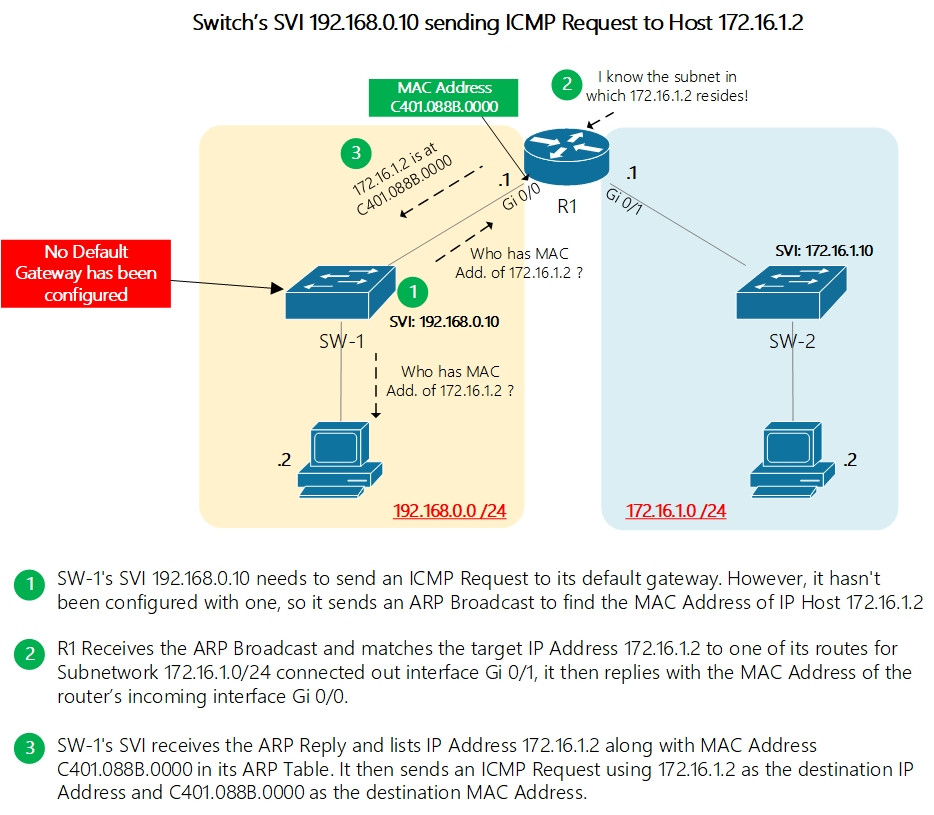 Update: As pointed out by @RonMaupin, Routers will only reply to ARP Requests for non-local IP Addresses if proxy arp is enabled on the gateway's Interface

Not the answer you're looking for? Browse other questions tagged cisco switch cisco-ios cisco-catalyst cisco-commands or ask your own question.