I am doing some work in a factory that is quite new, and have been asked to terminate some network cables - simple enough.

However on looking up at the cable trays, which are suspended from the ceiling, I see in various places, "Someone" has run 3-phase power cables in-amongst the (eg aprox 20) cat7 cables, for many meters, they have also CABLE TIED a network cable to that power cable as they are dropped down to each machine.

I was always taught that running network cables and power/lighting together was a no-no.

Am I right to be concerned about this? or is Cat 7 fairly interference-proof?

Edit: Photo added for general amusement - one of many examples. light blue = network, silver = power (coming from the power conduit, through the network tray and then down... 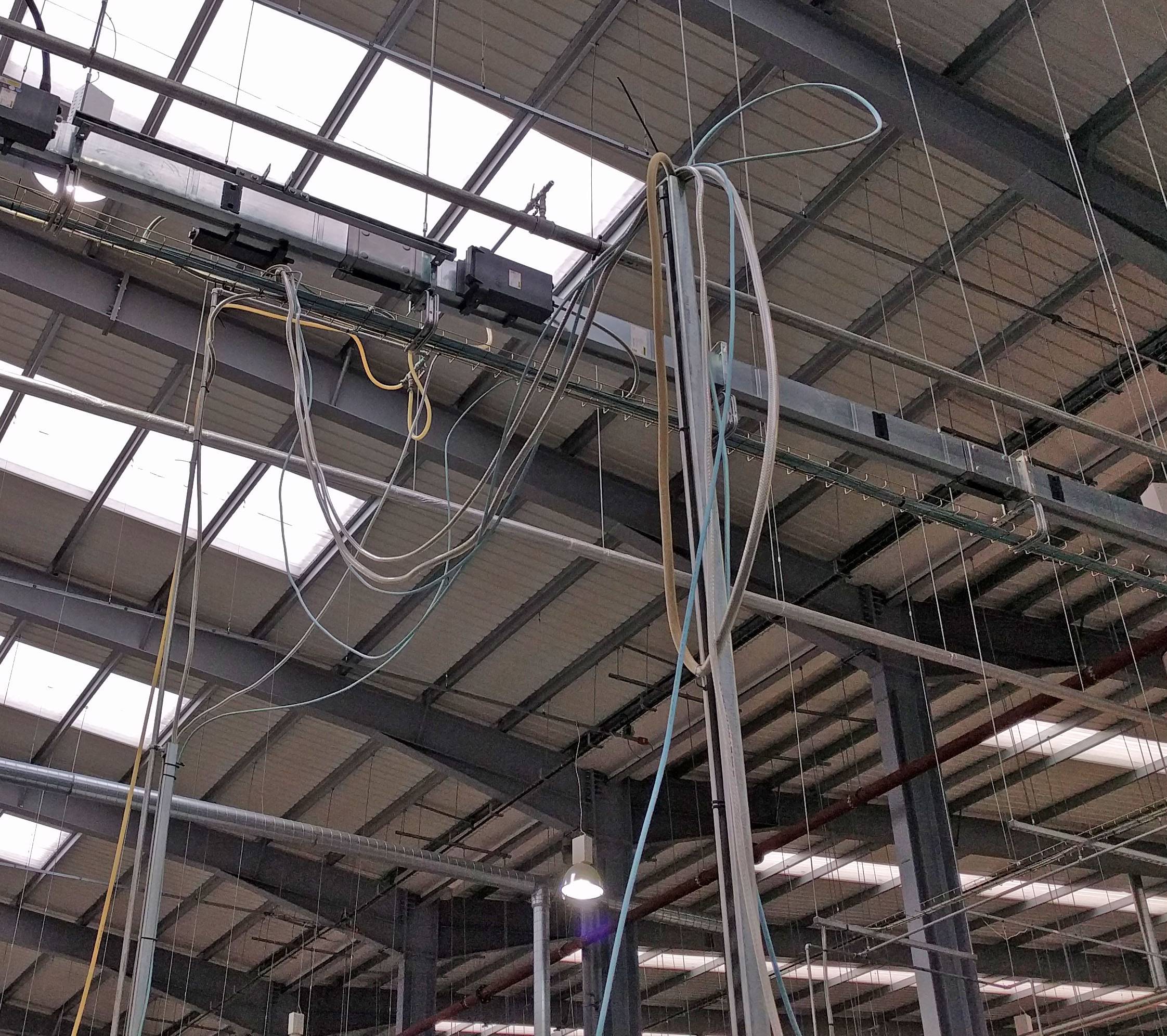 Legal and compliance questions aside, from pure technical perspective, the answer to your question is - it depends. Out of my own practice: even cheap UTP network cables, even twisted around 230V power cables for many meters in household environments, somehow seem to work fine and still have good bandwidth with no interruptions with all the washing machines and kettles running. Also from my experience, UTP wiring around fluorescent lightning in hanging ceilings has some effect to max speeds which FTP cable fully sorts out.

The theory is - the more current you run through 3-phase cable the more field you create around it which is interference for normal communication. Especially if loads are inductive. But Cat. 7 is very robust cable, so based on my observations, you'd probably be fine. But still, consider your local laws and regulations for cable installations.

Theres two seperate issues to consider, safety and interference. The authorities tend to mostly be concerned with the former.

Capacitive and inductive coupling are highy unlikely to be strong enough to cause a hazard, so the safety side of things is mostly about making sure mains doesn't get onto the signal lines even under circumstances of insulation failure. How this is achived will vary between countries and possiblly withing a country. Without knowing both what country you are in and the type of cables involved it's hard to tell if they are compliant or not. AIUI in the UK it would be compliant if the mains cables had an earthed metal layer, if the insulation on the data cables was rated to mains voltage or if the screen in the data cable was protectively earthed.

The interference side of things depends on a number of factors. In general two cables merely crossing each other are less of an issue than long runs in close parallell. Distance helps, higher twist rates helps and shielding helps. It also depends a lot on what exactly is flowing in the power cables, nice clean 50Hz isn't going to have much impact on ethernet even at high currents but if a lot of high frequency crap gets onto the power lines then that can be much worse.

You need to ask the AHJ (Authority Having Jurisdiction), such as your local fire or building inspector. Those are the guys who will make the final determination, and they can fine you and shut the building down until violations are remediated.

When running cabling, you should also consult the ANSI/TIA-569-C Commercial Building Standard for Telecommunications Pathways and Spaces. Here is an overview document, and what it says about that:

Co-installation of telecommunications cable and power cable is governed by applicable electrical code for safety. In addition, the following precautions should be considered in order to reduce noise coupling from sources such as electrical power wiring, radio frequency (RF) sources, large motors and generators, induction heaters, and arc welders;

The NEC (National Electric Code), NFPA 70, also has much to say about cabling. It has been adopted by all 50 states and most local jurisdictions. It doesn't just deal with power lines; there is quite a bit of it which deals with low-voltage (network) cabling.

Not the answer you're looking for? Browse other questions tagged layer1 cabling cable or ask your own question.

1
Practical limits of shielded Ethernet cable
0
How do i prevent dataloss, when installing an ethernet cable fairly close to an electric cable?

0
What type of cable is a cat 7 : UTP or STP ?
2
How to create Ethernet cables when I cannot figure out color of cat 5e cable wires?
2
T-568A/B on the same cable
2
Is it possible to carry POTS and gigabit ethernet over the same Cat 5e/6 cable?
12
Why do I need a crossover cable to connect devices of the same type?
1
Does the 568A vs 568B standard affect the transmitting and receiving wires on the CAT-5 cable?
1
Can bad cabling affect the overall network?
0
How southern cross cable can transmit IP/ Ethernet signals keeping in mind the physical limitation of Ethernet cables?
0
Is there a network cable tester device that tests the cables with realistic frequency instead of on/off leds?