I have the feeling the more I read about MSTP, the more confused I get. So here we are in order to make things clear once and for all.

Later in the document it says:

An MST region looks like a single switch to the CIST.

Which contradicts the sentence above, AFAIAC.

Now to the questions:

Now what exactly are the CST, the IST, and the CIST? Can someone draw me a simple MSTP topology with CST in red, IST in yellow, and CIST in green, so as to have a final reference without any ambiguous texts to be interpreted? :) 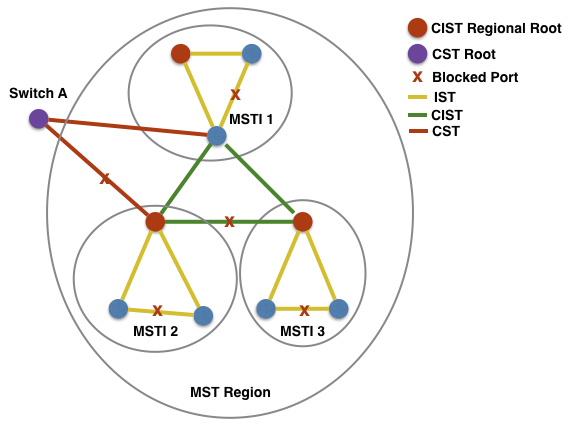 You jumped ahead to configuring MST instead of reading the Cisco documentation describing MST, Understanding Multiple Spanning Tree Protocol (802.1s). This document has multiple, colored diagrams, and a pretty good explanation of terms.

The IEEE 802.1s committee adopted a much easier and simpler approach that introduced MST regions. Think of a region as the equivalent of Border Gateway Protocol (BGP) Autonomous Systems, which is a group of switches placed under a common administration.

In order to clearly understand the role of the IST instance, remember that MST originates from the IEEE. Therefore, MST must be able to interact with 802.1q-based networks, because 802.1q is another IEEE standard. For 802.1q, a bridged network only implements a single spanning tree (CST). The IST instance is simply an RSTP instance that extends the CST inside the MST region.

The IST instance receives and sends BPDUs to the CST. The IST can represent the entire MST region as a CST virtual bridge to the outside world.

It all makes a lot more sense with the diagrams.

The spanning tree computed in a region appears as a subtree in the CST that encompasses the entire switched domain. The CIST is formed by the spanning tree algorithm running among switches that support the 802.1w, 802.1s, and 802.1D standards. The CIST inside an MST region is the same as the CST outside a region. 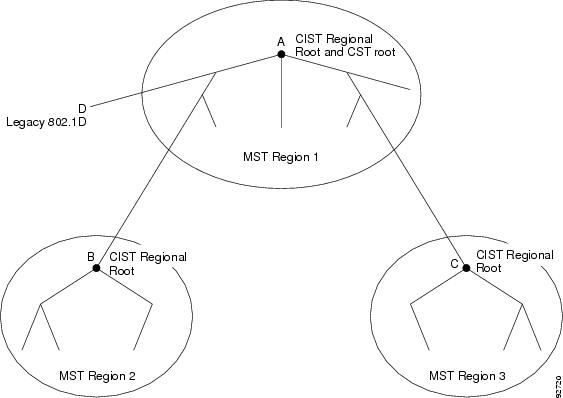 Some MST naming conventions used in the prestandard implementation have been changed to include identification of some internal and regional parameters. These parameters are used only within an MST region, compared to external parameters that are used throughout the whole network. Because the CIST is the only spanning tree instance that spans the whole network, only the CIST parameters require the external qualifiers and not the internal or regional qualifiers.

I've given this a lot of thought and I am attaching a technical drawing of my own. Especially the CIST and CST part in BenjaminDale's drawing didn't really make sense to me: why would the CIST be linking the instances? I currently see it the following way: 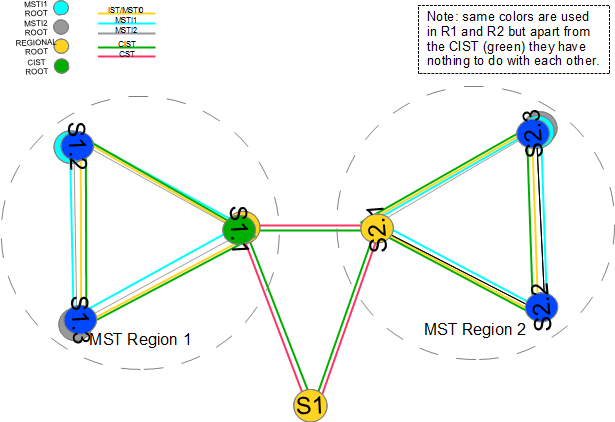 Not the answer you're looking for? Browse other questions tagged spanning-tree or ask your own question.

5
Spanning Tree design considerations: MSTP and regions
3
Multiple Spanning-Tree. Same VLANs on instance for all switches?
5
Understanding how spanning-tree protocol (STP) works, along with CDP and DTP
2
BPDUGuard and BPDUFilter on Spanning Tree Edge Port
5
When and where to use Spanning-Tree (Portfast)
3
Spanning tree - port roles and status during root bridge election
2
Fastest spanning tree in multiple-ring topology
1
Can we use both RSTP and MSTP spanning tree protocols in same network