What setup should be used to send traffic from multiple sources to both a dedicated destination per source and a common destination for all sources?

I have a computer with 6 Ethernet interfaces. The computer is used for logging and will continously log all data on all interfaces. No packet loss is acceptable and therefore no other applications are allowed to run on the computer.

Now I want to connect these same 6 data streams to a separate computer that will visualize the data in real time. The second computer only have one interface. The visualization is not as critical as the logging, so it is not as big a deal if I loose a packet here or there in this transfer.

What hardware setup should I use to connect my 6 sources to 7 destinations?

Clarification: this is my current setup. The number of interfaces might change over time so I would prefer a setup that is configurable. 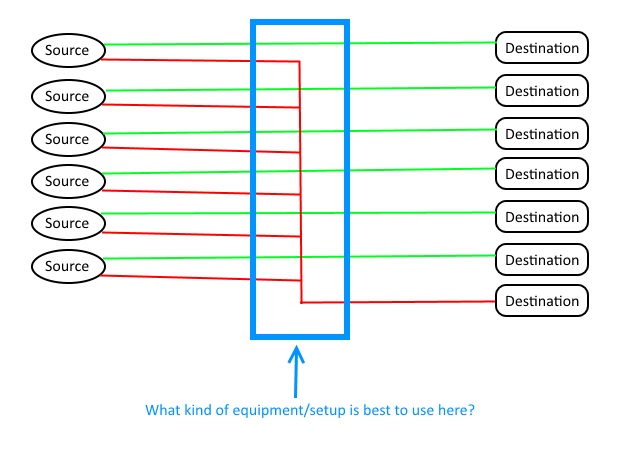 You could use a switch with the capability to mirror several ports to a single one.

This feature is called "mirroring" or "SPAN", it will replicate the traffic from mirrored port(s) to the mirroring one (on which of course you attach the visualization computer).

Some switch models will allow you to mirror only a single source port while other can mirror several source ports to a single one.

Ideally the mirroring port will have higher speed than the others, or you may loose some packets (mirroring 6 x 1Gb/s to 1 x 1Gb/s)... but you said it's fine this way.

As long as the switch backplane has enough bandwidth to handle all the flux simultaneously you should not loose any packet to the logging computer.

Optionally you can setup a VLAN for each source / destination pair to isolate them from each other.

Not the answer you're looking for? Browse other questions tagged routing switching or ask your own question.

7
Creating a JunOS firewall filter based on dynamic routing properties
2
Network performance when gateway connection is 100Mbps
6
Why can't a single port be used for both incoming and outgoing traffic?