What are the NAT boxes for in the topogogy?

The full topology is on page 7 I do not understand why the NAT boxes are only connected to edge. Why not have links from core to edge carrying traffic without NAT and links from core to A10 then to edge for traffic requiring edge?

The current core architecture is illustrated in Figure 7. It remains a pair of Cisco Nexus 7010s, the border a pair of Catalyst 6509s, some distribution/remote cores use Catalyst 6509s. NAT is provided by a pair of A10 AX3530 (primarily wireless, although an option is available for unit wired networks and forthcoming wired 802.1x initiative). 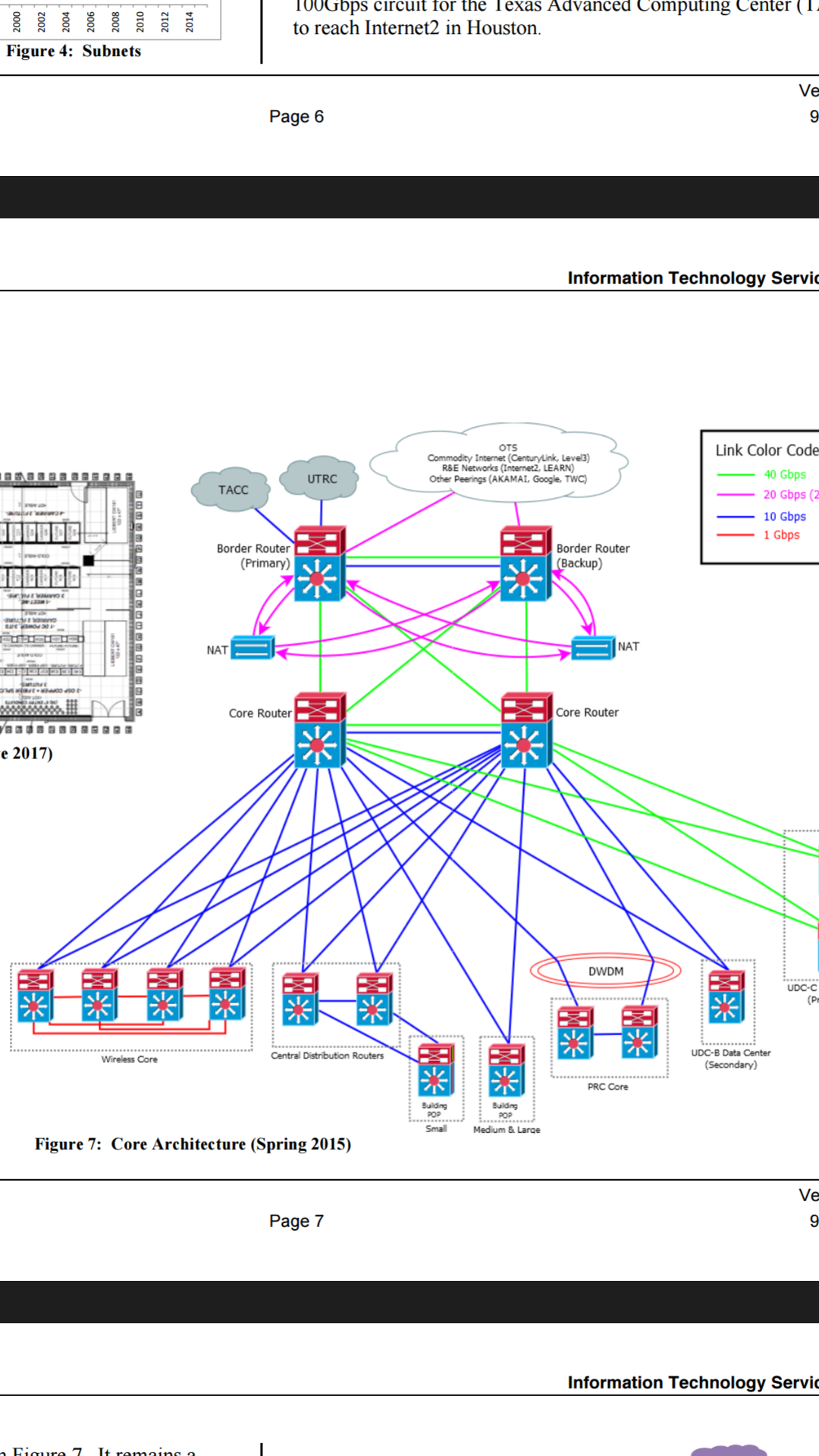 This is a university so most likely originally everything was on public IPs but as a result of the IP crunch there was a need to introduce private IPs.

Hooking up a couple of NAT boxes to the edge routers and adding source-address based routes to direct traffic to the correct NAT was presumablly the easiest way to introduce NAT at the network edge for traffic sourced from private subnets while allowing the traffic sourced from public IPs to continue flowing as before.

(note: any IPs used in this post are just examples and do not relate in any way to the real network the OPs diagram was taken from, I will assume that they are using 10.0.0.0/8 for private and 1.2.0.0/16 for public)

If the NAT box is attached only to border, there needs to be 2 links between each NAT box and border router, correct?

That probablly depends on the NAT implementation. I'm pretty sure iptables could do it with only a single link to the core router, other implementions may require seperate "inside" and "outside" links.

What you will need for this setup is border routers that can route based on source address (normal routing is based on destination address) so that traffic from private subnets gets directed towards the NAT while traffic from public subnets flows straight through.

Without physical constraints, isn't it better to add links for core <--> NAT <--> border while keeping current core <--> border links instead of attach the NAT boxes to border in the diagram?

I can see a few reasons why the setup they went for may be preferable to the one you propose.

Firstly I don't think you should discount physical constraints. The core and border routers may well be in different physical locations and adding an extra cable between those locations may be expensive.

Finally it may simply have been a case of the border routers having the needed features and the core routers not having them. Routing based on source address is a fairly advanced feature.

Its hard to say for sure without knowing the configuration. But my best guess would assume the two arrows of 20gbps links each indicate the NAT device sits "within" the edge routers. So something like:

This can be done using VRFs (or even VLANs). But again this is simply a guess, and no definitive answer can exist without looking at the configuration.

Not the answer you're looking for? Browse other questions tagged nat topology or ask your own question.

10
What layer of the OSI model does NAT work?
1
Does NAT affect the other networks on the router?
3
Asymmetric NAT rules matched for forward and reverse flows
6
How does NAT work for large private networks?
5
What is the purpose of subnetting, if we have NAT?
1
Source NAT and Destination NAT
1
What problem does Dynamic NAT solve?
3
What is the point of outside NAT?
0
NAT on the endpoint