The use case seems simple: No tagging should be needed, we just want each switch to behave exactly like two small switches. But just when cascaded, the last VLAN behind the second switch stops working (e.g. no DHCP).

Image 1 gives an overview: Our company uses three rooms. Spread over these rooms we need two VLANs. Since there are separate Ethernet cables available, we didn't plan to use tagging.

Thus we configured both switches as it can be seen in image [2]: No tagging, just access mode, 2 ports in VLAN 1 for maintenance (not connected while daily business), 16 ports in VLAN 2 for the yellow network, and 8 ports in VLAN 3 for the green network (office 2).

There are two cables connecting the switches, one for each VLAN. As a consequence of this we think there's no trunk needed, just port-based VLANs, isn't it? Within our company, there's no connection between the two VLANs.

When testing the switches separately, all is working fine - the VLANs seem properly separated. Just when we cascade the switches, VLAN 3 doesn't work behind the second switch (Office 1). I don't even get an IP address.

If I replace the 8 ports for VLAN 3 with another switch (e.g. Netgear GS108) all is working fine. Interesting enough, it doesn't matter if I put the Netgear for VLAN 3 next to the first switch (server room) or next to the second switch (office 1). So it's truly the cascade which brings up the problem.

Connecting a PC instead of the second switch for VLAN 3 works fine. But when I connect the switch, the same PC would not get an IP anymore.

What we tried so far without any success:

It's just switches, no routers, so I wouldn't expect trouble with DHCP. It should be transparent, isn't it?

Please, feel free to assume infinite stupidity from my side. My experience with these switches is limited. I'm pretty sure I'm doing something wrong.

However, any help is deeply appreciated - we're running out of ideas. 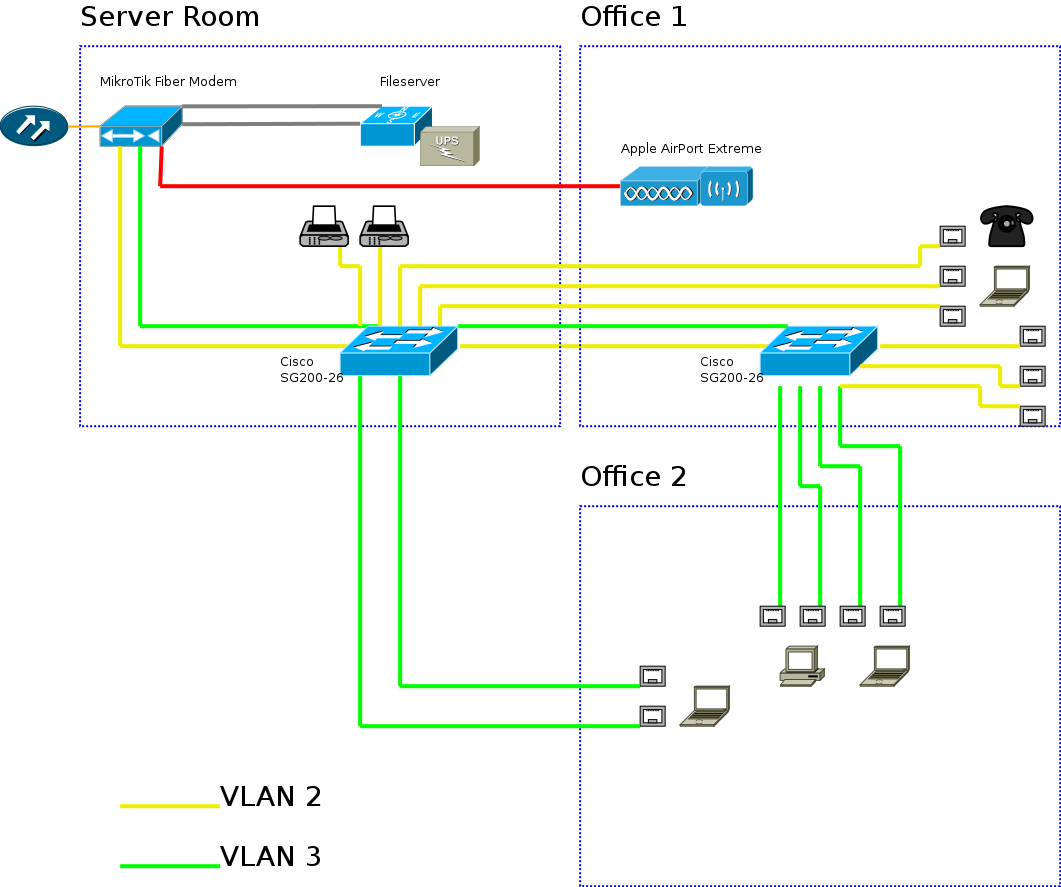 There are two cables connecting the switches, one for each VLAN. As a consequence of this we think there's no trunk needed, just port-based VLANs, isn't it? Within our company there's no connection between the two VLANs.

Here is your problem. By using two different links, you have created a loop in your network. The Cisco SG200 switches can't use per-VLAN Spanning Tree, so the Spanning Tree mechanism will disable one of those two links to prevent the loop from bringing down the entire network.

My advise: trunk the link between the two switches. You can use link aggregation (LAG) to increase the throughput if you want.

There is a LOOP between the SG200-26(server room) and SG200-26(office1) switches, i think your probarly need to implement some etherchannel to use the 2 links like one and get more bandwith. Once you do that, convert it into a trunk port and allow vlan 2 and 3, that´s it, its simple. By other hand, if you read your logs, you ccan see mac-address flapping between the 2 switches, and with that, topology changes. If you troubleshoot spanning-tree you can see that one of the 2 ports on one on the switches is in DISCARDING state, that is the reason why you can´t communicate on that VLAN

Not the answer you're looking for? Browse other questions tagged cisco switch vlan lan or ask your own question.