What is this node in packet tracer?

I figured this would be the best place to try and get an answer. So I'm following a packet tracer tutorial and it contains a node I've never seen before, nor can I find it, it seems to emulate (at least a part of) the internet.

I've tried recreating it using a cloud node and frame-relay, but then I realised the two routers connecting through it aren't on the same network. 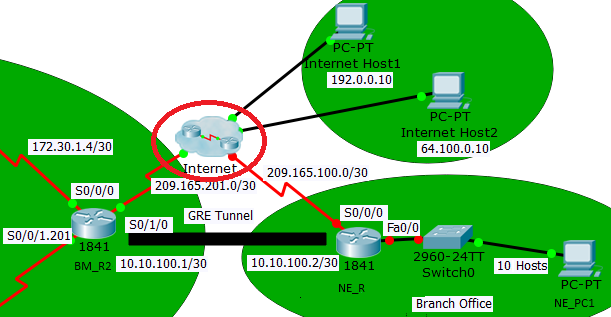 Does anyone know where I can find this node? It doesn't seem to be in packet tracer itself, maybe it's an add-on of some kind? Or is there something I have to configure in the cloud node (which it appears to closely resemble) for it to appear like this?

That's not a node, that's a cloud representing the Internet. You have no way of knowing how the Internet is connected, so it is represented as a cloud. It represents a whole lot of nodes.

Not the answer you're looking for? Browse other questions tagged packet-tracer or ask your own question.