I'm looking for an understanding of how the metrics are structured within EIGRP, this includes the routing table, and also the topology table. I'm sure I'm not the only one that finds the concepts of EIGRP a tad tricky to grasp.

My small network has been created and I've enabled an AS of 1 on both connections for an EIGRP neighbouring relationship. This is the output from both the routing table and the topology table:

I know that 90 is the administrative distance, but the metric of 30720 seems high going over fast ethernet to only one hop. Could any light be shed on why this is so high in comparison to OSPF for example? I understand that this is probably a simple case of apples and oranges being two separate routing protocols, but I'm interested to know how this is calculated.

As you can see from the above, the calculation is 30720/28160. The second part of this calculation also seems to be the feasible distance of 28160, with the first part being the metric of 30720 from the routing table.

Could someone please explain to me the purpose of this calculation? And will this figure change over time? Or is this now set in stone?

The EIGRP Metric is a combination of a measure of the entire path's cumulative delay, and the minimum bandwidth across the entire path. The delay value is value assigned to each 'hop' based upon that interface's speed.

The metric can also include factoring the interface's load and reliability, but this is often left disabled.

This is all controlled by what is known as "K values", each "k value" controls weather each of the following are considered in the EIGRP metric calculation.

If you re-write it with different spacing and add pretty colors and apply the default K Values, you can see how it gets simplified to just Delay and Bandwidth:

Which means the simplified formula, with just the default K values applied ends up being this:

Values for Bandwidth and Delays

The Bandwidth value is based upon the minimum bandwidth link across the entire path. But because metric values in any routing protocol consider a lower value to be superior, a formula has to be used to convert a higher bandwidth to a lower resulting metrics. That formula is as follows:

So a path with a minimum bandwidth of 100 Mbps link, would equate to 100,000 Kbps, and it's calculation would look like:

Delay is supposed to be a calculation of the amount of time it takes a bit to be transmitted to an adjacent neighbor. But in reality it is simply a constant value based upon the interface bandwidth. However, since this factor is additive, it essentially works as a hop count. Or maybe we should say a smart hop count, since it also factors each hop’s bandwidth.

The full list of each interface speed and delay value can be found here:
https://datatracker.ietf.org/doc/html/draft-savage-eigrp-00#section-5.5.1.2

The delay value used in the formula is the microsecond value divided by 10. For example, a path that consists of two links that are each 100mbps would equate to a total delay in usec of 200:

Which interestingly enough is the exact same value you listed in your question:

Which brings us back to another concept that you might have been confused about. Namely, it has to do with the output to this command:

The second value (28160) is what is known as the Reported Distance (also sometimes the Advertised Distance). This value represents the total EIGRP cost for my neighbor to get to the target network. This is the value the neighbor shares when advertising the route to the local Router.

It is possible to reverse deconstruct the Reported Distance (aka, the neighbor's cost) value of 28160.

We also know the full path is two 100mbps links, so obviously the neighbors path to the target network is one 100mbps link, or a total delay value of 10. Which means the Bandwidth value must have added up to 100, which we know it does when factoring a 100mbps link.

Which finally lets us speak to your specific questions. At least the ones that haven't already been answered above:

Could any light be shed on why this is so high in comparison to OSPF for example?

The Metric value is a 32 bit value, which means it can be any number between 0 and 4.2~ billion. The Metric is only considered if the network is the the same size, and the route is learned from the same routing Protocol. Which means what EIGRP considers as a metric will never be compared to what OSPF will consider a network.

So their relative differences are irrelevant. Because if a route is learned from OSPF and EIGRP, the EIGRP route will always be preferred because its Administrative Distance is lower (90 vs 110).

I understand that this is probably a simple case of apples and oranges being two separate routing protocols, but I'm interested to know how this is calculated

Correct, the EIGRP and OSPF metric calculations are Apples and Oranges -- not to be compared. The EIGRP calculation is described thoroughly above, or in more detail in this article.

If you want a run down on the OSPF metric calculation, I'd suggest asking a new question.

As you can see from the above, the calculation is 30720/28160. The second part of this calculation also seems to be the feasible distance of 28160, with the first part being the metric of 30720 from the routing table.

Could someone please explain to me the purpose of this calculation?

Keeping track of the Feasible Distance as well as the Reported Distance comes into play with a loop-prevention mechanism of EIGRP known as the Feasibility Condition. If multiple EIGRP routers share information about the same network, the Reported Distance of each incoming route can be compared to what the Router already knows as its best Feasible Distance to determine whether the newly learned path includes a routing loop.

And will this figure change over time? Or is this now set in stone?

Could any light be shed on why this is so high in comparison to OSPF for example?

You simply cannot compare metrics between different routing protocols. That is the reason for the creation of administrative distance.

Could someone please explain to me the purpose of this calculation?

EIGRP uses a complex calculation to come up with its metric. It involves the bandwidth, delay, reliability, load and MTU of a link, but, by default, it only uses the bandwidth and delay. The calculation can include many things that other routing protocols simply don't include, so you can get a very granular metric on which is the best path.

And will this figure change over time? Or is this now set in stone?

The metric for EIGRP has not changed since IGRP (it is 256 times the IGRP value), so it is unlikely to ever change.

EIGRP uses the minimum bandwidth on the path to a destination network and the total delay to compute routing metrics. Although you can configure other metrics, we do not recommend it, as it can cause routing loops in your network. The bandwidth and delay metrics are determined from values configured on the interfaces of routers in the path to the destination network.

For instance, in Figure 2 below, Router One is computing the best path to Network A. 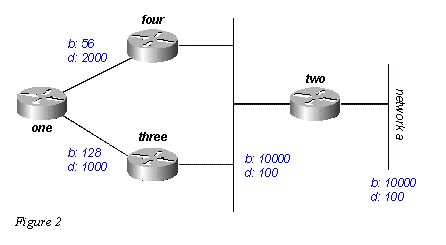 EIGRP uses the following formula to scale the delay:

EIGRP uses these scaled values to determine the total metric to the network:

Note: These K values should be used after careful planning. Mismatched K values prevent a neighbor relationship from being built, which can cause your network to fail to converge.

The default values for K are:

For default behavior, you can simplify the formula as follows:

Cisco routers do not perform floating point math, so at each stage in the calculation, you need to round down to the nearest integer to properly calculate the metrics. In this example, the total cost through Router Four is:

In this example, the total cost through Router Four is:

And the total cost through Router Three is:

So to reach Network A, Router One chooses the route through Router Three.

Plugging your numbers into the example that Cisco has given above:

I know that 90 is the administrative distance, but the metric of 30720 seems high going over fast ethernet to only one hop. Could any light be shed on why this is so high in comparison to OSPF for example? I understand that this is probably a simple case of apples and oranges being two separate routing protocols, but I'm interested to know how this is calculated.

You're right - it is like comparing apples and oranges :) For exmaple, RIP's maximum metric is 15 but doesn't mean anything when compared to an EIGRP metric of 30720.

In regards to the EIGRP metric being so high - part of the reason is because EIGRP multiplies its metric by 256 in order to be backward compatible with IGRP (EIGRP's predecessor). As per this Wikipedia entry:

IGRP uses the same basic formula for computing the overall metric, the only difference is that in IGRP, the formula does not contain the scaling factor of 256. In fact, this scaling factor was introduced as a simple means to facilitate backward compatility between EIGRP and IGRP: In IGRP, the overall metric is a 24-bit value while EIGRP uses a 32-bit value to express this metric. By multiplying a 24-bit value with the factor of 256 (effectively bit-shifting it 8 bits to the left), the value is extended into 32 bits, and vice versa. This way, redistributing information between EIGRP and IGRP involves simply dividing or multiplying the metric value by a factor of 256, which is done automaticall

When we run the figures you provided (Vector metric: Minimum bandwidth is 100000 Kbit Total delay is 200 microseconds) through this formula, we get the correct metric:

2
EIGRP advertisement suppressed with static entry
1
Why R1's topology table doesn't show feasible successor for 192.168.2.0/24?
2
Why am I seeing two different values for Feasible Distance?
1
OSPF and addressing problem
1
How to route two different networks
1
EIGRP metric claculation
1
EIGRP route redundancy in a ring topology
2
EIGRP advertising of routes for other networks behind us