I have a setup like this. (Yes, I suck at Paint) 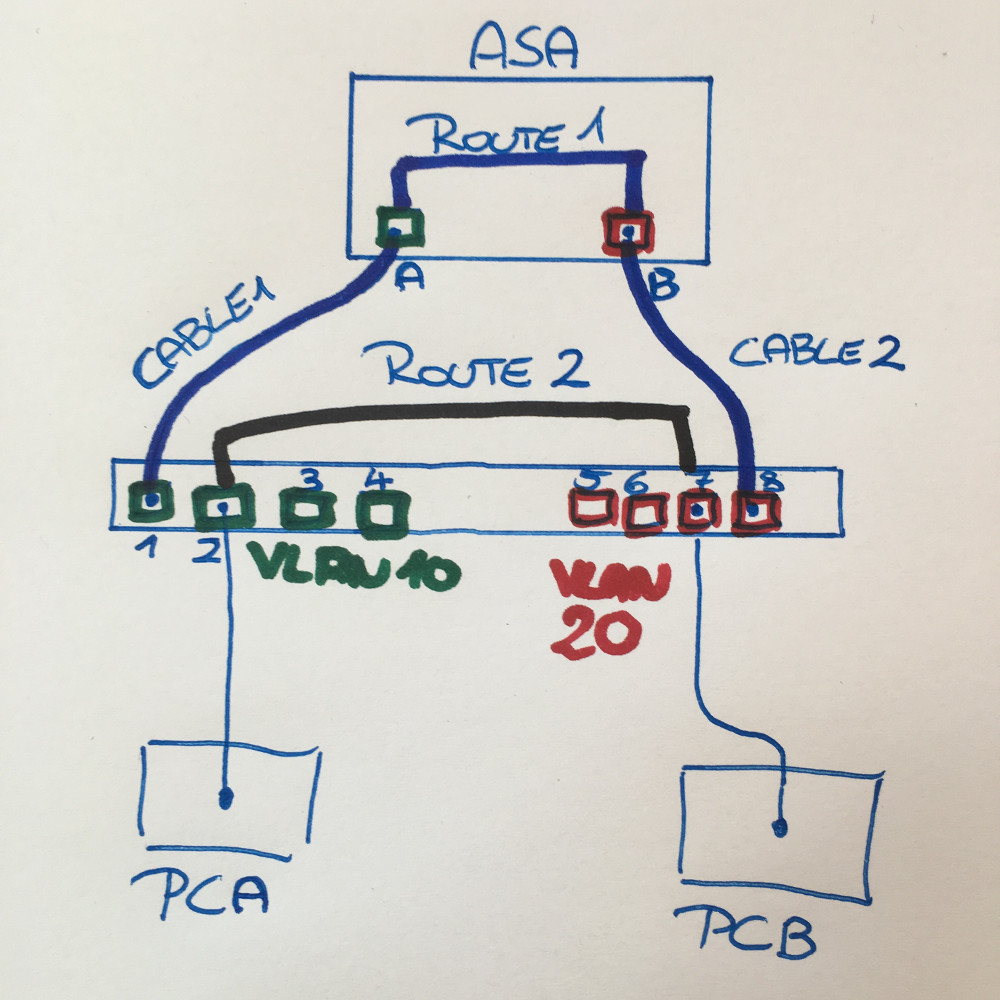 What I know is:

1) Only the ASA knows sees PCA AND PCB. Because the ASA is the only one who is connected to both VLANS. Am I right?

If I want to Download a File from PCB to PCA. Does the file (10GB big), uses Route1 (the blue one) for the whole 10GB file? OR does the ASA say to the PC something like "Hey the PC is connected to PORT1, you don't have to send the whole package over cable1 and cable2!" and then the File never leaves the Switch and goes over Route2 (the black one)?

I want to know this, because our Server and Clients are on different VLANS. If the file never leaves the Switch, I will put the Clients with the Server they need most often on the some switch.

Hosts on one VLAN cannot communicate with hosts on another VLAN, except through a layer-3 device, e.g. a router.

In your specific case, the switch will keep the traffic in each VLAN separate, and it will only send it directly from one host port to the other if it is a layer-3 switch with routing enabled between the VLANs, and it is configured in the hosts' as the gateway. Otherwise, if the only routing is happening on the ASA, the traffic will need to travel through the ASA.

Not the answer you're looking for? Browse other questions tagged cisco vlan cisco-asa firewall packet-path or ask your own question.

3
ASA vlans on multiple physical interfaces.
5
Multiple VLANs with same subnet behind single ASA
5
Dropping packets routed between VLANs
1
CISCO ASA5512-X no Console Output
1
How data flow via APs with a controller?
1
Routing on SG300 with VLANs
2
vlans - How to manage vlans in this scenario?
3
Pinging And Accessing Computers On 1 Switch with 2 VLANs
2
Cisco ASA 5512X does not allow connections across VLANs to internet
2
pFsense, Unifi AP, HP switch and VLANS