In an one-armed SLB configuration, SNAT is used to force return-traffic to pass through the SLB. This has one negative: simply that web logs cannot capture the true client IP unless passed in XFF (X-Forwarded-For) header and the web server is able to log.

An alternative is to use PBR (policy based routing) to get the return-traffic back to the SLB, but I try to avoid PBR unless there's no other/better solution On the 6500E platform with SUP720/PFC3B -- and I know the particular IOS version can be a factor too -- does PBR add any latency over doing SNAT assuming PBR is all done in hardware? If PBR is done in hardware using only the commands supported by it today, is it possible upgrading IOS in the future could change PBR to be done in software/process-switched?

Today, our load-balancers have most of the web server VLANs directly behind them -- default g/w pointing to SLB -- and other servers like SQL in non-SLB VLANs. However, this web-sql traffic transits the SLB. Our goal would be to avoid crossing the SLB and just keeping SQL traffic separate, and still retaining the true client in web logs. I'd prefer to not introduce troubleshooting complexity with PBR and possibly having this change from hardware to software processed in the future. Short of the XFF and SNAT mentioned earlier, is PBR the only option here and what's the best way to keep PBR tightly configured?

does PBR add any latency over doing SNAT assuming PBR is all done in hardware?

Sup720 supports PBR in HW, the additional latency (if any) is negligible because PBR doesn't add more interface queueing. I think PBR would make things harder than they need to be (and I'm still not even sure whether it would work... the specifics of that option aren't totally clear)

Short of the XFF and SNAT mentioned earlier, is PBR the only option here and what's the best way to keep PBR tightly configured?

PBR is not the only option. Your proposed option is a bit unclear, but PBR normally boils down to nothing more than a fancier way to do static routing.

Typically this is the best topology for load-balanced services that require SQL queries... 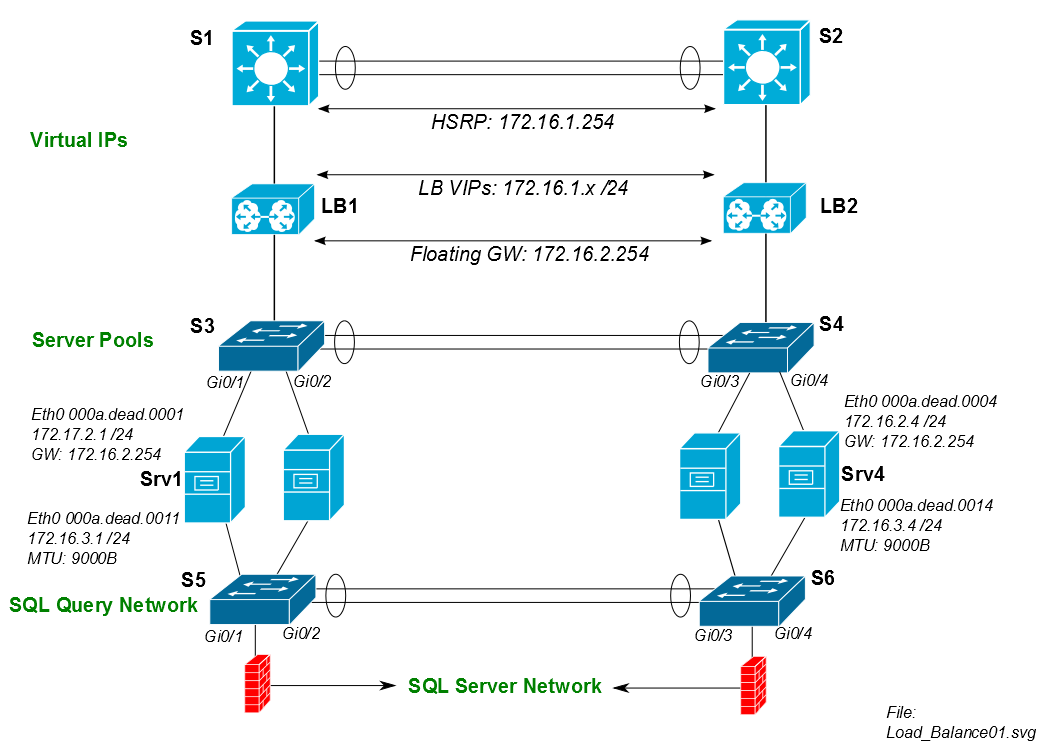 This topology has additional benefits:

Any one-armed load-balancer topology is a less desirable option since you wind up cutting your max throughput in half because of the one-armed topology.

EDIT for question about HW vs SW switching on Sup720

This is a deep topic, but I will give the summary version... Sup720 applies an ACL in each direction (ingress / egress) and the ACL must fit into TCAM based on whatever merge algorithm the platform has chosen. Sup720's Feature Manager (i.e. fm) is responsible for mediating the features into TCAM and reporting whether you have a punt adjacency (meaning SW switching), or whether the combination of protocol and direction is switched in HW. To isolate whether

The interface above doesn't show egress output, but that's irrelevant... the output is similar to the Ingress direction. Ricky Micky wrote up an outstanding explanation of 'sh fm fie interface' if you would like more details on the dynamics of TCAM banks / merge results.

If your load balancer supports it Direct Server Return would also do what you want. It needs to be supported by your load balancer and there are some operating system concerns. It involves putting 'loopback' interfaces in each server that all have the IP address of the VIP, the load balancer while having the real server addresses only use the MAC address of the real server to forward the packet, since server has the loopback interface with the VIP in it, the server accepts the packet.

You need to consult the doc of the specific LB vendor and your server teams have to be able to manage the virtual adapter (we do not use this feature because of we did not think our automated server provisioning could manage an MS loopback adapter.

But this does not use NAT in the LB and you don't have to do PBR.

Not the answer you're looking for? Browse other questions tagged cisco nat cisco-6500 pbr load-balancer or ask your own question.