CCENT student here and looking for some confirmation. Working on the ICND1 Odom book with a 2950 switch. I have a quick question regarding static MAC addresses, as per this passage:

Here is my output for show mac address-table command: 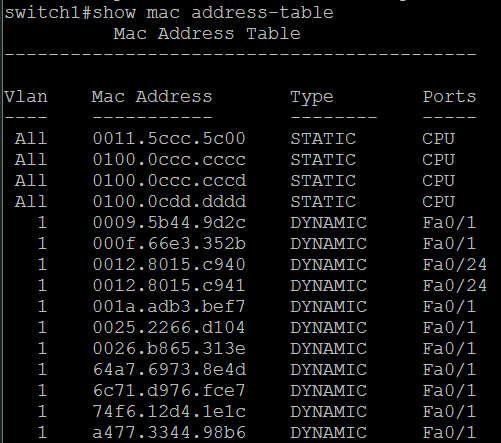 I appreciate any insight. :)

Am I correct in thinking that static MAC address are the mac addresses of the switch itself?

Yes, the first four MAC addresses belong to the switch itself.

Why are there 4 static mac addresses?

As per this link,

In the orange highlighted part of the textbook passage, what is meant by static mac addresses configured by port security feature?

You can use port security to define which MAC addresses should be seen on specific ports.

For the dynamic mac addresses (interface 1 and 24, which I have connected out to two other switches), why are there two, and not one, mac addresses entries learned per port?

Because it's a Layer 2 network. MAC addresses will be learned on every layer 2 device between the source and destination devices.

If you're interested in finding out which MAC address belongs to which device, you can look up the OUI of MAC addresses in your output. For example, I can see you've got a few Cisco, Linksys and Netgear devices.

Not the answer you're looking for? Browse other questions tagged cisco switch ethernet cisco-ios mac-address or ask your own question.

8
Something is filling my force10 ARP table
4
What happens if two hosts with the same MAC address are in the same broadcast domain?
4
What is EtherType 9C9D?
2
Why switch (2950) port configuration is needed when NIC adapter is configuired?
3
Why don't switch MAC addresses conflict
1
Cisco Switch ports and MAC addresses
0
Propagating Static MAC Addresses