If you see following diagram we have two separate links (10G) coming from same ISP terminated on ASR 1006 router where we are planning to run BGP. From ASR 1006 two 10G fiber terminated to L3 switch.

Notes: I know BGP doesn't make sense with single ISP but in future we have plan to get second ISP but for now we have only single ISP.

What are the best practice out there for this kind of network? 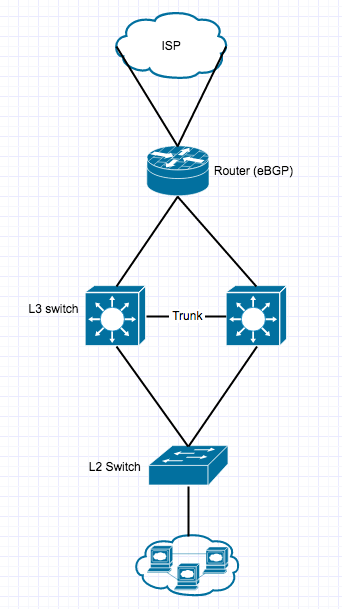 as per above diagram if i plan to configure OSPF between Router and L3 switch then what network i will advertise on OSPF network command?

Example: ISP provided 10.1.1.0/24 subnet to us how do i configure BGP and OSPF for internal network?

Form the BGP neighborship loopback interface. As per this thread:

The use of a loopback interface ensures that the neighbor stays up and is not affected by malfunctioning hardware, the main benefit from using loopbacks is that it will not bring down the BGP session when there are multiple paths between the BGP peers, which would otherwise result in tearing down the BGP session if the physical interface used for establishing the session goes down. In addition to that, it also allows the routers running BGP with multiple links between them to load balance over the available paths.

Doing this means that if the router fails your inter-vlan traffic will still work. Also, if you add additional routers to the topology at a later date, the switch will be able to use both of them for outbound traffic as opposed to only using your current one.

Here is another quote from the thread I linked to above:

what should i use to provide redundancy/failover between Router and L3 switch?

Not the answer you're looking for? Browse other questions tagged cisco switch bgp redundancy or ask your own question.