The Problem: Needing to disable 2.4GHz radio's to achieve the required density does not seem optimal. Am I going about this wrong?

I've used the following formula for AP density and number of radios:

At 40 seats per classroom, assuming each student has a laptop and a smartphone or tablet, with a target throughput of 3Mbps for laptops & 1Mbps for smartphone/tablets:

Total radios needed per classroom = 2.6. Each AP having 2 radios, this brings me to 1 AP per classroom; if rounding down. All classrooms are in use, and fully populated every day. Current client base shows about 30% 5GHz capable, campus-wide. I expect this number to increase rapidly as most clients are becoming 5GHz capable.

PDF picture is result of placing the AP/Antenna at the front of classroom (facing East, or away from the hallway). There is very little attenuation between the rooms (sheetrock walls). This is a 3-story building, with same layout on each floor.

One AP per classroom, with patch antenna mounted facing east, for classrooms which have an exterior wall (see diagram), except using Mechanical down-tilt on first floor to reduce the signal in the rooms 'behind' the Anetanna. 2nd & 3rd floors have antenna mounted as drawn, w/ no downtilt. Using 20MHz 5GHz channels, and disabling some of the 2.4GHz radio's, to reduce CCI.

Interior classrooms will utilize same patch antenna, again using down-tilt on first floor and not on upper floors. Disabling some of the 2.4GHz radio's. If down-tilt is utilized on 2nd/3rd floors, the signal penetrates the floors too much.

The picture represents the results of having an antenna mounted in room 222, pointing out/east/towards the exterior wall; and client RSSI readings from various locations. 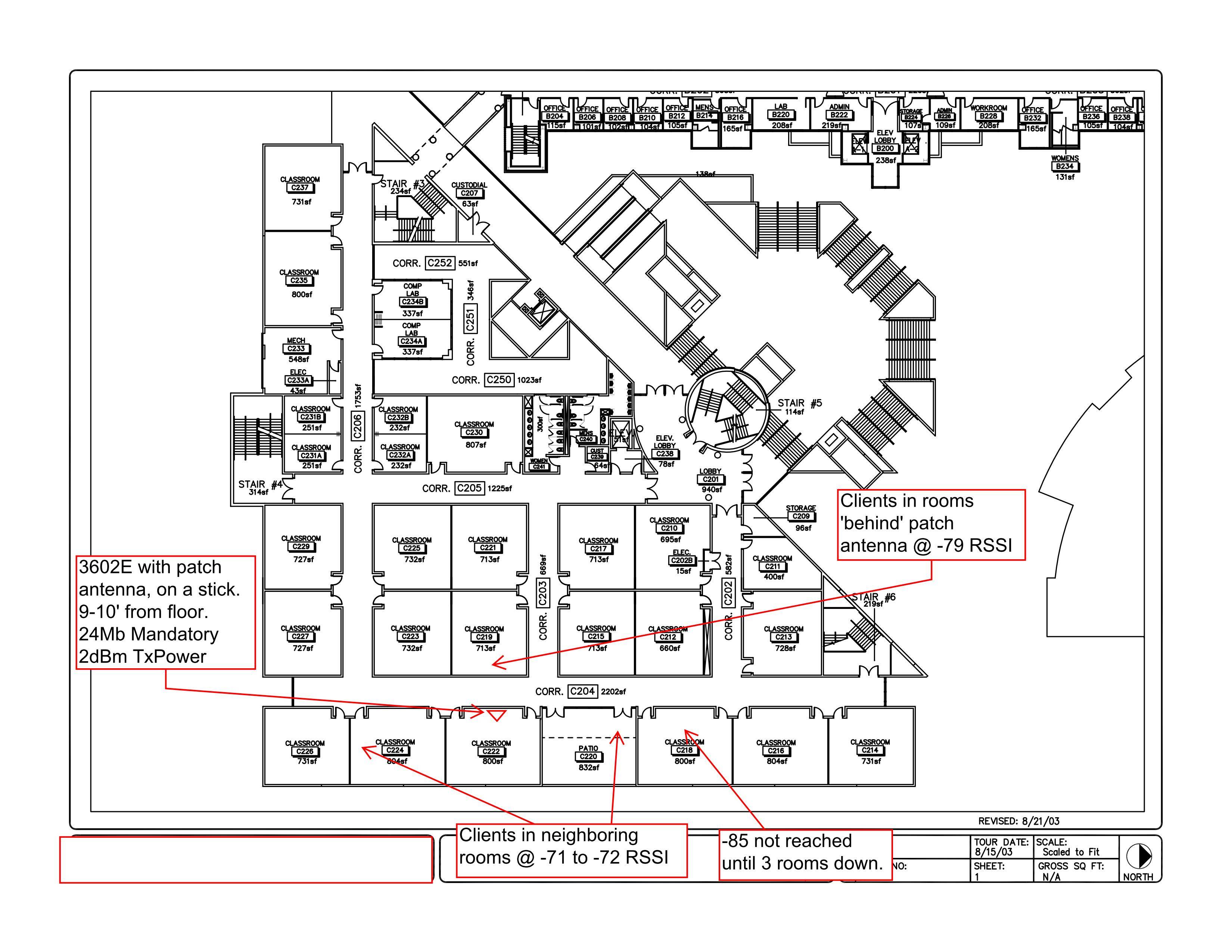 You seem to be going about this the right way (which is the only real question I can find in your post), but I will throw in a few more considerations and/or options.

10
Plexiglass and 2.4GHz wifi signal
23
Is it safe to use any wifi channel in the 2.4GHz band?
1
MacBook Air only uses 20MHz of a 40MHz 2.4GHz wifi channel
1
Will wifi networks on same 2.4GHz channel conflict if only 1 is being used?
1
High Range WiFi receiving antennas
2
Is it better to use channel 13 than channel 11 on 2.4GHz band
2
Is there a minimum signal level required for co-channel interference?
0
How to determine which Wifi channel offers the least interference?